Starting Classes With a “new Normal” in Mullen

Schools throughout Nebraska have different concerns and approaches as classes start and the coronavirus pandemic continues. Last spring NET producer Mike Tobias followed one Sandhills school’s journey into remote learning. For today’s NET News Signature Story he traveled to Mullen to find out how they’ll open doors this week. 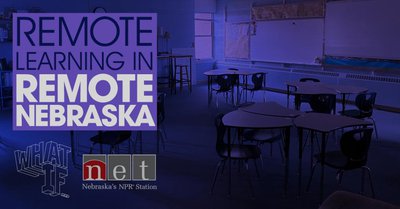 Our May 2020 radio documentary “Remote Learning in Remote Nebraska” tells Mullen students, teachers and parents dealt with remote education. Listen to it online at netNebraska.org/remotelearning. It's also part of our "What If..." project on innovation and creativity in Nebraska. 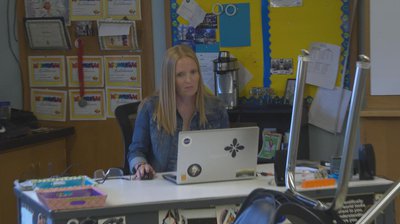 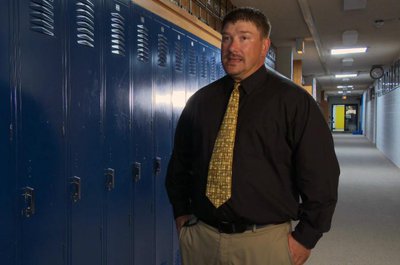 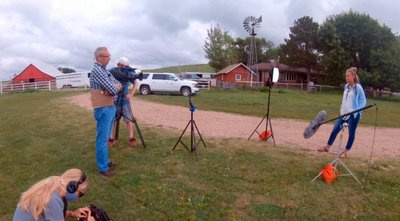 It’s middle of the week, middle of the summer. But there’s a lot more going on inside Mullen High School right now than in April and May, when COVID closed doors and forced learning to happen remotely. Sarah Hardin is getting her science classroom ready for the return of students, moving glass beakers back to shelves in a cabinet. Elsewhere other teachers are also working. Staff are cleaning and mowing. All preparing for an uncertain school year.

“So I have a lot of anxiety about this fall,” said Hardin, in her 15th year as a teacher at Mullen. “I think the biggest thing is that every teacher is going to have to be is flexible. Maybe it'll be better, but maybe the numbers will continue to go up and we might be in the same situation we were in last spring. So I think that idea of flexibility and constantly kind of thinking, ‘okay, if I have to change this, how am I going to do this next week?’”

“We've been preparing for this. Since middle of June, I think we were starting to look at this,” said Mullen Public Schools superintendent Chris Kuncl. He and a staff committee developed a color coded four tier reopening plan based on the number of positive cases in the area. Green, called “new normal,” means things like increased cleaning and sanitizing, directional hallway flow and limited visitors. Red is a return to mostly online learning. Yellow and orange are in between. They’ll start the school year green.

“Things have to change a little bit because we got to be cautious of everything,” Kuncl said. “We’ve got new hand sanitizers throughout the building. We got atomizers to clean the room. We have stocked up on bleach wipes, sanitizing wipes and all sorts of stuff. It was just a lot of stuff that we haven't bought a lot of in the past because it's just kind of the way it's going to look.”

Mullen has 165 K-12 students, including 55 in high school. Kuncl said whether or not to require them to wear masks was one of hardest decisions.

“The group just decided that it probably was in best interest to leave that decision up to the parents right now and go from there,” Kuncl said. “If we move up to a tier then it will be highly recommended to have a mask.”

“That's really difficult, especially the younger the child,” Hardin added. “I think that's a really tough thing to ask kids to do and ask teachers to do. It's an added responsibility of teachers, and so I think that's such a highly debated discussion still, at least in our region. I hope that if people do want to wear a mask, that they also feel comfortable wearing a mask in our building.”

“Typically all of my experiments that we do are done with a partner or in a small group,” Hardin said. “That's largely because I don't have enough equipment to say, carry out a chemistry experiment or do a physics project that might require a few simple materials. So the practicality of that is that I'm just not going to have the supplies. That either means sanitizing everything and maybe shuttling in kids, maybe half the class goes back and does the lab, half the class sits down and works on something else. But it's just not practical to not have shared supplies in a public school.”

All this discussion and planning is happening in a place far removed from COVID hotspots. About 500 people live in Mullen, and it’s the only town in Hooker County. Other counties that send students to this sprawling school district are also sparsely populated. But there’ve been four cases in Hooker County, including a Mullen student who tested positive after attending a summer prom event. Kuncl said this was kind of a wake-up call.

“We all knew it was out there,” he said. “It just hadn't hit home closely. It was good for everybody to realize that it can come to us. I think the fact that we didn't have any other exposures off of that helped a lot too, because it didn't spread tremendously fast. I think that helped calm and ease people a little bit about it, but we all know the seriousness of it too.”

“You know, I kind of expected it,” says Jordyn Phipps, parent of two Mullen students. “I expected it actually a long time ago. I'm shocked it’s actually taken this long and I only expect the cases to rise in our area. I mean, a lot of us are starting to break out of our shells a little bit.”

Phipps and her family live on a ranch an hour from Mullen. Her first and fourth grade girls are excited to go back to school. But Phipps knows it’s day-to-day.

“It's been a roller coaster ride for everyone. So I do hope that Mullen Public Schools is able to get back in the classroom and hopefully be able to complete a school year. But you know, at least us parents know now what to kind of expect now with that remote learning.”

After dealing with it in the spring, Mullen educators and parents feel like they’re ready if they close again this fall. That doesn’t make opening the doors easy.

“I do have some concerns about my own health,” said Hardin, who’s also a Mullen Schools parent. “I think that weighs on my mind a little bit and I think my concern for my own family is there too. I have two students who will be in this building and I think that's a reality that you at least have to think of it in terms of your own health and safety.”

“I've joined a lot of groups this summer that are national based, like social media groups for teachers specifically for science educators, and it's really interesting,” Hardin added. “The fears that we have in small town Mullen are the fears that every teacher has across the country right now. Number one, the safety of our students and number two, the safety of staff and number three, making it a positive experience for kids. It's really interesting to interact with teachers across the country right now, because I don't think any teacher is going into this year without some sort of anxiety over the situation.”

They want to see students. In person. But they want everyone to be safe. How that plays out this fall is the question educators in Mullen and everywhere else can’t answer.

“What are the chances we go remote? Give me a crystal ball and I'm going to answer it, but nobody has that crystal ball to see where it's going,” Kuncl said.

(Listen to this story HERE)

Madison Jones graduated from Mullen High School last spring. Her perspective on remote learning was featured in our May 2020 radio documentary, "Remote Learning in Remote Nebraska." We caught up with her again this summer, as she was preparing to start classes five hours to the east, at the University of Nebraska-Lincoln.

"I'm a little bit nervous," she said. “I think everything might start off really well. And then someone's going to come to class and we're all going to have to quarantine. So I think eventually it's all going to get moved online.”

Mike Tobias, NET: “Is it hard knowing that this is going to be the beginning of your college experience?

Jones: "Yeah, it is kind of upsetting. I do just want to have a normal college life, but that's one of those things. There's nothing I can do about it, but make the best of it. And I feel like this is going to be life for a while from here on out.”

Tobias: “There's some students, some places that are talking about taking a gap year. Did you think about that at all?"

Jones: "No. I probably could go find a good job for about a year, but I love to learn. I can't just go to a job and do that for a year. I always want to be in the classroom.”

Tobias: “Is there a concern when you come from a small school, a town of 400 or so, and the increased exposure of now living in Lincoln?"

Jones: "Yeah. I am a little worried about it. Like here, it's still kind of to the point where you don't have to wear a mask, if I want to go get my mail and stuff. And it's a little bit sheltered. Now, when I go to a bigger town, I think it's going to kind of be a culture shock, honestly. I'm not going to be ready for it. I don't know what's going to happen. “When I came and talked to you guys, I immediately wanted to shake your hands and I was like, 'Oh, I can't.' I think that's going to be hard with making first impressions on people, too, but I'm sure we'll find some new way to 'arm five' or something."

Jones: "All I can do is try to make the best of it, live every moment that I'm in class as well as I can. That's all I can do, no reason to be upset.”