Flooding in Nebraska from a bomb cyclone began four and a half months ago. Much of the water receded in the first week, but areas of southeast Nebraska are still under water. For people living and working in the area, and for the ecosystem, having standing water for months on end presents new challenges.

Driving down a county road near Peru, Nebraska, it would be easy to think you’d come upon a beautiful lake.

Brett Adams, pointing through the windshield of his pickup truck, remembers it as something else.

“In front of us, this is all my farm property, everything you can see. So, of course, all under water," Adams said. "Of course I got a bin site up over there, all the bins are broken open from the corn that was in ‘em. That’s our main shop. That was my parents’ house up there. But yeah, this is it. It’s been like this since March.”

On March 16, a nearly 70-year-old levee on the Missouri River breached, inundating Adams’ land with water. Unlike other areas where flooding receded in a week or so, the water here shows no signs of leaving soon. 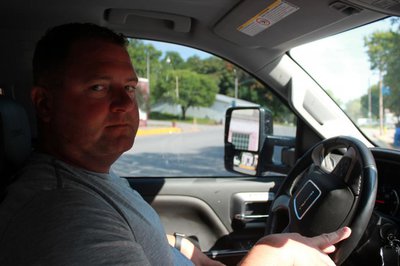 “It’ll be here ‘til winter. I mean, I was optimistic about September months ago, now I’m October, now I’m pushed out ‘til I don’t know when,” Adams said.

In addition to the time it would take to get things back to normal, Adams expects fully restoring his land and structures will cost millions of dollars. He doesn’t yet know the full extent of the damage.

“This water’s never gone down," Adams said. "We don’t know what kind of erosion we have, it could be ditches, we don’t know how much sand we got. I don’t think we have a lot of sand because we’re far enough from the large major breach.”

Flooding damages farmland and the bottom line for farmers, but it also affects the ecosystem.

Jessica Corman is an assistant professor in the Department of Natural Resources at the University of Nebraska-Lincoln. She said normal flooding can benefit the ecosystem by moving nutrients.

“But with the flooding that we saw, it’s been so extensive and so persistent that those natural benefits of the floods are really probably lost in the system,” Corman said.

Over time, standing water starts to affect the chemistry of the soil as well. Water affects the amount of oxygen in the soil, which in turn can release chemicals. Soil that's been depleted of oxygen is anoxic. 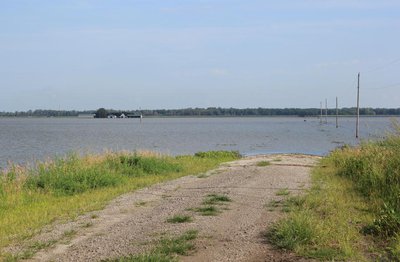 “A good example is phosphorous. So, phosphorous likes to bind pretty strongly to soil, except when things go anoxic, and then that phosphorous is now released," Corman said. "So that’s problematic because phosphorous, when it’s released into the water column, then let’s say it flushes downstream to another lake, another river, can cause unwanted algal blooms or cyanobacterial blooms that turn our waters pea soup green, basically.”

Flooding also contributes to chemical concerns that are common in the agriculture industry.

“There is a concern of contaminants coming from farmland into the rivers," Corman said. "And that’s really, I think, a perpetual concern in agricultural areas, is how to we keep the chemicals that we used on the land where they do their job and not in our water systems where they can do harm."

For all the harm that flooding can cause, Corman said it’s part of how the natural systems here work.

“Streams in Nebraska naturally flood. We’ve done a lot to prevent that flooding in many areas to keep the water off of the crops when we don’t want the water there," Corman said. "In other parts of the state, like along the Platte River, we’ve done a lot to actually encourage that flooding to happen again by creating wildlife habitat and whatnot, and the great thing about that is that it also has a side benefit of allowing those parts of the river to flood a bit more easily when they can.”

Corman said this year’s floods will serve as a learning experience about how we manage land and control flooding.

“And it might be, you know maybe, land that we thought we could farm before, we can’t because it’s in a flood zone or just sort of understanding those processes," Corman said. "There’s always been a tension between flood plains and agriculture because flood plains are naturally great places to farm because they flood. And so, getting that balance right is tricky in a dynamic system.”

Back in Peru, Adams thinks his land will still be farmable after this year, but he hopes this year’s flood will lead to updates in a system where some levees haven’t changed since 1950.

“I hope it’s really evaluated like, man we really need to look at this whole system as a whole and figure out the best way to repair it and improve it for the future and not just throw a patch and a band-aid here and there, and then it happens again, hopefully not sooner than later,” Adams said.

As Adams hopes for recovery for the levee system, farmers and scientists alike are hoping for a full ecological recovery as well.