Half the seats in the Nebraska Legislature are on the ballot in Tuesday’s primary election. Here’s how one race for Omaha’s 7th Legislative District shows how changing demographics are reflected in politics.

Legislative District 7 stretches from downtown through south Omaha. It’s a diverse district of gleaming skyscrapers and modest homes, where nearly one-third of the residents live in poverty and about half are Hispanic, according to census estimates. Registered Democrats outnumber registered Republicans here, two to one. 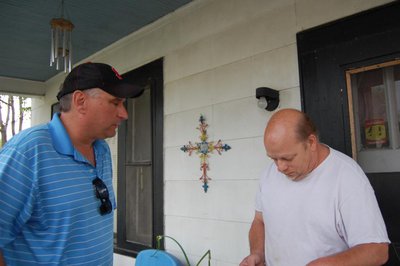 This south Omaha district is a place where some family connections and historic ties go way back. Synowiecki, forced out of the Legislature by term limits eight years ago, is counting on that to help him win in a new try for his old office when he knocks on the door of voters like Don Dischinger. Synowiecki talks about being born and raised in South Omaha, representing the district from 2002-2009, being on the Deer Park neighborhood association.

“Pretty significant connections to south Omaha, we hope that means something to you," Synowiecki said. Dischinger says he knows Synowieki’s from his family-owned Dinker’s Bar, and assure him it does. 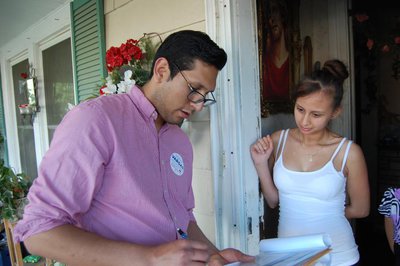 Last week, Synowiecki was concentrating on contacting people who have voted frequently in recent elections or registered recently.

When Synowiecki first started representing this district in 2002, only about a third of its residents were Hispanic. Now, that’s up to about half. A second candidate in the race, Omaha School Board member Tony Vargas, was focusing on those voters in his door-to-door campaigning last week.

“Me llamo Antonio Vargas” – I’m Tony Vargas -- he introduced himself to one woman. “Yo quiero ser el primer latino senador representando nosotros en sur de Omaha” -- I want to be the first Latino senator representing us in south Omaha. 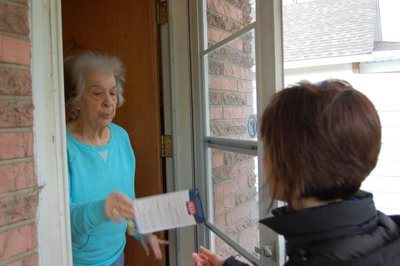 The Seventh had the lowest turnout of any legislative district in the primary four years ago – fewer than 2,000 of its 27,000 voting-age residents cast ballots. Vargas, whose parents emigrated from Peru in the 1970s, hopes campaigning in English and Spanish can change that.

“Voter turnout for Latinos is lower than every majority subgroup, Caucasians, in the district. And there’s probably a reason for that. The reason is, most past elections have not focused on trying to meet them where they are,” Vargas said. 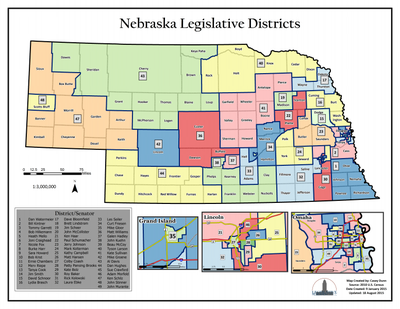 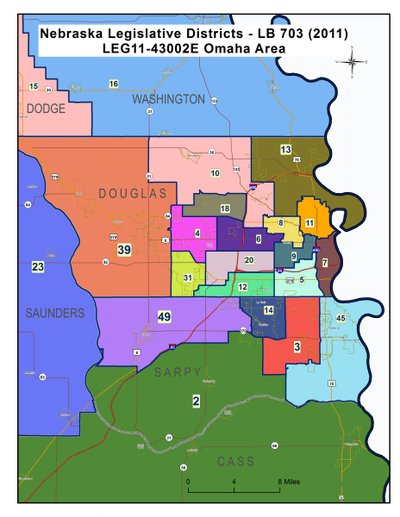 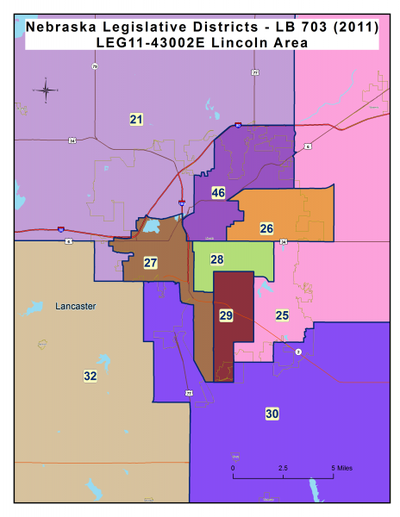 Running against both Synowiecki and Vargas is the incumbent, Sen. Nicole Fox. Fox has been in office since last August, when Gov. Pete Ricketts appointed her to replace Sen. Jeremy Nordquist, who resigned. Fox, too, is concentrating on frequent voters and new registrants, as she talks to voters.

“I’m a concerned citizen and just kind of an everyday person, single professional female. My biggest concern is taxes. I’m tired of seeing more and more of my paycheck going to the government and I think Nebraskans deserve to spend their own hard-earned money,” Fox said.

Fox, a medical nutrition therapist with Nebraska Medicine, says she’s stressing her pro-life, pro-Second Amendment views, and opposition to higher taxes. Vargas, who taught with Teach for America and now works for Leadership for Educational Equity, a school reform group, says he’s talking about improving education, expanding health care, and helping small business. And Synowiecki, who works for Catholic Charities, says he’s campaigning on small business development, expanding mental health and substance abuse services, and tax reform. A fourth candidate, Tonya Ward, a member of the Learning Community Council of Douglas and Sarpy Counties, who’s running as a write-in candidate, could not be reached to talk about her candidacy.

The Seventh District is just one of 25 seats in the 49-member Legislature that is on the primary ballot. (For a list of legislative candidates by district, click here).(To see who's funding the campaigns, search by the candidate's name, here). In 12 of those districts, the primary will make no difference. That’s because in four districts, there is only one candidate, and in another eight, there are only two, so both candidates will advance. But in the other 13, there are at least three candidates, so as in the Seventh district, only the top two vote-getters will advance, and the rest will be eliminated.

Before that happens, the candidates still have a little time to make their case. But the timing can be challenging, as Fox found out when she tried to tell Josephine Humpal more about herself.

“Are you Republican?” Humpal asked.

“Well I’m not," Humpal said, while quickly adding, “That don’t make any difference does it?”

“I was going to say let me tell you a little bit about myself – you might like me,” Fox ventured.

“Well, Honey, I already like you and I’m kind of busy ‘cause I got stuff on my stove,” Humpal said.

Candidates have until next Tuesday’s primary to make their case to voters, who will then determine which ones advance to November’s general election.