Sold for sex for 10 years, starting at age 6

How does someone get sold for sex in Nebraska? As part of our ongoing special reporting project on sex trafficking in Nebraska, Mike Tobias has the story of one trafficking survivor.

(Please note that this story deals with subject matter of an adult nature.)

Rachel Pointer stands on a side street in a midtown Omaha neighborhood, looking at a pair of boxy two-story houses separated by a driveway.

“We moved here the year that I turned six, so this is that house that we were living in,” she explained, pointing at one house, then the other. “This is the house next door where this all started at.” 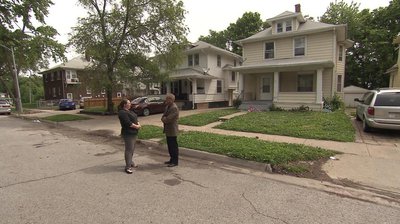 Rachel Pointer (left) and Mike Tobias of NET News talk outside the midtown Omaha house where she lived as a child (Image by David Koehn, NET)

What started here and continued for a decade is hard to comprehend. Six-year-old Rachel had a friend next door. The friend had an older sister. The older sister had a boyfriend. The boyfriend raped Rachel. Then he started selling her.

“He used my friend, threats against him first of all, you know, ‘if you don't do what I'm telling you to do, then I'm going to hurt him.' Those kinds of things as ammunition basically to rope me in,” she said. “And then started with threats against my family and other people that I knew.

“First it was just random other people coming over to the house next door and then it was like, ‘well, I think that we can probably do more or get more out of you, so let's go to the house down the street, or around the corner, or across town.’"

It wasn’t always the same person selling her. Pointer said after a few months someone else “took over that role.”

“But you always knew who was in charge and who was going to follow through on whatever threats that they made when they came along,” Pointer said.

It was surprisingly easy for this to happen without anyone noticing. Rachel said her childhood house was chaotic and full of siblings, most younger than her. The kids were homeschooled and there weren’t regular doctor appointments. In other words, there were no outsiders to see what was happening. The traffickers would tell Rachel to do things like fake an illness and go to bed early, then sneak out her second floor window and climb down a trellis to be sold for sex at night.

“Drugs and alcohol became part of the picture at a very young age, 7, 8, 9-years old,” she explained. “Cocaine mostly and alcohol. Not a lot in today's terms, but enough to take the edge off and to keep me up and to keep me compliant.

“You know people are really good about not leaving marks, super obvious marks. A lot of my bruises and things like that were in places you wouldn't see unless you were bathing or something along those lines. You get up the next morning and maybe you don't feel good and maybe your ribs hurt and it's hard to walk today,” she remembered. “More obvious to everybody I was an emotional wreck because you can only block it in for so long.”

Rachel said this was her life three, four, five times a week. For 10 years.

“I don't know that I necessarily processed anything beyond surviving from today to tomorrow or figuring out how to keep my mouth shut long enough so that I didn't actually say the wrong thing to the wrong person.

“When I got older, when I was a teenager, I started not being able to make as much. I wasn't as profitable. After a while, it got to the point where I was very uncooperative. It sounds so weird to say those kinds of things, but in terms of business I wasn't profitable anymore and basically said, ‘You either need to let me go, or you need to do whatever you're going to do because I'm done. I can't keep doing this anymore.’”

The traffickers made one final threat of what would happen to Rachel and her family if she ever said anything, then it was over. She never heard from them again. There was no investigation, no charges, no punishment for the men who sold her and those who bought her.

Back outside her old house in a neighborhood she rarely returns to, Rachel said “places leave a mark on people, but really it's the people that make them what they are.”

It doesn’t seem right to call this a childhood home because in many ways sex trafficking stole her childhood. But 26 years after she was first sold for sex, Rachel is now married, has a college degree and a job working with youth. She also fights trafficking through her organization, the Free the People Movement, and by talking openly about what happened.

“I can’t go back and change all of that. All I can do is work forward from where I am and recognize that there's still pieces of me that I'm trying to collect and put back together. But this is a part of my history. That's not going to go away. That's not really going to change. What I can change is our future, my future, and hope that somebody else doesn't have to be in this space experiencing what I experienced.”