Solar power on the rise in Nebraska

When people talk about renewable energy in Nebraska, they’re usually talking about wind power. But the use of solar power is on track to more than quintuple in the state this year, with the prospect of more to come in the future.

It’s a windy afternoon at a construction site on the western edge of Lincoln. Weaving through a field where thousands of metal posts jut from the ground, construction workers hoist tabletop-sized solar panels up and bolt them into place.

More than 15,000 panels are being installed over 20 acres here, in what will be the state’s largest solar installation, just north of the interstate.

“We’re pretty happy with the location, being right along Interstate 80. It should make a nice landmark for people coming and leaving Lincoln. You’ll be able to see it pretty well,” said Scott Benson, manager of resource and transmission planning for the Lincoln Electric System.

When it goes online next month, the project will generate 3.6 megawatts, which is enough to power about 900 homes. Benson says 1,300 LES customers have voluntarily agreed to contribute, starting at $3 a month, to bring the community solar project to Lincoln. A private company, Enerparc, is building and will operate the facility, and LES will buy the power that’s generated.

David Bracht, head of the Nebraska Energy Office, says the state started this year with only around 1 megawatt of solar power on line. That’s enough to power roughly 250 homes. The Solar Energy Industries Association, a trade group based in Washington, D.C., ranked Nebraska 48th among the 50 states and the District of Columbia for installed solar capacity, ahead of only Alaska, North Dakota and South Dakota. But the Association’s research director, Shawn Rumery, says Nebraska has the potential to rank higher – 38th for rooftop solar panels in urban areas, 10th for bigger installations in rural areas.

“Nebraska ranks relatively low in rooftop pv (photovoltaic) potential, because you don’t have as many homes there as California or Texas would. But you rank relatively high in, I think, rural utility scale because you have a lot of land without any shade,” Rumery said.

“In California, the retail rate that a residential customer would pay is probably more than double what a customer pays here. And so consequently, long ago that solar panel made a lot of sense to that customer in California,” he said.

But Bracht says a 30 percent federal tax credit on solar power investments, available to both homeowners and businesses, has spurred innovation and dropped the cost of generating solar power by almost 80 percent over the last six years. (For information on low-interest loans for solar projects, click here).

That and other factors have contributed to an increase in solar business in Nebraska, says Graham Christensen, who runs a solar consulting and contracting business.

“It’s been a long, kind of gradual process. I think the trends are that it is picking up. A lot of folks are really wanting to know how to make this work, both on an environmental side but also just on a business standpoint. All those trend lines appear to be good, whether it’s in the country or in Nebraska,” Christensen said.

Christensen says there are still some challenges. Nebraska’s “net metering” law requires utilities to buy any excess power generated by customers with solar panels, but only from systems up to 25 kilowatts. Christensen says that’s more than enough for the average homeowner, but not enough for others.

“If you’re a little bit bigger than a mid-sized farm, you’re over that 25 kilowatt threshold pretty easily. So you can’t really justify after that point to power your operation in an economical fashion,” he said.

When the net metering law was adopted in 2009, utilities argued that allowing it for larger solar generators could cost them more money for bigger lines to put the power on the grid.

Another factor that has spurred solar development in other states is a direct production credit for every kilowatt hour generated. That’s been proposed in Nebraska, but never passed.

Still, Bracht said he expects more solar projects in the future. Bracht says solar projects, which are built to produce much smaller amounts of power than even one wind turbine, could be an increasingly good fit for Nebraska’s smaller public power districts and communities.

“I think when it comes to solar, particularly community solar, the fact that we are 100 percent public power actually is supportive of community solar developments,” he said.

Bracht said with the Lincoln project and other smaller ones built or under construction this year, Nebraska will add around five times as much solar power this year as it had at the end of 2015. For information on solar projects in Nebraska, click here. 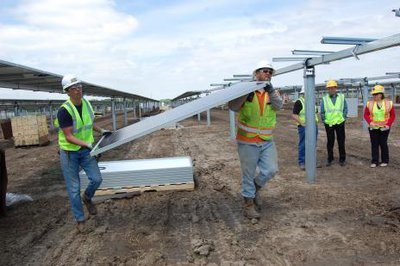 To see video of panel being installed, pic.twitter.com/UcCMvfGi1k

Editor's note: This story has been changed to clarify that solar power from the LES installation does not go directly to the homes or businesses that contribute to the project.