Peaceful Protests Turn to Violence in Lincoln and Omaha

The protest was one of many across the country after George Floyd, who was black, died while being taken into custody by a white Minneapolis police officer, Derek Chauvin. Chauvin and three other officers have since been fired from the police force. Friday, Chauvin was charged with third-degree murder and manslaughter.

Lincoln Mayor Leirion Gaylor Baird spoke at a press conference Saturday morning and offered condolences to Floyd’s family and those impacted by violence against African Americans.

“Not only do these tragedies harm the family and loved ones of those who are lost, they weaken the fabric of our entire society,” Gaylor Baird said. “We are all angry at the continued violence, racism, and unequal treatment inflicted on African Americans and people of color across our nation. We have seen it happen time and time again and we are outraged.”

Gaylor Baird went on to say protests in Lincoln have largely been peaceful and calls for change must not be “perverted by violence.”

LPD reported arresting three people who have been charged with failure to disperse. 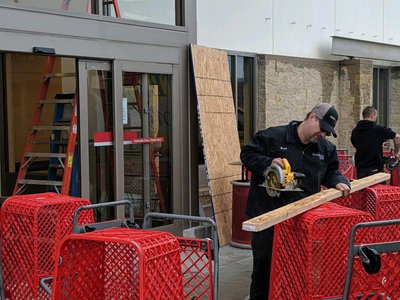 A worker at Target in Omaha cuts wood in the aftermath of Friday's vandalism. (Photo by Jack Williams)

Eight police officers were injured, including one who required staples to his head after he was hit by a projectile. One pedestrian was also injured in a hit and run auto accident near the scene.

The Lincoln Police Department said they are investigating nine incidents of vandalism. The most extensive damage is reported to a business at 25th and O Street. They also reported damage to three police cruisers.

LPD said they are working with organizers of a Black Lives Matter peaceful protest planned to take place at the Capitol Sunday and have been talking with them throughout the week.

Meanwhile in Omaha, peaceful protests early in the evening turned to violence around 8:30. They centered on 72nd and Dodge, one of the busiest intersections in the city. Later in the evening, the intersection was shut down to traffic by police.

Omaha Mayor Jean Stothert addressed members of the media during a press conference about Friday’s protests.

“Last night for a while it was a peaceful demonstration and protests and then it did turn violent. And when people turn violent and they deliberately destruct property, that's when the police have to move forward and they have to act,” Stothert said. 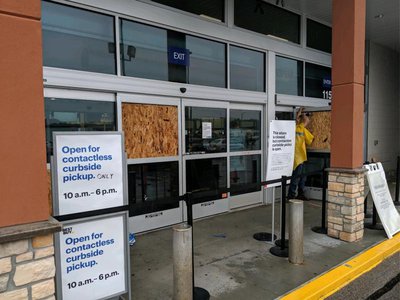 Some of the damage at Best Buy in Omaha following Friday night's protests. (Photo by Jack Williams)

“From my viewpoint of the scene, I thought the Omaha police department and our cooperating agencies, handled the events that were presented to us in the most professional manner as we possibly could,” Schmaderer said.

By 10:00 p.m., Schmaderer says protesters began targeting businesses for destruction. There were 12 businesses in the area vandalized, many with broken windows. At its largest, the crowd grew to 1,000 people. There were also police cruisers damaged by vandals.

Schmaderer says of those arrested, 16 were white, three African-Americans and two were Hispanic.

He expects another night of protests but asked people in Omaha to keep them peaceful.

“Even if it's directed at us, we understand what's going on. We see that side of you have the anger and the tension across the country,” Schmaderer said.

In the aftermath Friday evening, three people had minor injuries, one civilian and two officers. There were twenty-one arrests made for various charges including destruction of property, failure to disperse to carrying an illegal firearm.