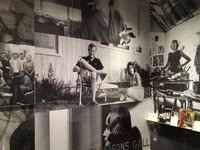 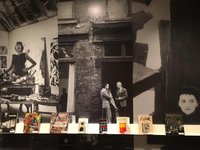 The Sheldon Museum of Art in Lincoln has more works from its permanent collection on display than at any other time in recent years. The current exhibitions feature some of the museum’s most notable works and demonstrate the strength of its renowned collection.

The Sheldon Museum of Art started collecting works in 1888. In the last 130 years, acquisitions and donations have grown the collection to 12,000 objects, said Museum Director Wally Mason.

Mason said he realized the Sheldon had collected many objects from a certain time period—1938 to 1970. That led to a current exhibition called “Now’s the Time,” highlighting the museum’s collection of post-WWII art known as abstract expressionism or the New York School.

“One could argue it's the first true American art form,” Mason said. “It parallels things like bebop and jazz, the beat poets, really not referencing anything, it being an abstraction in and of itself.”

While these works may seem easy to grasp nowadays, Mason said their nonrepresentational nature was difficult for people at the time accustomed to a different kind of art. Many of the paintings on display are large and colorful with indistinct shapes that convey a feeling of movement.

“What bebop did for jazz is essentially say, it is not danceable. It is not background music, it is simply there for you to listen, sit down and pay full attention to. The paintings and sculptures in these three rooms had that same effect. They ask you to look at them and be fully engaged. They are not decoration. These are works that are very active, they ask a lot of the viewer,” Mason said.

Though most of the New York School abstractionists were men, Mason pointed to a work called “Red Frame” (above, Sheldon courtesy photo) by woman artist Helen Frankenthaler, who he said was an exception to the hard-drinking, womanizing, self-obsessed image cultivated by artists like Jackson Pollock. The work is an example of color field abstraction, he said, and pointed to the label, which shows a photograph of her painting on the floor.

“So suddenly the easel is no longer the place where the art is made, it's actually created on the floor because the experience now is the scale of the body. That was revolutionary,” he said.

“The other thing that goes on here is that the paint is suddenly, in a sense, diaphanous. It's very diluted down, it moves easily, the manipulation is with sticks, it can be with squeegees, it can be with brushes, but it's very much the extension of the body,” Mason said.

During this period the art world moved from Paris to New York as American artists developed a new pictorial language that didn’t reference Europe, Mason said, but instead echoed the unstructured, dynamic nature of cultural developments at the same time like beat poetry.

He walked over to another painting by Hans Hofmann from 1958 called “The City” (below, Sheldon courtesy photo). Many of the artists in this exhibition studied with Hofmann at his eponymous school of fine arts.

Perhaps the most famous piece in this exhibition is a work by Mark Rothko, called "Yellow Band" (below, Sheldon courtesy photo). The painting is another example of color field abstraction, composed of three vertical color blocks on a large canvas.

“The quote that I really like from Rothko, and this is kind of messing with it a little bit,” Mason said, is “‘I paint large to be intimate.’ And these paintings, we usually look at them from a distance but the reality is that if we actually come up this close where all of our vision is within the painting, they do take on a spiritual level and that was his intention, that in a sense the viewer's as close as he was in making the marks.”

Mason said the strength of the Sheldon’s permanent collection is what drew him to the museum three years ago.

“When I speak with my colleagues who are museum directors throughout the country, everyone knows this collection,” he said. That collection provides a lot of room to create.

“If you have 12,000 objects downstairs, you have a repertory company, if you will. You have all these parts that are laid out. You can choreograph to make a dance performance or as a play,” Mason said.

But unlike other museums who dedicate permanent rooms to their collection, Mason said the Sheldon tends to rotate prominent works, as well as loaning them out. After hearing repeatedly that not enough of the collection is on display, Mason said, “I've been on this trajectory of getting more and more of the objects in the museum at one time and that came to fruition with this show.”

They’ve recently opened up the Sheldon Treasures gallery, which will host a rotating selection of prominent works from the permanent collection during the next few years. That means paintings by artists like Edward Hopper and Georgia O’Keeffe will be up for Nebraskans to enjoy when they have a chance to visit the Sheldon. Both shows will be on display through December 31, 2017.

'I Might Be Your Neighbor': After School Club Empowers Migrant Youth to Tell Their Stories
Voices of a Changing Nebraska: ‘They Don't Understand Us’
Crane Migration Inspires Local Artists