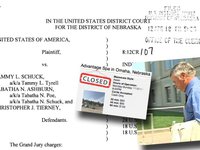 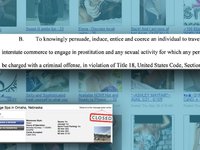 The online ads for escorts, body rubs, and other “adult entertainment” in the Omaha area increased noticeably in the past two days. Law enforcement knows the reason. For several years the College World Series has attracted an alarming number of prostitution rings taking advantage of visitors willing to pay for illegal sex. 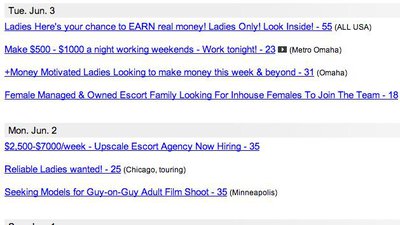 Ads seeking escorts to work in Omaha appear regularly on a variety of internet sites.

As Omaha’s reputation grows as a host to nationally prominent events, so has interest from those involved in the illegal sex trade. Police and organizations battling human trafficking are paying attention as well.

“Unless you are out really looking for it or are attuned to it, you may not realize it’s happening right in front of you,” said Anna Brewer, a special agent with the Omaha office of the Federal Bureau of Investigation.

Brewer leads “Innocence Lost,” a Nebraska-based effort investigating human trafficking cases. The effort combines the resources of several law enforcement agencies in the state. The group compiled plenty of evidence on the darker side of high-profile events like the College World Series, Nebraska football weekends, and the annual Berkshire Hathaway shareholder’s meeting hosted by Warren Buffett.

This year an estimated 35,000 people attended the Berkshire event. Police set up a sting in one west Omaha hotel. Brewer described the near non-stop traffic as being like “a revolving door” ending with 23 arrests in eight hours. Half were prostitutes and half were would-be customers. “I think that’s very significant,” Brewer said.

While local newspaper and television stations reported on the arrests, none reported law enforcement specifically targeted the Berkshire event because police had noticed increasing numbers of online solicitations for adult services in previous years.

What is human trafficking?
Human trafficking is a modern-day form of slavery. It is a crime under federal and international law. It is also a crime in the majority of U.S. states.

Sex trafficking occurs when people are forced or coerced into the commercial sex trade against their will. Sex traffickers frequently target vulnerable people with histories of abuse and then use violence, threats, lies, false promises, debt bondage, or other forms of control and manipulation to keep victims involved in the sex industry. Sex trafficking exists within the broader commercial sex trade, often at much larger rates than most people realize or understand.

--Report of the Governor's Task Force on Human Trafficking, July 9, 2013

There is “a flourishing sex trade in Nebraska” according to a

appointed by Governor Dave Heineman. The 20-member panel wrote it was concerned there was so little data measuring the extent of the problem.

According to the most recent numbers made public by the Nebraska Crime Commission, in 2012 law enforcement in the state made 198 prostitution arrests. That was up from 141 the previous year. Those do not include those charged under federal law.

According to authorities who study the business of human trafficking, when even a small percentage of visitors to these events seek out an escort agency or illegal massage, the pimps in control of the prostitutes know how to separate them from their cash.

“It’s a business model. You want the supply and you want the demand,” said Amy Richardson, the director of the Women’s Center for Advancement in Omaha. The WCA is one of the organizations helping women escape the sex trade in Nebraska.

Richardson says advertising illegal services online made it easy for traveling groups of prostitutes to temporarily locate in a community during major events. Advertising is inexpensive or free. Potential customers away from home “think that other people don’t know what they are doing,” Richardson said, “so men purchase women over the Internet thinking no one will know.”

Law enforcement officials we spoke with would not comment on the potential for targeted enforcement during the 2014 College World Series. Agent Brewer says anytime there is an increase in police activity it gets the attention of prostitution networks.

Because the sex trade has become so mobile, Nebraska authorities benefit from the substantial crime-fighting resources of the federal government. The FBI and U.S. Attorney often develop cases targeting complex organizations which can be prosecuted as criminal conspiracies. Any illegal activity that crosses state borders might justify a federal investigation.

“Let’s say for example one of the girls was brought across the river from Council Bluffs,” said Deb Gilg, U.S. Attorney for the Nebraska District. 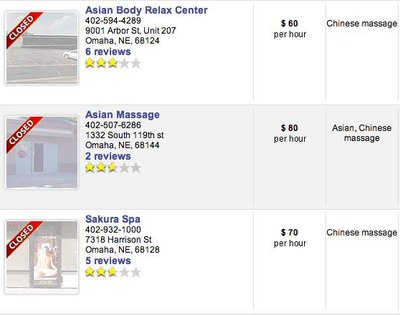 A website featuring customer reviews of massage parlors listed three Omaha spas closed after they were shut down by the human trafficking enforcement task force.

One recent case led to multiple arrests and shut down a group of spas in Omaha. “Those were alleged spas,” Gilg said. “They were operating as a quote spa, but actually they were offering sex acts for sale.”

The owner, William Knox, and four of his employees, including a mother and daughter, all pleaded guilty late last year to charges related to prostitution.

The illegal side of the business was hardly a secret. Within minutes a check by NET News found surprisingly graphic online reviews from satisfied customers posted online months after the Advantage Spa had been shut down by police.

Justifying a full investigation became possible because of a tip from a customer-turned-informant, according to FBI Agent Brewer.

“Those businesses thrived for over 20 years because there was a demand,” she said.

In court documents filed by the U.S. Attorney, investigators claimed while some legal services were provided, most customers paid for sex. Appointments could be set up through a website with a special “members only" section, featuring “provocative” photos of the workers. Customers paid a “door fee” depending on the length of the session and negotiated a separate “tip” with the prostitute.

Richardson says understanding prostitutes might be victims is an important change in the local response to human trafficking. Those seeking her group’s help often say they were coerced to start in the business in their early teens.

By the time young women and men are delivered to social service agencies for help they often have been trapped in the business for five to ten years. They were too fearful to leave.

Richardson describes talking to girls who “think that no one case about them in the world. They have been so isolated; they don’t even need chains or ropes to tie them. Those are in her head.”

Few of the recommendations suggested by the governor’s task force have been implemented, however last year the Legislature agreed minors involved in the sex trade would no longer be jailed as criminals but treated as victims.

Last year one advocacy group, Shared Hope International, gave Nebraska’s response to human trafficking a letter grade of D. The group claims the state treats it as “a minor crime.”

The Task Force ended its report with a bleak assessment. The study concluded “there is an apparent large demand which creates opportunity for large amounts of money to be made.” As for the needed response to the problem, they found even as law enforcement in Nebraska increased its efforts to curb the sex trade, they have “limited abilities to fight this large industry.”