The Nebraska Legislature gave second round approval to the state budget Wednesday night, following a compromise on abortion language that some hailed as statesmanship, and others condemned as a sellout.

Like most proposals, the state budget has to get three votes of approval before being sent to the governor. This year’s budget got the first one two weeks ago, but then got stuck, endangering state funding for everything from foster care to homestead exemptions.

The hangup was language proposed by Gov. Pete Ricketts, denying federal Title X family planning funds to organizations that perform or refer for abortions. Federal law prohibits using the funds for abortion, but opponents argue giving funds to Planned Parenthood, which gets about 270 thousand of the 1.7 million dollars, indirectly supports abortion.

Senators who supported and opposed the governor’s proposal had been negotiating, and Wednesday evening, Speaker of the Legislature Jim Scheer announced a compromise. “We came up with what I believe is a very fair agreement… it has been agreed upon by all those that were working on the subject. It has been reviewed and I have talked to the governor’s office, and the governor’s office has also felt it was a fair and amicable resolution,” Scheer said.

The compromise language contains an exception allowing organizations to refer women for abortions in case of emergency. Both supporters and opponents said that would likely eliminate funding for Planned Parenthood, but allow other organizations, like federally qualified health centers, to continue to receive the money. 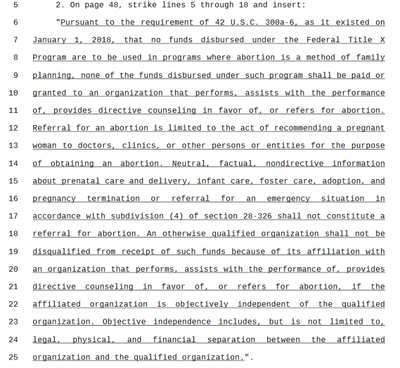 This is the compromise language on abortion

Sen. Mike Hilgers, who supported the governor’s original proposal and negotiated with opponents, praised the compromise:

In: This process put us in a room and did what I believe we should do here in this body: Listen to each other, identify common goals that will help Nebraskans, and work towards that goal. And where we could work together without compromising our principles and beliefs, we did,” Hilgers said.

Sen. Kate Bolz, who opposed Ricketts’ original proposal, also defended the compromise as protecting family planning services for low income people. “I think that this is a compromise that protects our state’s ability to continue to provide essential services through the Title X program, including cancer screenings, preventative health services, and prenatal care,” Bolz said.

Sen. Sara Howard, another negotiator for the governor’s opponents, also defended the result. “We really did our best. And I do think this is reflective of the statesmanship that we want to see in the Unicameral. It’s easy to say ‘no’ on both sides. I don’t expect everybody to like it,” Howard said.

She was right about that. Sen. Adam Morfeld blasted the agreement, which would take effect immediately if the budget is passed, citing the number of patients who receive Title X services from Planned Parenthood. “This is going to put eight to ten thousand patients in a precarious situation the moment the governor signs this into law. There will be eight to ten thousand people in this state that will lose services immediately,” Morfeld said.

But Sen. Matt Williams, who supported the budget with the governor’s language, hailed the result. “I am pleased personally with the big picture of the budget that’s come out. The budget as presented that we’re adopting protects K-12 education. It protects Corrections. It limits the cuts to our agencies to two percent, and the cuts to higher education at one percent (next fiscal year). I believe that’s a budget we can live with,” Williams said. 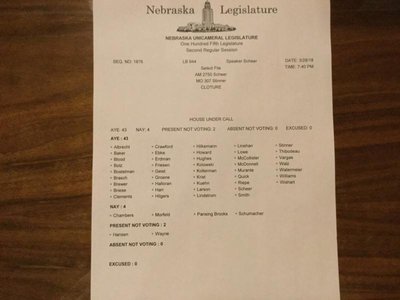 After about two hours, senators voted 43-4 to cut off debate, then voted 44-4 to give the budget second round approval.