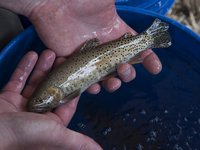 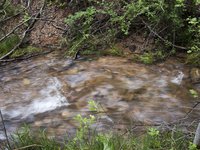 Colorado’s mountain streams are premier trout fishing destinations. But anglers aren’t likely to reel in a greenback cutthroat trout. That’s because until a few years ago, Colorado’s state fish was on the brink of extinction.

Bear Creek is a rugged sliver of rushing water in the mountains a few miles outside Colorado Springs. On an early June morning, biologist Josh Nehring wades up the narrow, wooded stream, guiding a long, yellow wand through the water ahead of him. He wears a big, plastic, beeping backpack.

“Last time we pretty much just focused on the pools, there wasn’t much sitting in these faster areas. But it’s just running so high this year,” Nehring said. Recent rain and snowmelt have the stream running many times above normal.

Nehring is electrofishing: sending a current through the water to attract and stun the fish, making them easier to catch. Nehring hopes to find a few trout here to help establish many more elsewhere. A coworker follows him with a net.

“Oh, saw one over here, where’d he go…he either went up or…there he is, nice job. You got him, you got him! Perfect. Just hold him in the water for a second,” Nehring said.

It’s spawning season. After pulling the fish from the net, Nehring determines its sex and whether it’s carrying eggs or sperm, called milt. Those that do are termed “ripe.” They get lucky with the first one, a ripe male. 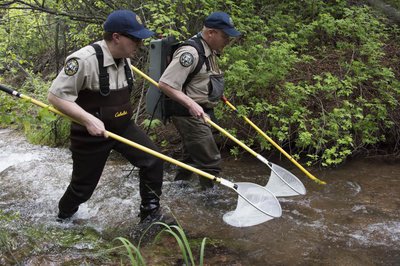 Nehring and his coworkers continue moving upstream, catching trout. Many are too young or too small. But the “ripe” ones get put in a bucket.

After an hour and a half, they’ve collected six males—better than last week. Nehring, who works for Colorado Parks and Wildlife, is pleased with the catch, because these are special fish: greenback cutthroat trout.

“It's the last remaining genetically pure greenback cutthroat strain that we have in the wild,” Nehring said.

Colorado Parks and Wildlife is one of several state and federal agencies that has been working for decades to recover the greenback cutthroat trout--once thought extinct and now federally listed as a threatened species. But a few years ago, new genetic research revealed that they’d been saving the wrong subspecies. Greenbacks are just one kind of Colorado’s native trout.

Researchers had spent years recovering a different cutthroat subspecies, likely one native to the Colorado River Basin. After comparing modern trout DNA with historic specimens collected by early explorers, researchers determined the fish swimming in Bear Creek were the only genetically pure greenback cutthroat trout left in the wild.

And so for the last several Junes, Nehring and others have collected milt from the fish spawning at Bear Creek to help rebuild the species. 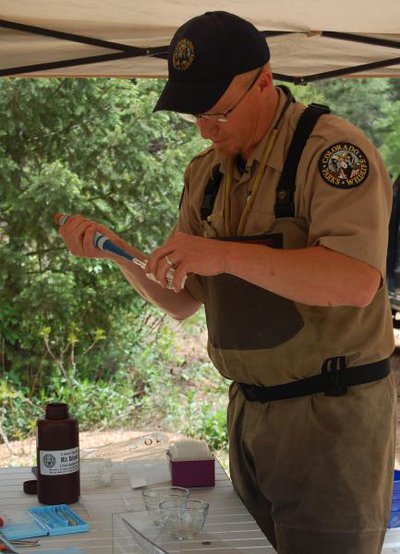 After collecting milt from the greenback cutthroat trout at Bear Creek, Josh Nehring loads it into a vial along with a special preservation liquid to help keep it viable during the trip to Leadville.

“If there's only one stream in the world that has these fish, they're pretty important,” Nehring said.

Back on the road, under a pop-up tent near the river, Nehring and his staff lay out an arsenal of tools, vials and coolers. Nehring explains milt is water-activated. Without any eggs around to fertilize, it’s essential to keep it dry for now.

After drying it with a paper towel, he gently squeezes each fish over a glass dish to collect a drop or two of milky fluid. The first fish produces two drops of milt.

“Surprisingly, that is a fairly good male,” Nehring said.

After Nehring collects milt, length measurements and fin clips from each fish (for genetic research), the vials go into a cooler then sent straight to the Leadville National Fish Hatchery.

These fish are resilient. But in much of Colorado, cutthroat trout have suffered from habitat loss and competition from introduced, nonnative fish species like rainbow and brown trout. So researchers still take great care to minimize their disturbance at Bear Creek as they work to save this fish.

“They're an important part of the ecosystem,” Nehring said. “They've evolved here over a long period of time and fill a niche in the environment.”

The next morning, two hours to the west, the Leadville National Fish Hatchery buzzes with activity. Several fish biologists prepare for the day’s work: to fertilize hatchery-raised eggs with the wild milt collected at Bear Creek, as well as milt from hatchery fish. In 2008, biologists collected an initial batch of greenbacks from Bear Creek to spawn in hatcheries in Salida and Leadville. 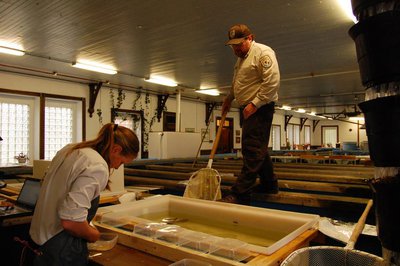 “This is a very hard-to-raise subspecies of cutthroat trout,” Ed Stege said, manager of the Leadville hatchery and long-time employee of the U.S. Fish and Wildlife Service. “And so it has been difficult to keep alive in captivity.”

Even with established populations at both hatcheries, Stege said the wild Bear Creek milt is critical to increase genetic diversity and hatch rates.

“The biggest challenges for the greenback cutthroat going forward, I think, is going to be the genetic diversity. You know being that there was only one population remaining....that's all the genetics we have to work with,” Stege said. Researchers plan to begin a project to further increase genetic diversity this fall.

Greenback cutthroat trout are actually native to the South Platte River Basin, further north. Biologists think homesteaders likely introduced greenbacks to the formerly empty streams in the Bear Creek area more than a century ago. That may have saved the species.

Now, because of the efforts of Colorado Parks and Wildlife, the U.S. Fish and Wildlife Service and others, Bear Creek is no longer the only place greenback cutthroat trout can be found in the wild. The first reintroduction of genetically pure greenback cutthroat trout took place last summer at Zimmerman Lake. This is the ultimate goal of the recovery program: to reestablish new wild populations in the species’ historic range--the South Platte River Basin. 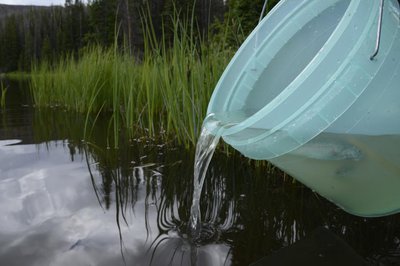 “I'm not going to say we're successful until we've produced enough progeny out there and they've reclaimed enough streams to where we have a lot of self-sustaining viable populations out there,” Stege said.

The Zimmerman Lake population is a wild brood stock where biologists can continue growing more greenback cutthroat trout. State agencies are working on removing non-native fish from a few other streams to provide additional places to reestablish the fish, Stege said.

“We have no idea how they might contribute to the overall welfare of the ecology or even humankind. But if we don't save the parts now, there won't be anything down the road for future generations to enjoy or to even witness,” Stege said.

Other threats to the fish still remain: increased sediment and habitat loss from forest fires, warming waters from climate change, disease and hybridization with other fish. But in time more anglers might find native greenback cutthroat trout back in the South Platte Basin.