If you’re looking for some good legal advice, you may have to look a little harder if you live in the country. Attorneys are getting harder to come by in rural areas, but Nebraska is trying to recruit more lawyers back to small towns.

Over the last decade or more, fewer young attorneys have chosen to set up shop in small towns and take over for retiring professionals. Just like the shortages of doctors, nurses, dentists, even farmers to some extent, rural areas are seeing a shortage of young lawyers.

Koenig has helped develop the Rural Law Opportunities Program (RLOP), a new effort to recruit country lawyers. Each year, 15 scholarships will be available to high-school graduates to attend college at Chadron State College, Wayne State College, or the University of Nebraska at Kearney. If they keep their grade point average at 3.5 or higher, and score well enough on the entrance exam, the students will be guaranteed acceptance to the University of Nebraska-Lincoln College of Law. 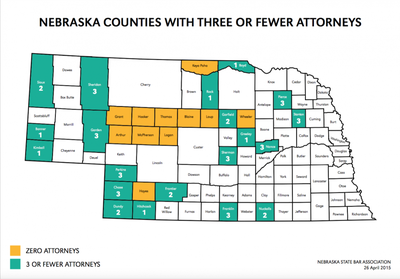 Koenig says Wayne State is recruiting current students to fill its scholarship slots right away. The other schools will start bringing students on scholarship next fall.

RLOP is modeled after the Rural Health Opportunities Program, which makes a similar offer to recruit rural students to become small-town doctors. Koenig thinks the lesson there will also apply to the law.

“If you start with kids that come from the country in the first place, there is a very good chance they will come back to the country to practice law,” Koenig said.

Pruitt surveyed law students in Arkansas and found a divide among those from rural areas. Some were bound and determined to leave their rural roots behind. “But the flip side of that particularly with rural students was this was their calling,” Pruitt said. “They wanted to go back and serve their community.”

Those are the kinds of students that may respond to the perks offered in Nebraska’s RLOP.

Pruitt has heard about rural lawyer shortages in states like Maine, Georgia, Iowa, Montana, and Alaska. The stories suggest a widespread problem, although she says good data is somewhat scarce. Data collection is inconsistent from state to state.

In places where there is a documented shortage, Pruitt says it is an important problem to solve because it puts residents at a legal disadvantage.

“Especially if the other side is the federal government, the state government, or a corporate interest, or, you know, even a local school board,” Pruitt said.

Institutions like that are going to have a lawyer. Hiring an attorney to an area running low on legal experts likely means paying someone to drive in.

District Judge Derek Weimer covers a five-county area of western Nebraska where he says some counties only have one lawyer, the same person who is the county prosecutor. When the court needs a public defender, it has to pay for a hundred miles or more of “windshield time,” that is, time spent on the road not in court. 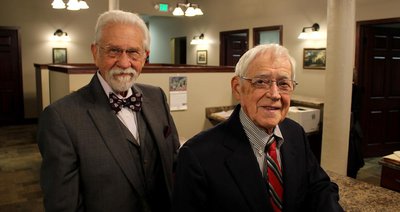 States are searching for solutions. In addition to the new scholarship program, Nebraska offers summer internships to match law students with rural firms. So does Iowa, North Dakota and some other states. South Dakota offers a stipend to lawyers who will work in underserved areas.

Without making a stronger effort, there is a concern that young lawyers will be less likely to replace experienced legal professionals who have been serving some rural communities for decades.

Robert Moodie is probably the most experienced attorney in Cuming County, in northeast Nebraska. Moodie, who will turn 90 years-old next year, is still on the job doing real estate and inheritance law. He works out of a storefront office in the farming town of West Point. Standing on the cobblestone Main Street the smell of nearby cattle feedlots perfumes the air.

Moodie’s family has been practicing law in West Point since 1886. Part of what keeps him on the job is that connection to the town and the time he has spent working with schools, churches, and community groups.

“I wouldn’t think of going to Lincoln or Omaha to practice law,” Moodie said. “I think a small town is the place to be, to be part of the community.”

That’s the same kind of connection that drew Tyler Pribbeno back to his hometown of Imperial in southwest Nebraska. Pribbeno, 31, returned after law school to be close to home, and because he didn’t’ want to be pigeonholed into a specialty like he might have been at a larger city firm.

“I wanted to do a little bit of everything, and I guess I didn’t want to be married to the job as soon as I got done with a rigorous law school program,” Pribbeno said.

Life is slower in a small town, Pribbeno says. Slower than many may like. For starters, there aren’t many restaurants or movie theaters to choose from.

“You just make your trips elsewhere, but once you get used to not being able to go to the grocery store for milk at midnight, you get accustomed to it,” Pribbeno said.

One thing Pribbeno says he has been able to find is plenty of legal work. To fill the lawyer shortage in Nebraska, more rural students will need to see the same opportunity.