Ricketts: Vaccines Next Week if Approved; Fewer Doses Than Anticipated This Year

Gov. Pete Ricketts said Nebraska is getting ready to distribute vaccines against COVID-19 next week, if the Food and Drug Administration approves. But he said it looks like fewer doses than originally anticipated will be available this year.

With the FDA scheduled to review the Pfizer vaccine Thursday, Ricketts said if it’s approved for emergency use, the state expects to receive the first shipments sometime next week. Initially, it will go to eight hospitals that have the ability to store it in ultra-cold freezers, down to about minus 90 degrees Fahrenheit. Ricketts said he was not disclosing where those hospitals are, out of security concerns. And he said if the FDA then approves the Moderna vaccine, due to be considered next Thursday, that will be distributed to other areas of the state because that vaccine does not need to be kept as cold.

The governor listed who would be first in line to be vaccinated, including hospital workers, long term care workers, emergency medical services personnel – “those are folks who may be interfacing with people who are coronavirus positive,” and then long term care residents. 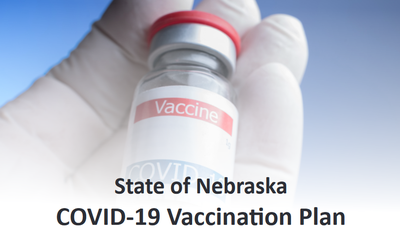 Ricketts stressed that not everyone who works in those institutions will get first priority, using hospitals as an example.

“We’re talking not about everybody in the hospital system. We’re talking about people who are going to be prioritized who deal with potential coronavirus patients. So, for example, a nurse working in an emergency room, whereas somebody who maybe just works in the office is not going to be a part of that group to get the vaccine,” Ricketts said.

The governor said the vaccine would be slower in arriving than originally anticipated. Originally, officials thought they would be getting about 100,000 doses by the end of the year. Now, they’re expecting about 15,600 next week, but then a 2-3 week period where they won’t get any more of the Pfizer vaccine.

That will slow down the start of vaccinations in long-term care facilities, which serve about 55,000 people. Ricketts said there have to be doses on hand for half of them before vaccinations can start.

The vaccine requires two doses, three weeks apart. Citing Dr. William Gruber of Pfizer, Ricketts said the vaccine is about 52 percent effective after the first dose, with the second one bringing that up to 95 percent.

After health care workers and long term care staff and residents, the state’s plan gives priority to first responders and people working in education, food and agriculture, utilities and transportation, followed by those over 65, vulnerable populations including disabled and homeless people, and those living in congregate settings like prisons or universities.