Gov. Pete Ricketts promoted his proposed constitutional amendment to limit property taxes. And a proposal to bar the use of eminent domain for privately-owned renewable energy projects fell short of the votes it needed.

Ricketts said the Legislature has tried to address property tax problems by limiting levies or valuations. But he said his proposal was a needed addition. “You can only have sustainable tax relief if you control how fast those taxes are going up. And at the end of the day, property tax payers do not pay taxes in levy lids or valuations, they pay in dollars. And that’s what LR8CA does – it addresses the dollars,” he said.

Among those supporting the proposal was Lincoln City Councilman Roy Christensen, who said he was testifying in a personal capacity. Christensen noted the proposal would allow local governments to collect more than a three percent property tax increase, but only with voter approval.

“People in the property tax relief conversation often say ‘Taxpayers should show up to budget meetings if they really care about getting relief.’ For most Nebraskans, they don’t have the time to show up to the numerous budget meetings for their school, city, county, and so forth,” he said. “With LR8CA, the people can vote to override the 3 percent cap if they believe local government needs additional resources.”

Among those opposing the proposal was Douglas Kindig, the mayor of LaVista who was also representing the United Cities of Sarpy County, including Bellevue, Gretna, Papillion and Springfield. Kindig called the amendment a “one-size-fits-all” proposal that would harm fast-growing communities like those in Sarpy County.

“The growth that we are experiencing is not only good for our communities, but also the state, attracting businesses such as Paypal, Securities America, Facebook, (and) Nebraska Crossing, to just name a few. This has been done and (made) possible through our investment in public infrastructure. The inability to capture the increase in valuation created through new construction and/or annexation prevents us from realizing a return on our prior investment,” he said.

Also speaking against the proposal was Jack Moles, representing the Nebraska Rural Community Schools Association, the Nebraska Council of School Administrators, and the Nebraska State Education Association. “There are many costs to a school district that are not totally in the district’s control. Examples of this would be certificated staff salaries, the rising costs of health insurance, and the meeting of demands of state and federal regulation,” Moles said.

The committee took no immediate action on the proposal. If the Legislature did approve the proposed tax cap, it would then go before voters in the Fall of 2020.

And in debate by the full Legislature Wednesday, senators considered a bill by Sen. Tom Brewer of Gordon to prohibit using eminent domain to build transmission lines for privately-owned renewable power generating facilities, like wind farms. 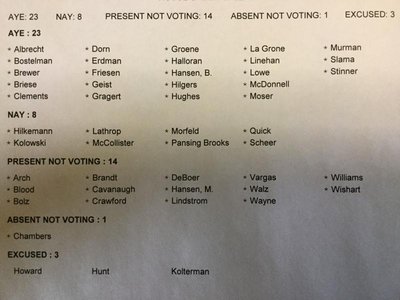 This was the vote on Sen. Brewer's bill.

The issue stems from controversy in Brewer’s Sandhills district, where residents are split between those who view wind farms as a potential source of income, and those who see them as an eyesore and threat to the landscape.

Brewer sketched a scenario in which a wind developer pays a rancher to put turbines on his land, but the rancher can’t get his neighbor to allow a transmission line to carry power from the turbines. “I ask NPPD to build my feeder line and use their power of eminent domain against my neighbor on my behalf. Private companies should not have the power normally reserved only for government to use against their neighbor so they can make money,” he said.

As many western Nebraska wind power opponents watched from the balcony, Sen. Mike Groene of North Platte touched on one of their big objections to wind turbines. “I go home every weekend since I’ve been here. Why? Because I love western Nebraska. I love the vistas. I love the sunshine. I love the green grass in the spring, when it ever gets here again, on those grasslands on the Sandhills. Don’t come out of Omaha and Lincoln and tell me I’ve got to look at them damn things! Alright? Quit doing things for us. Leave us alone,” Groene said.

Sen. Rick Kolowski of Omaha opposed the bill, and touted the benefits of wind power. “Over the past decade, private renewable electricity generation companies have made investments of over $3 billion in projects in Nebraska. These investments have resulted in thousands of jobs during the construction and operation phases of these projects, alongside hundreds of millions of dollars of spending and economic development flowing into the local communities where the projects are located,” he said.

And Sen. Dan Hughes said the state shouldn’t get involved in a local issue. “This is a local issue. This is a zoning issue in Cherry County. They have zoning. We as state government don’t need to do the heavy-handed stuff of stepping in and taking away local control,” he said.

When it came time to vote, 23 senators voted for Brewer’s bill – two fewer than it needed to advance. Eight senators were opposed, and another 14 were present but not voting, which has the same effect as a ‘no’ vote in keeping a bill from getting majority approval.