Faced with record hospitalizations for COVID-19, Gov. Pete Ricketts on Monday announced a further notching up of health restrictions. And he deferred calling Joe Biden the president-elect, saying people need to let legal challenges play out.

Gov. Ricketts pointed out on September 23, Nebraska hospitals had about 200 people with COVID-19. Today, it’s close to 800. To try and stop that trend, the governor announced a further tightening of health measures. Effective Wednesday, people will be required to wear masks in all indoor businesses where they will be within 6 feet of other people for more than 15 minutes. Attendance at indoor extracurricular activities for youth, like sports events, will be limited to family members only. Indoor gatherings will be limited to 25 percent of the site’s capacity. There will be other restrictions as well (shown at right). 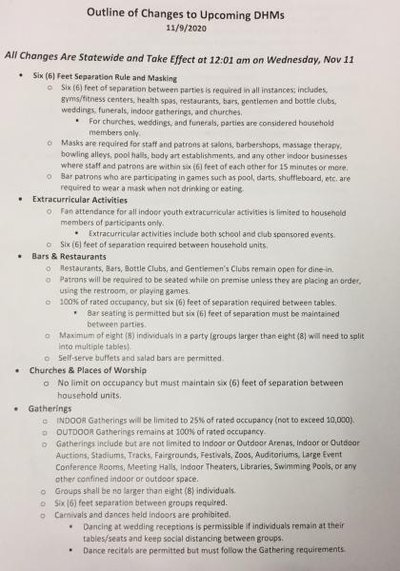 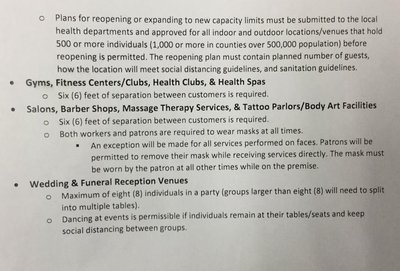 The new restrictions are currently scheduled to expire Nov. 30.

At his news conference, the governor also introduced a COVID-19 survivor, Kurth Brashear of Seward, who talked about his experience with the disease. Brashear said he was diagnosed with COVID after letting his guard down and inviting several families over to his house, where he was exposed. He said he then suffered shortness of breath, a fever, and low oxygen levels that sent him to the hospital where he was told he had lung damage. And he said he’s still suffering other effects.

“Too much public discussion in my view is focused on – and regrettably and understandably, tragically -- the two percent in our nation who have died from COVID. And each one of those is indeed a tragedy. But I think it creates the impression that the other 98 percent are fine – we use the term ‘recovered.’ Well, if ‘recovered’ means lung damage that we all hope will heal itself and lingering back pain, I’m not sure that that’s my definition of recovered,” Brashear said.

Brashear urged people not to let down their guard, and to wear masks. However, Ricketts repeated he would not impose a mask mandate on the state, saying it would provoke resistance. He was also asked about comments by his spokesman, Taylor Gage, who responded to comments on Twitter by several doctors urging tougher restrictions, by pointing out those doctors had favored Joe Biden in the election.

“Twitter is a place where people put their ideas out there and those ideas are challenged and that’s just a part of the social forum that we have with regard to that. So everybody’s entitled to be able to have their different opinions and that’s the forum that we have there with Twitter. It’s a place of exchanging ideas,” Ricketts said.

Ricketts was asked if that means it’s fair game when people tweet that he’s resisting a mask mandate because he supports President Trump. The governor said he’s just trying to strike a balance between preserving people’s freedoms and maintaining hospital capacity.

“I will tell you the President has – President Trump has never called me and told me I had to do one thing or another. We’ve sat on phone calls with the White House staff, listened to their advice, we’ve listened to the advice of other doctors and epidemiologists around the state and the country and we take all that into consideration as we’re making the decisions with regard to how we do our dhms,” he said.

Dhm’s are “directed health measures” – health restrictions like mask requirements. Ricketts was asked if his policy would change under a new presidential administration.

“If president-elect Biden is indeed confirmed to be the next president and he approaches me about a mask mandate, I would not be going along with a mask mandate. I’d be keeping the same policy,” Ricketts said.

Asked if Nebraska cities could enact mask mandates on their own, Ricketts was noncommittal.

“Different municipalities will have to go check their own rules and bylaws and consult with the local public health departments or somebody with regard to what their actual authority is. We know for sure Omaha has (authority); we know Lincoln does because of a separate carve-out in state law. But the home rule charter for Omaha allows them to be able to pass that ordinance. Other cities may be able to do that too,” he said.

“I think it’s important to understand that media outlets do not elect a president. It’s done in the states and certified by the secretaries of state in those different states. There’s lawsuits outstanding about this. There’s probably going to be recounts. So, (I) just encourage people to remember that as we’re going through this process and so we have to let the legal process work its way out with regard to this election,” he said.