Governor Pete Ricketts announced Wednesday he is calling up members of the National Guard to help with the state’s program to vaccinate people against COVID-19.

Ricketts said he’s calling up 17 members of the National Guard to help contact companies who have workers who can be vaccinated in the second phase of the program. The first phase, “1a” includes health care and emergency medical workers, along with long term care facility staff and residents. The second phase, “1b” expected to begin in January, will include first responders and workers in food and agriculture, utilities, and transportation. Ricketts gave an example of how that National Guard personnel would be used.

“We’re going to be calling, talking to businesses. I’ll give you an example: For a trucking company, we really want to focus on the truck drivers and the mechanics to keep the trucks rolling. So again, office staff wouldn’t be in that category of (people) prioritized to get the vaccine. So if you are a trucking company and somebody from the National Guard calls you and says ‘Hey, we’re just calling to see how many truck drivers and mechanics you have,’ please respond back. That helps us get an idea of how many people will be in those categories as we do our planning for Phase 1B,” Ricketts said.

Ricketts said prison employees will also be included that phase. So far, 409 staff members have tested positive for COVID-19, according to the Department of Correctional Services. Meanwhile the department reported as of last Friday, 786 inmates had tested positive, with six deaths. Under the state’s plan, inmates will be vaccinated in the third phase, “1C.” Ricketts said he did not know when that would begin. But under the state’s plan, it will be before the phase that includes the general population, which Ricketts has said he expects will be in April. Asked why prison staffers would be vaccinated before prisoners, Ricketts’ spokesman Taylor Gage said staff could bring the virus into the prisons from the community, and this was a way to cut off that pathway. 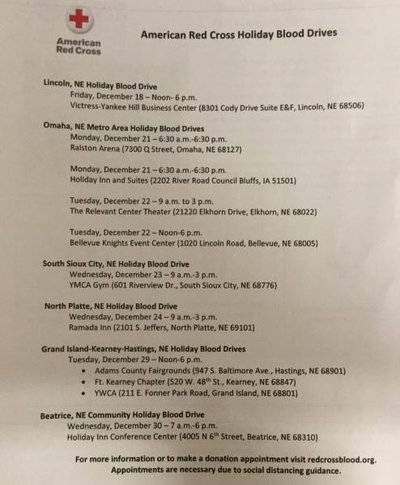 Also at Wednesday’s news conference, Waysun Dun of the American Red Cross asked people to consider donating blood. Dun said the holidays are always a difficult time for donations, and the pandemic has made things worse.

“While the pandemic has not diminished the need for donated blood, it has unfortunately caused the cancellation of many blood drives,” Dun said.