Gov. Pete Ricketts announced Monday health restrictions will be loosened, football will be allowed, and he expects schools to reopen with students in them in the fall.

The loosened, so-called "Phase 3" restrictions take effect next Monday, June 22, and apply to almost all of the state, with the exception of Hall, Merrick, Hamilton and Dakota Counties, which are in health districts that have been especially hard hit by the coronavirus.

For the rest of the state, bars and restaurants, which had been limited to 50 percent of capacity, will be allowed to operate at full capacity. Group size limits per table will be increased from six to eight. 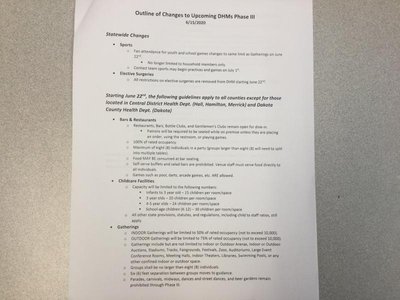 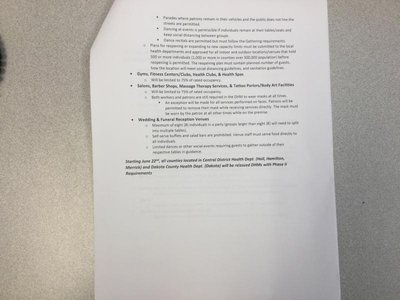 Restrictions on people visiting loved ones in nursing homes and other long-term care facilities will also begin to relax. Felicia Quintana-Zinn of the Nebraska Department of Health and Human Services said it’s a balancing act between protecting residents from the coronavirus and preserving their quality of life.

“We really try and make sure that they’re (subject to) limited exposure, and try and help protect them as much as possible. But we understand at the same time that, yes the virus is important and protecting them from that, but also it's equally important to consider their quality of life, and the dignity of the residents that are in these facilities, and taking all that into account when it's time to begin relaxing restrictions,” Quintana-Zinn said.

Until now, state guidance urged limiting visitors to so-called “compassionate care” situations, usually when someone was dying. Now, they will be allowed if all of the staff have been tested for COVID-19. Once again, that relaxation does not apply to Hall, Merrick, Hamilton and Dakota counties.

Dr. Gary Anthone, the state’s chief medical officer, said Monday 131 long-term care facilities have seen cases of COVID-19, affecting 560 residents and 451 staff, with 99 deaths. That’s a little under half of the total 216 deaths in the state attributed to COVID-19. Anthone said Another 15 of those deaths have been connected to meatpacking plants, which have accounted for 4,071 cases.

In another change, contact sports, including football practices and games, will be allowed starting July 1.

Restrictions on gatherings will also be relaxed in most of the state beginning Monday. Currently, they are limited to 25 people or 25% of capacity for indoor or outdoor arenas and other places, with a maximum of 3,000 people. Starting next Monday, the limit on the number of people per gathering will be gone, and venues will be able to admit up to 50 percent of their capacity, up to 10,000 people, so long as local health department approve the plans. Ricketts pointed to those qualifications when asked if this meant a return to a full Memorial Stadium.

“This is not actually a green light for a full football stadium at Memorial Stadium yet. You know, we all hope we can get to a football season. But this is not it right now,” Ricketts said.

Restrictions will also be relaxed to so-called "Phase 2" restrictions in Hall, Hamilton, Merrick and Dakota Counties, but there, they will move from their existing restrictions, which are tighter than the rest of the state, to the restrictions that are now being loosened elsewhere. So, for example, limits on gatherings will go from 10 people to 25 people in those counties next Monday.

And officials gave their clearest indication yet that they expect K-12 schools, which moved from in-person to virtual teaching in March, to reopen for students in the fall. Education Commissioner Matt Blomstedt said that reopening has moved from a hope to an expectation. He said the state would work with individual districts on how to reopen. Ricketts expressed confidence.

“Safe to say it’s not going to look like it did a year ago. We are expecting our schools be able to figure out how to make this happen. But I’ve got to tell you, based upon the leadership we have in our schools and the way that they responded so quickly to the beginning of this pandemic, I’m confident that the commissioner and his team working together with our superintendents will be able to figure this all out and have kids back in the classroom,” he said.