Today Governor Pete Ricketts honored people who rescued others during flooding earlier this year. The event was held in the capitol rotunda, and brought people from all over the state. The governor says flood response demonstrated the great spirit of Nebraska.

“This ceremony is about recognizing the people who stepped up during the terrible disaster that we had earlier this year,” Ricketts said.

The ceremony honored many people who took action during flooding, including volunteer firefighters and National Guard members who risked their lives to rescue those trapped by flood waters.

The event also honored an individual who died in Columbus while trying to rescue a neighbor in March. 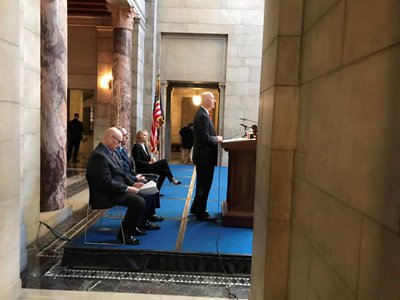 “Our first hero that we’re gonna recognize here today is a man who gave his life trying to save a neighbor," Ricketts said. "On March 14th James Wilke received a phone call. It was the fire department. There was a motorist who was stranded in the flood waters.”

Wilke had to cross a bridge that had been undermined by flooding, and he died when his tractor was swept away. Wilke’s family attended the ceremony to receive a medal from the governor in Wilke’s honor.

Ricketts says during flooding, he and First Lady Shore traveled the state.

“What we saw was that great spirit of Nebraska," Ricketts said. "That resilience, that grit, that determination. People stepping up, people who were volunteering to put themselves in danger to help someone else they may not have even known. This was Nebraska’s finest hour.”

Honorees at the ceremony were chosen from hundreds of nominations. The governor and first lady plan to find other ways to honor those who took action during flooding over the course of the next year.