Ricketts: Focus on Smooth Transition to Biden, Not Ousting Trump

Governor Pete Ricketts said today Friday people should focus on ensuring a smooth transition for President-elect Joe Biden, rather than forcing President Donald Trump out of office. And lawmakers continue to introduce new proposals in the Legislature, on subjects ranging from guns to taxes.

Once again Friday, there was discussion in the Legislature in the aftermath of Wednesday’s riot by Trump supporters in the U.S. Capitol. This time it was Sen. Machaela Cavanaugh who commented.

“The president of the United States attempted to stage a coup and withhold military support. And he should be removed from office immediately, and Vice President Mike Pence should serve out the remainder of that term,” Cavanaugh said.

Investigations are underway about the delay in having National Guard troops reinforce Capitol police. CNN reported Pence, not Trump, facilitated their eventual deployment; the Washington Post reported the military was hesitant to have soldiers be seen in the Capitol confronting protestors. Gov. Pete Ricketts, asked about Trump’s responsibility for the riot, declined to blame the president.

“I think the President called for people to protest. All those protestors who behaved violently, that was their individual volition to do that. Any time that happens – when it happens last summer, when people behaved violently, and broke windows and stuff -- that was on their individual volition. Every protestor has the responsibility to remain peaceful,” Ricketts said.

And Ricketts rejected calls for the president to resign or be removed from office.

“I don’t think it serves anybody to have the president resign or to be removed from office. We have to focus on a smooth transition to the Biden administration. That’s what the president is committed to,” he said.

Also at his news conference, Ricketts praised the state’s Test Nebraska program for COVID-19, saying unlike in some other states that require a doctor’s note to be tested, people can simply sign up at testnebraska.com.

As part of a $27 million contract, the state originally got supplies for 540,000 tests. Since then, Ricketts said, Nebraska has purchased another 660,000. At a cost of $32.50 per test, that has added just over $21 million to the cost, money Ricketts said could be supplied from the second round of COVID relief recently passed by Congress.

The governor also noted the number of people hospitalized for COVID-19 has continued to decline, and is now below 500, after peaking at nearly 1,000. But he said people need to remain vigilant, repeating familiar advice about maintaining social distance, washing hands frequently, and wearing a mask at stores or in close quarters. And, as he frequently does, Ricketts asked people “Please stay home when you’re sick. That’s going to be important to slowing down the spread of the virus.”

Ricketts was asked, since many people have jobs that don’t offer paid sick leave, whether he has changed his position against legislative proposals to require businesses above a certain size to offer it.

“The answer is no. This is something that employers can work out with the people that work there. I would say that there’s a lot of employers that do offer that paid time off. Here at the state of Nebraska we’ve made accommodations with regard to that and when you have circumstances like this, when you’ve got a pandemic, it’s going to be different than your normal, everyday people going to work, people getting sick kind of thing,” he said.

According to state personnel director Kevin Workman, even though federally mandated leave provisions that applied to the state and certain private businesses expired at the end of last year, Nebraska is offering up to 80 hours of additional sick leave to state employees who need to isolate or quarantine, or have COVID-19 symptoms.

Proposals in the Nebraska Legislature to require private business to provide paid leave have repeatedly been introduced and failed in recent years. 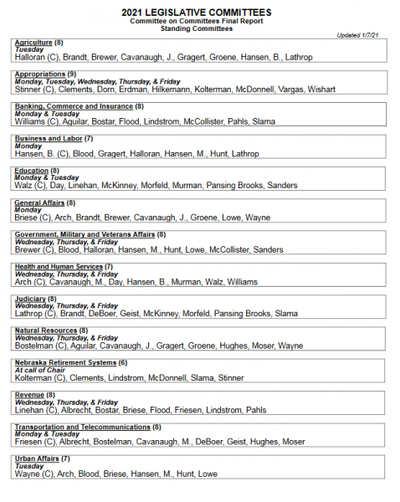 Here's a finalized list of the chairs and members of standing committees.

One, by Sen. Steve Halloran, would prohibit state and local officials from enforcing federal gun restrictions that are not part of state law.

Another, by Sen. Tony Vargas, would bar government agencies from using facial recognition software, which the bill says is often inaccurate when used on women, young people, and people of color.

Another proposal, by Sen. Tom Brewer, would ask people to vote on limiting property taxes to one-third of the cost of schools. Those taxes currently account for around half of all school funding.

Bill introductions will continue all next week, and Speaker Mike Hilgers said he’ll announce early in the week how he proposes to handle future filibusters.