“We might in fact create a bit of a disaster, perhaps, when you think about over 40,000 students and thousands of staff members all getting together in an environment,” Bennett said.

Lincoln Public Schools Superintendent Steve Joel has said he thinks schools can reopen safely, but students will have the option of remote learning.

“If you’re somebody who’s older with underlying health care conditions, just like in any other employer, you ought to be making accommodations for that person to be able to, say, do remote teaching,” he said.

“Schools and teachers are now probably beginning more detailed conversations and I think in Lincoln and otherwise there’s been a lot of work going on. Now it’s really this phase of engaging teachers in those very conversations – what do you need, what otherwise do you need as we kind of build this plan out to a classroom level?” Blomstedt said.

Blomstedt explained how new guidance from the state Department of Education recommends schools react to changing levels of health risk. 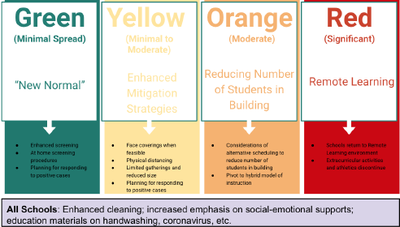 To see the complete guidance from the Department of Education, click here

(Although the pages are marked "final draft," department spokesman David Jespersen says this is the final version)

“If you’re in the green, largely you’re in a good position to be able to run schools in a full capacity perspective. We believe if you’re essentially in the yellow, you’re able to run schools in a capacity but one should be cautious, right? Make sure that you have all of the appropriate PPE (personal protective equipment) and that there’s an opportunity to maintain social distancing. As you approach an orange we start having to have concerns whether or not you can be at full capacity. And red is essentially that you’re back to a position where you should be remote learning completely,” he said.

The guidance, issue Friday, says students and teachers won’t have to wear masks, but notes that the Centers for Disease control recommends them. Lincoln has said it will require masks. Blomstedt said there’s a practical advantage to wearing masks, using the example of whether other students would have to quarantine if one tests positive for COVID-19.

“If all the students are wearing mask in a classroom, that’s less likely to be counted as a close contact than it would be if none of the students were. And so part of the dynamics of masks is it’s actually a strategy to be able to return to school quicker,” he said.

Ricketts was asked about criticism of allowing school sports at a time when some teams are reporting infection spreading.

“We’ve got to manage the risk, mitigate where we can, but also start returning to a more normal life. And I think sports are an important part of the school experience,” he said.

And the governor had a special plea for parents.

“We know that parents are going to have a lot of concerns and they are going to have a lot of opinions about how schools are reopening. What I’d ask is for parents to be patient, be gracious, work with your school boards, with your teachers, with your principals, with your superintendents. This is a pandemic that we have not experienced in our country in over a century. We’re all learning our way through this. And as we look about bringing kids back into the classroom, it really is going to be almost a building-by-building decision,” he said.

Blomstedt says he knows of no schools in the state that have decided not to reopen with students present.

Above are some highlights from what the governor said this morning.