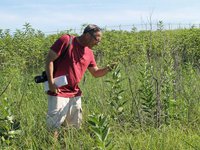 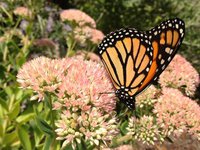 The population of monarch butterflies has declined so dramatically in recent years that the iconic insect is being considered for the U.S. Fish and Wildlife Service’s endangered species list. Efforts are underway to determine the scope of the decline in Nebraska, a stop on the monarch migration route.

Carrying notebook and camera, Tom Weissling wades through waist-high grass and plants at Nine Mile Prairie west of Lincoln. The associate professor in the University of Nebraska-Lincoln’s Department of Entomology periodically stops, looks closely at plants, and takes notes and pictures. It’s how he spent a lot of his summer, combing the state for signs of something that’s getting harder to find. Monarch butterflies. 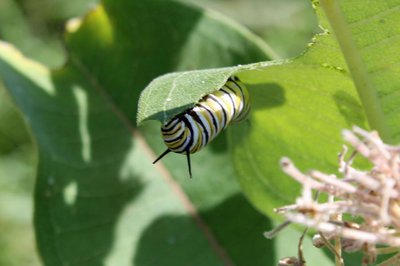 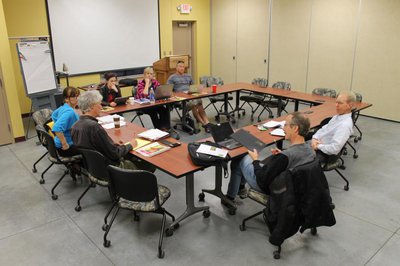 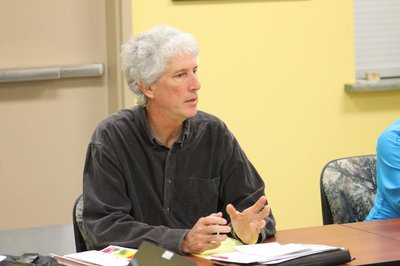 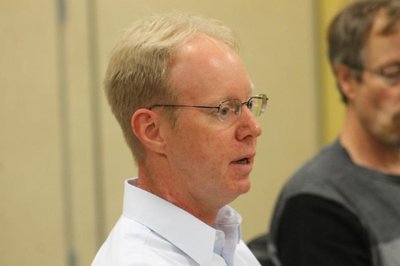 “Mostly I’m trying to find Monarch larvae. In my last trip I looked at several hundred plants and I only found about four larvae,” Weissling said while walking through the field. (CLICK HERE to watch a video story on Weissling's survey)

He’s also looking for milkweed. The connection is important because monarchs lay their eggs exclusively on milkweed, and it’s the only thing the larvae will eat. Weissling’s rough survey took him to about two thirds of Nebraska’s counties, and is something of a starting point in determining the decline of monarchs in Nebraska.

Why this is happening can be controversial. Some say milkweed loss is caused by increased use of agricultural herbicides. Some in agriculture say the monarch decline is also caused by a loss of forestland in Mexico where monarchs winter, and temperature fluctuations.

Regardless of the cause, Hovorka said these are big changes that require a big response.

Gathered in a Lincoln meeting room earlier this fall were a half dozen people starting to talk about that response. Researchers, representatives from different organizations, all with an interest in reviving monarch populations in Nebraska. Ongoing meetings Hovorka says could lead to a statewide conservation plan, and strategies for increasing milkweed.

“We think we can do that by planting seeds and live plants on public lands, parks and wildlife management areas, on some of the conservation lands that are owned by places like the Audubon Society and the Crane Trust and the Nature Conservancy,” Hovorka said. “We'd also like to see some different management along county and state roads. Right now we do a lot of mowing in places and at times we don't need to, and so that takes out the milkweed populations.”

Weissling said they could also work on convincing businesses and homeowners to embrace milkweed as an addition to their landscaping, and just think differently about where milkweed could be allowed to grow. “My approach would be you don’t have to get rid of all of it,” Weissling said. “Maybe think of areas that are marginal for crops or areas that you don’t put in any crop production that maybe you could grow some milkweeds on.”

It could take a lot of milkweed to reverse the trend. Hovorka said the U.S. Fish and Wildlife Service is talking about a five-year goal of having a milkweed presence on seven million acres nationally, primarily in the Great Plains. He said a million of that could be in Nebraska.

“We're not talking about fields of milkweed,” Hovorka said. “There are some milkweed seed plots that are being planted that we need because we need a lot of seed in order to put that many plants out. But for the most part this is scattering milkweed across the landscape in school yards and in backyards. On ranches, on public lands.”

Nebraska Game and Parks has already started doing some of this work.

That includes working with partner organizations in September to plant 3,000 milkweed seedlings along stretches of the Cowboy Trail, a Game and Parks recreational trail that runs from Norfolk to Valentine. The project was funded by a $150,000 grant from the National Fish and Wildlife Foundation.

"Federally and regionally and within the state, there’s just a groundswell of interest right now in making sure monarchs are doing better than they appear to be doing the past few years," Taylor added.

Hovorka said while Nebraska may be behind some states in developing a plan, projects like this are a sign the state is “ahead of the game” in bringing back monarch habitat, an effort he said is important because it has a broader impact than the loss of butterflies.

"We have bees and other pollinators that are critically important to the ag economy and to growing some of the foods that we have," Hovorka said. "So it's not just about losing monarch habitat. We're losing bees. We're losing the other pollinators. The monarch is sort of the big, flashy, bright species that people love. It's an easy thing to talk about. But what we really need to do around the landscape, while we’re restoring habitat for monarchs, we’re also restoring habitat for bees, for other pollinators, we’re diversifying the prairies that we have, and so that's good for a lot of different kinds of wildlife."

Back at Nine Mile Prairie this summer, Weissling flipped over a milkweed leaf to expose a yellow and black striped monarch caterpillar. He found 14 of these during his statewide summer survey, but said the statistics are more starting point than barometer at this stage. Just another part of an effort Weissling hopes will save what he calls the bald eagle of American insects.

This story was produced for NET's partnership with Harvest Public Media, a reporting collaboration focused on issues of food, fuel and ﬁeld.