, Reporter/Producer and Will Bauer 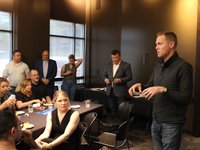 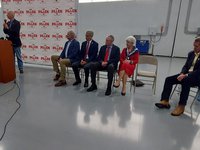 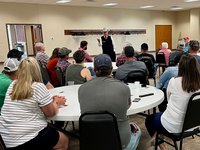 Brett Lindstrom had stops scheduled in Grand Island, Hastings, Lincoln and Omaha. Lindstrom told a crowd of about two dozen at the Venue restaurant in Lincoln he’s proud of running a positive campaign.

“To me it’s the right message, not only as a dad but as a candidate and future governor, that we tell the youth of Nebraska, we tell young men and women that you can do this is a positive way, you don’t need to cut people down to accomplish big things,” Lindstrom said.

Polling shows Lindstrom locked in a tight race with Jim Pillen and Charles Herbster for the Republican gubernatorial nomination.

Pillen also made a number of campaign stops across the state Monday. Starting in Omaha, Pillen flew to Norfolk, Lincoln, Hastings, Scottsbluff and Columbus. In Lincoln, endorsers Gov. Pete Ricketts, former Gov. Kay Orr and Mark McHargue spoke in support. The Columbus area pig farmer spoke about Nebraska’s children, and said keeping youth from leaving the state – the so called “brain drain” – will be a key for the next governor.

“Guess where the grass is the greenest and the tallest. Right here in Nebraska for our kids. It’s a big deal,” Pillen said. Because the Republican gubernatorial primary race is so close, Pillen asked his supporters to urge their friends to support him in Tuesday’s voting.

Herbster was also busy on the final day before the election, making appearances in Byron, Bruning, and Seward. He also had scheduled a teletown hall with Kellyanne Conway, counselor to former President Donald Trump, Monday evening.

According to some recent polls, as much as a quarter of Nebraska Republicans were still undecided on the election.