The number of behavioral health providers in Nebraska has increased 17% since 2010, according to a new report from the Behavioral Health Education Center of Nebraska, or BHECN.

81 of Nebraska’s 93 counties are considered mental health professional shortage areas. But BHECN has been chipping away at that problem since 2009.

In the legislative report released this week, BHECN outlines its educational, training, and outreach programs for the past two years. 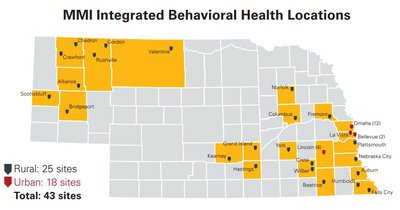 "It’s still not enough to meet the needs," BHECN Director Dr. Marley Doyle said. "And so ideally we would have an increase in all of the categories."

Non-prescribers in Nebraska, like counselors and therapists, are also growing. But addiction counselors decreased 20%.

Rural parts of the state have much more significant shortages, but Doyle says they’ve also seen a lot of improvement.

"So in addition to having people physically go out to those areas, we've been innovating ways of training providers in telehealth and thinking of alternative ways to get the care to the people at that part of the state without necessarily having a physical person there," Doyle said.