Real farm life, at the intersection of arts and agriculture

Artists use their work to understand the human experience. So here in America’s breadbasket, many artists turn their eyes on Midwestern farming. The intersection of agriculture and art features a lot more than amber waves of grain.

In a living room converted to a theater for the evening, Ethan Peterson and Madeleine Russell portray the characters from Mary Swander’s play, “VANG.” In it, the actors share the emotional stories of four immigrant couples who farm in Iowa. Swander used transcriptions of conversations with Hmong, Mexican, Sudanese and Dutch farmers to create the play.

“I'd written another play called ‘Farmscape,’” said Swander, who is Iowa’s poet laureate and an English professor at Iowa State University, “that was a verbatim play, a sample based on interviews of people in all sorts of different areas in the changing farm landscape. And I worked on that with my students and it toured extensively in Iowa and the Midwest, out to New York, Colorado.”

The success of “Farmscape” helped propel “VANG” into more communities. And the reception the plays have received, especially in rural locales, has led Swander and Fred Kirschenmann, of Iowa State University’s Leopold Center for Sustainable Agriculture, to consider how the messages of the arts might help bridge the chasm between farmers and consumers. 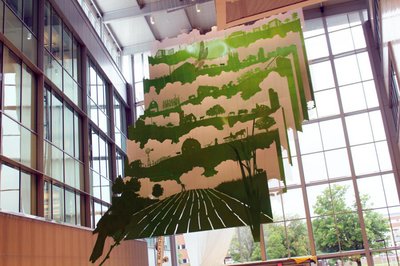 A series of sculpted metal panels, “Floating World” depicts 150 years of agriculture and hangs in a new building on the campus of Iowa State University. (Photo by Amy Mayer, Harvest Public Media)

“We all understand now that there’s, although that’s changing, that there’s a pretty large divide between the farming community and the general public,” Kirschenmann said.

Performances and other artistic works can help bring people closer to a shared understanding, he said. He and Swander are working now to launch a national non-profit called Ag Arts to help other communities experience that.

Both the separation of farmers from consumers and lifestyles that allow for time to enjoy the arts could be considered natural outgrowths of settling and cultivating the land. In 1840, the great orator Daniel Webster said, “When tillage begins, other arts follow.”

Lynette Pohlman, director and chief curator of university museums at Iowa State University, says that resonated with settling the prairie.

“Go to the west, make your life, and after you get through with subsistence, and you can feed and clothe and house yourself, the other arts will come along,” she said.

The theme is evident in the art on the Iowa State campus, include a set of murals designed by renowned Iowa artist Grant Wood, which includes “Breaking the Prairie” and “When Tillage Begins, Other Arts Follow.” 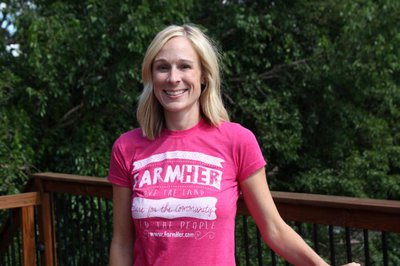 As a photographer, Guyler-Alaniz wants her work to help broaden the perception of what farmers look like to include women. (Photo by Amy Mayer, Harvest Public Media) 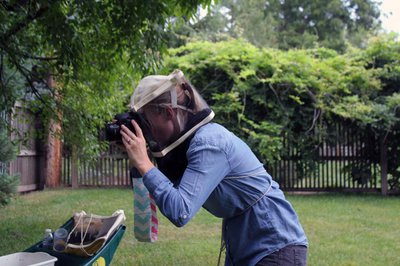 For her series depicting women working on the farm, Guyler-Alaniz has traveled all over the Midwest. Here, she shoots McGuire tending to bees. (Photo by Amy Mayer, Harvest Public Media) 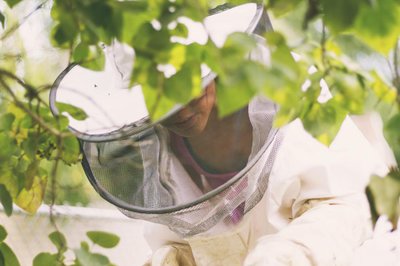 Pohlman says Iowa State’s campus was inspired both by the great universities of the East, with their imposing buildings, and sculpted landscapes.

The thinking, Pohlman says, was that “you learn better, and you’ll become better citizens, and your goal for contributing to humanity will be at a higher level if you are an inspired individual.”

Beauty will inspire. But art also reflects the values of the institution. Of the 2,000 works of public art on campus, Pohlman says half have a direct connection to agriculture.

“Floating World” is the newest addition. It’s a series of sculpted metal panels that depict 150 years of agriculture. They hang in the atrium of Iowa State’s new Biorenewables Research Laboratory.

Art, Pohlman says, is also a learning tool, and has been used for propaganda. Those Grant Wood murals, she says, were propaganda intended to recruit farm kids to the university.

Photographer Marji Guyler-Alaniz saw the commercial during the 2013 Super Bowl and appreciated the beauty of the images.

“About a month later, I read an article in the Des Moines Register that pointed out that there was a lack of women in that commercial,” she said. “And it was kind of an ah-ha moment for me.”

FarmHer was born. It’s a passion project, Guyler-Alaniz says, with the lofty goal of updating the popular image of farming to include the women.

With her camera, she has followed dairy farmers in Wisconsin, documented chores in Illinois, and photographed from horseback while an Iowa woman rounded up cattle. This fall, she’ll visit five women farmers in Nebraska.

On a summer evening in Des Moines, she met with beekeeper Julia McGuire, who secured a veil over Guyler-Alaniz’s head before they approached the hive. It was the first time Guyler-Alaniz had been so close to bees, but she came prepared with long pants, long sleeves and boots, despite the dripping humidity.

Guyler-Alaniz photographed McGuire and the bees for about 20 minutes, peppering her with questions.

“I have barely talked to you, how did you get into this?” she asked, as McGuire checked the brood, looked for mites and assessed the hive’s productivity.

Everyone likely has an image of a farmer in mind. Guyler-Alaniz wants her photographs to give a fuller picture of what agriculture really looks like today.

“Art is to stop and make you think,” she said. “That’s the goal of what we do, right? Is to put something out there to change an image or to update a perception.”

She knows it will take time. But since we no longer all have to grow food, we have time for other things, including art. In fact, Daniel Webster credits agriculture with far more than just inspiring the arts. His 19th century speech continues, “The farmers, therefore, are the founders of human civilization.”