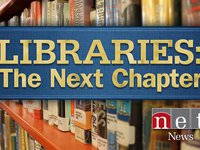 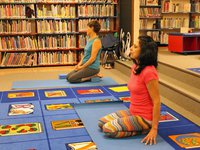 The Pew Research Center surveyed Americans this year about what they want to see in their public libraries. One theme that surfaced over and over again: people want libraries to provide more, and varied services and programs for the communities they serve. As part of the NET News special reporting project, “Nebraska Libraries: The Next Chapter,” we look at how our state’s libraries are becoming more than warehouses for books.

More than a century ago, wealthy industrialist Andrew Carnegie gave millions to fund 1600 public libraries throughout the United States, including 69 in Nebraska. He believed anyone with access to books and the desire to learn could be successful. 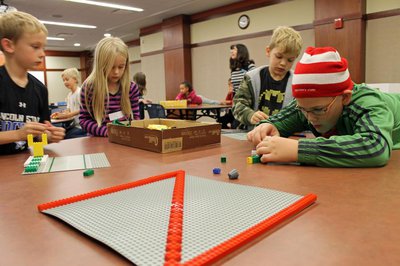 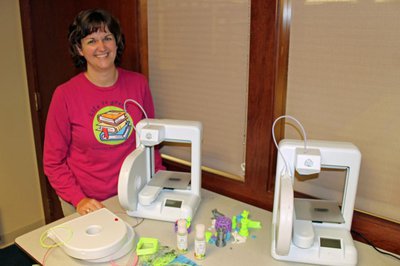 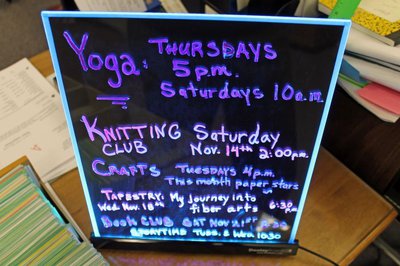 But did he ever expect to hear people chanting “ummmmmm” amidst stacks of children’s books?

It’s the twice weekly yoga class at the Chadron Public Library, one of the Carnegie buildings still in use. Rossella Tesch has been teaching these free yoga classes for 12 years; she’s also director of the library. Today there’s just one person in her class. Sometimes there are a dozen.

“It's free, and we wanted to keep it free,” Tesch said. “We want people to feel they can come when they want to.”

Four hundred miles to the east, it’s Lego Monday at the much newer Seward Memorial Library. Elementary and middle school kids start with a broad challenge; on this day it’s make something holiday-related. Then it’s a creative free-for-all for the 20 kids and 40 pounds of the plastic building pieces. This after-school program is new at Seward this year.

“It just took off,” Seward Library assistant Megan Boggs said. ”As soon as kids knew that we had Legos they were really excited to come and build with them.”

Yoga? Legos? Aren’t libraries supposed to be places to get books?

“Libraries are no longer just about books. I think it's exciting that now we are more than that. I think more time passes, more roles we will cover,” said Tesch, whose library has also put on movie festivals, taught tango dancing and offered programs on bats and herbal medicine.

“Libraries are all about education which can take many forms,” said Seward Memorial Library director Becky Baker, who has seen program growth during her 36 years at the library.

At Seward that’s meant Legos, but also things like pitch tournaments, adult coloring and 3-D printing. Baker said surveys have told them people in Seward want more of this.

“I think we just want to meet the needs of the public in whatever way we can, and in Seward really there's not another group that could do this, that exists,” Baker said. “A lot of people go to Lincoln for extracurricular things and so we have a lot of travelers, and we’d like to keep them home more.”

“It's also a great community building thing, and the library is really being seen more and more as a community center as well as just a place for books,” added Boggs, who teaches technology and other classes at Seward and added that “it's not just kids. When I first started offering the programs on 3-D printing, it was interesting because I thought I would just have a whole bunch of teenagers (who) would be all over it, and it was actually the adults who were coming to the program that was my biggest audience.”

It’s also fair to say this has helped grow traditional library activity like checking out books. While program attendance has increased, so has the number of registered borrowers, i.e. library card holders; up 20 percent in the last decade. “It's neat because once we get them in the doors, then they realize all the other things that we have to offer as well,” Boggs said. “So getting them here through a program but then saying ‘hey, we also offer these books and audio books and CDs and all of the traditional material libraries are known for.’”

Public demand and the desire to remain a viable, needed entity has driven growth in library programs, but Pasco said the automation of some traditionally labor-intensive library functions, like book check-out, is also a factor.

“I would certainly believe that as technologies began to support some of the processes within libraries, that freed up librarians’ time to back away from the desk, leave their keyboards behind, and interact in a more robust manner with all their patrons," Pasco said. "And anytime you get professionals working with the public, then things change rapidly.”

Change means challenges. Adding programs stretches resources and stresses mostly unchanging budgets. Plus old facilities like Chadron’s library weren’t built for yoga classes, so they move furniture to create an open space in their basement children’s room. In spite of this, Pasco said she’s never felt more energy in the library world that she’s been around for 40 years.

“In terms of, we're going to reorganize and renovate and revamp our spaces so that we customize them to the actual need to the people who use them, instead of ‘this is what we have, I hope it works for you.’ That ship has sailed, that approach is gone,” Pasco said. “I think as a more diverse, younger profession is developing, what they believe libraries ought to be doing is changing what libraries are doing. And we have much more of a community presence than ever before, and so what they bring back from their work out in the community is infectious and changes what happens in the library itself.”

But would 1900s library philanthropist Andrew Carnegie have approved of yoga classes in one of his buildings?

“Who knows,” Tesch laughed. “Maybe. Probably. I think (he) would have had a very wide open mind!”