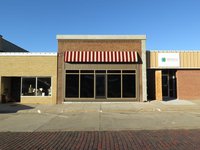 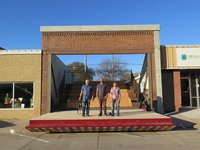 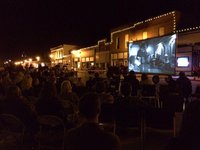 A secret lies behind a downtown storefront in the small northeast Nebraska town of Lyons. It's one of four public art projects in rural communities in northeastern Nebraska, collectively called the Byway of Art.

On a Monday night, Main Street is closed — for a movie, according to signs on the barricades. A crowd has gathered on the brick pavement. Suddenly, what appears to be an empty storefront begins to move. People watch with anticipation as the facade leans forward, lowering down toward the street.

After the façade comes down, a stand of bleacher seats slides forward from the empty building, creating outdoor seating for 80 people. Lyons’ Storefront Theater has become a reality, and the crowd claps and cheers. 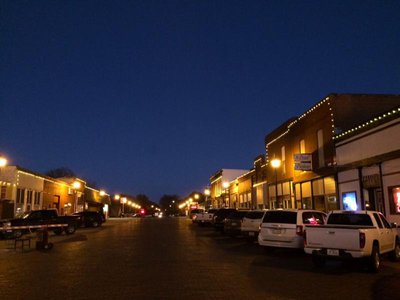 Lyons' main drag, before the streets were closed for the movie screening. 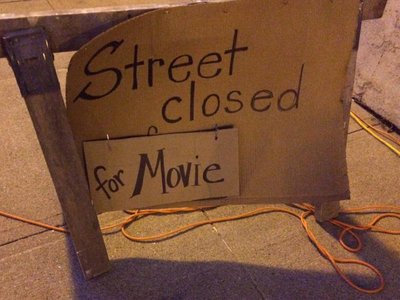 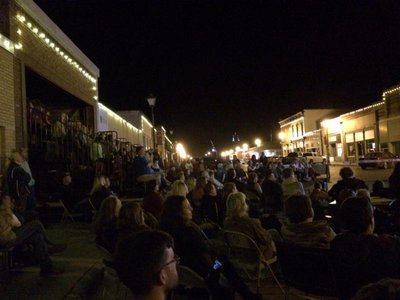 Locals sit on bleacher seats in their transformed storefront theater to watch the movie.

Bill Hedges is a longtime Lyons resident and amateur filmmaker.

“Theaters were a big thing, even in the 60s, that's the place to be on Saturday night,” Hedges said. Stores would stay open late and people would come into town to shop, hang out, and catch a movie at the theater.

“[Theaters are] just a great place to gather but with the advent of VCRs, people started watching movies in their homes. That's probably what led to the decline of small town single-screen theaters,” Hedges said. As a teenager he worked as a projectionist in Lyons’ movie theater. Decades after it closed, he purchased the building to restore it and convert into his own filmmaking studio.

The importance of Lyons’ downtown, and its movie theater, came through in community discussions last year led by conceptual artist Matthew Mazzotta. He set up living room furniture on the street and invited locals of all ages and backgrounds to sit down and talk about their town.

“When we did our living room [in Lyons], people spoke about the downtown and they said hey, you know the downtown used to be a space for social life, used to be for commerce, and now, we look at it and it's kind of gone fallow,” Mazzotta said.

Then he asked them what the town had that it wasn’t using. They named a few things, Mazzotta said, but noted “that building right there is only a façade.”

Someone else said there’d been an attempt to create an outdoor movie theater in the past. All this informed Mazzotta’s eventual project idea—transforming the building shell and façade into a pop-up outdoor theater right on Main Street, in the heart of downtown. Mazzotta said his work transforms buildings or the places we live into something that invites people to relate to and connect with each other.

“If people don't have public spaces that they all mingle in, then the conversation is very limited,” Mazzotta said. “However, people get to sit together and look at their town through new eyes and maybe with a little creativity in the background, I think then the conversation about where the town is going changes.”

Lyons’ Storefront Theater is one of four community public art projects in northeastern Nebraska led by the Center for Rural Affairs. Former Lyons resident Adele Phillips created the project and secured a $200,000 grant from Artplace America. She invited Mazzotta, who she knew from architecture graduate school, to help with the projects, but said they had no preconceived ideas of what the art would look like.

“The Byway of Art project is a framework for allowing each of these communities to generate a very unique artwork which highlights their inherent special characteristics,” Phillips said. She chose the towns of Lyons, Decatur, Oakland and Macy because they’re close to each other and each offered a chance to showcase local talent and knowledge, “and the loyalty and the willingness to invest in making their towns great,” Phillips said.

Phillips is passionate about bringing arts into rural communities. She said too often “The Arts,” are seen as highbrow, elite, or limited to urban areas—and arts funding can be similarly limited. In fact, she found it hard to even secure funding for a rural arts project in Nebraska because most of the money was slated for urban areas in other states.

“Capital C ‘Culture’ isn't seen as something that rural towns can contribute to or participate in,” Phillips said. “And I thought that this project would be a way to prove otherwise.”

Phillips admits at first, she wasn’t sure the idea would fly.

“I didn't know what kind of reaction I would get but part of me thought that maybe people would be a little anti-arts project. And they weren't,” she said.

Wyatt Fraas of the Center for Rural Affairs said there has been a tremendous amount of community support and participation in these projects through donations of time, money and materials. Bringing people together—both in creating and using these art pieces—is the key goal, Fraas said. The projects may also draw outside visitors or give an economic boost to town. Frass said this could work in downtowns or on Main Streets in other rural communities too.

“We look at this project as the starting place,” Frass said. “And neighboring communities in particular have been hearing about this and looking at what's going on and saying, oh! That sounds fun, that sounds exciting. What could we do like that?”

Rural Legends and the Storefront Theater have debuted in their communities. The projects in Oakland and Macy remain in progress.

Back on Main Street in Lyons, people take their seats on the bleachers as a tractor pulls a large screen in place. Filmmaker Hedges created a movie for the inaugural screening about the history of downtown Lyons, starring several local residents.

Mazzotta said this experience is the culmination of all the months of work by the community.

“We are opening the theater right on the downtown, making downtown into a theater, and then we're playing a movie about the history of the downtown, it's almost like a meta thing,” Mazzotta said. “This to me is almost like a call to arms, it's saying.... for the people that have been here for a while, where are we going next?”

That question may also have been on the minds of locals in their new outdoor theater as they sat back, blue light cast across their faces, ready to enjoy the show.