On the eve of a high-stakes budget hearing, senators expressed widely different views of proposed cuts to the University of Nebraska. And Sen. Bob Krist’s candidacy for governor was welcomed by Nebraska Democrats, whom he joined Monday.

All four University of Nebraska campuses have released lists of programs they would cut or eliminate if Gov. Pete Ricketts’ proposed budget cuts are approved by the Legislature.

In Lincoln, Chancellor Ronnie Green called it “serious business,’ releasing a list of proposed cuts including eliminating some or all degrees in geography, electronic engineering, and art history, and closing the Haskell Agricultural Laboratory, which serves northeast Nebraska.

University of Nebraska at Kearney Chancellor Doug Kristensen released a list of what he called “unprecedented” proposals to eliminate men’s baseball, golf and tennis, and cut positions in business, education, arts, humanities and sciences.

At the University of Nebraska at Omaha, Chancellor Jeff Gold called it a “bitter pill” listing proposed cuts of faculty in business, public affairs, community service and education. And the Med Center in Omaha, also headed by Gold, said it would increase tuition, eliminate programs in developmental neuroscience, gerontology nursing, and forensic science, as well as cut faculty in pharmacy, cancer treatment and public health.

Sen. John Kuehn of Heartwell, a frequent critic of university positions, accused officials of bluffing. “This is a continued escalation of a political game of chicken with members of the Nebraska Legislature. And ultimately I don’t think it is helpful,” Kuehn said.

Sen Adam Morfeld, whose Lincoln district includes the university campus, rejected that claim. “The only people that are playing chicken is Sen. Kuehn and Gov. Ricketts, in proposing these draconian cuts on a university system that is helping drive the economy and get us out of the recession,” said Morfeld.

Morfeld faulted Ricketts for proposing both budget and tax cuts at a time when state revenues are lagging. Kuehn said the $35 million in proposed cuts amount to about half a percent of the university’s overall budget, suggesting they could be covered from $300 million in university cash funds. The issue will be discussed at an Appropriations Committee public hearing Wednesday afternoon.

Also Tuesday, Sen. Bob Krist, who is running for governor, was warmly embraced by members of the Nebraska Democratic Party, which he joined Monday, after longtime membership in the Republican Party, and a few months as a registered nonpartisan. 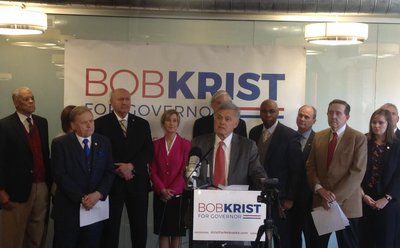 Krist was introduced at a news conference by Lincoln Mayor Chris Beutler, a Democrat and former member of the officially nonpartisan Legislature. “Bob Krist, in my opinion, will be a governor who stands up for common sense and against partisanship from either side. He will be a man who looks at Nebraskans in all walks of life and ask ‘How can we help this woman or this man achieve the promise of the Good Life?’” Beutler said.

Krist said he would not agree with either party on every issue, but staked out positions in contrast to Ricketts, a Republican, including Ricketts’ proposed university budget cuts and opposition to any new taxes. “I don’t think there’s anybody in this room that thinks we can cut our way out of the problem like we’re in right now. We have to find new revenue – I don’t there’s any question about it. And I will not make a promise that I will not do everything I can to put new revenue into the system,” Krist declared.

And Tuesday afternoon in the Legislature, the Transportation and Telecommunications Committee held a public hearing on proposed legislation dealing with autonomous vehicles. One proposal, by Sen. Anna Wishart, would allow the city of Lincoln to test autonomous vehicles downtown as part of its StarTran public transit system.

Sen. Tom Briese asked Lincoln Assistant Transportation Director Lonnie Burklund, testifying in support of the proposal, about safety. “How foolproof is this technology? I mean, a little kid jumps out in front of it – guaranteed to stop?” Briese asked.

“I would say so, yes,” Burklund replied.

Burklund told about a recent demonstration he saw. “We did a test case, where there was a shuttle traveling probably somewhere in the neighborhood of 15 miles an hour. And I was there, from probably from you-to-me away, as the vendor stuck his foot out in front of the bumper from kind of a side street access. And the shuttle immediately came to a stop,” he said.

Wishart’s bill would limit autonomous vehicles to 35 miles an hour. It was opposed by Carla Jacobs, representing Uber, who said it would restrict permission to one company working with the city of Lincoln, and by Rhonda Lahm, director of the Department of Motor Vehicles, who said Nebraska needs a unified, statewide policy.

The committee also heard testimony on a bill by Sen. Tyson Larson, to permit autonomous vehicles to be tested on any highway in the state. Lamm was neutral on that proposal, offering to work with senators and the Department of Transportation on the legislation.

Editor’s note: By way of full disclosure, NET Television receives some funding from the University of Nebraska-Lincoln.