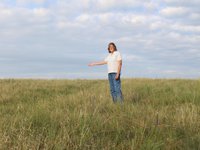 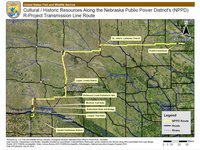 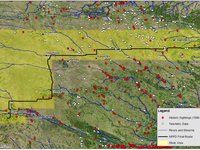 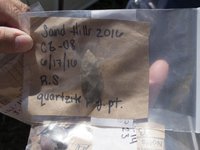 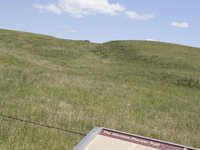 A proposed electric transmission line that advocates say is important to Nebraska’s future is running into some obstacles from the past, including pioneer trails and Native American artifacts. These are the latest twists in the tangled tale of the so-called “R-Project.”

From the rest area off Interstate 80 in central Nebraska near Sutherland, you can easily see the smokestacks of the Nebraska Public Power District’s Gerald Gentleman power plant.

What’s harder for the untrained eye to spot lies just across the fence line from the rest area, on a grassy, unplowed slope. That’s when it’s handy to have a tour guide like Linda Tacey of the Sutherland Historical Society point things out.

“Right here, if you look up the hill, can you see this swale, the indentation from right here over to here? That’s where they traveled,” Tacey said, pointing.

“They” were pioneers who came through this area starting in 1840 on the Oregon Trail.

The R-Project transmission line would cross this area with wires carrying 345,000 volts of electricity, suspended from towers 87 to 140 feet tall. Beginning at the power plant, it would swoop across the Oregon Trail, the Mormon Trail, and an area rich in Native American artifacts along Birdwood Creek, before heading north and east across the Sandhills, a distance of 225 miles.

The line is a project of the Nebraska Public Power District, and NPPD’s Tom Kent says it’s needed to improve reliability of the electrical service in north central Nebraska. 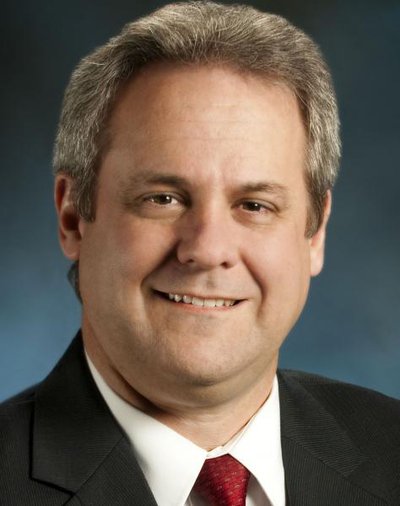 Kent says in the drought year of 2012, NPPD couldn’t reliably deliver enough electricity to that area to meet the demand, primarily from center pivot irrigation systems. And he says the utility has at times scrambled to keep up.

“We had to bring in mobile generators during the summer months to ensure that we had the ability to provide electricity, since the transmission system wasn’t going to be able to get it into that area,” Kent said.

Kent says NPPD will do what it can to avoid, minimize, or mitigate any disturbance to historical sites. Specifically regarding the Oregon Trail crossing near the rest area, he says the power line won’t change all that much.

“If you look around that area, there’s already an interstate there, there’s already other things there. We are not going to build right on top of where the Oregon Trail ruts are,” he said. “I don’t know the fact that there’s a power line there really changes the aesthetics of what’s around there to any significance.”

But the potential impact to historic sites is one factor leading a federal agency to take a closer look at the R-Project. The U.S. Fish and Wildlife Service has been evaluating whether to give NPPD a permit it needs to go through the habitat of the American burying beetle, an endangered species.

Last month, the service held a public hearing in North Platte. About a hundred people crowded into a hotel conference room. Fish and Wildlife’s Bob Harms updated the crowd on how his agency’s looking at the proposed power line.

“We are going to reevaluate alternatives that might have less of an impact on historical and cultural resources. Why? Well, the lay of the land has changed,” Harms said. 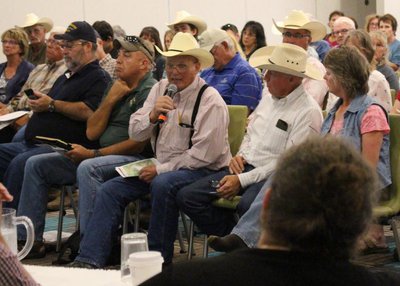 Member of the public weighed in at a public hearing in North Platte. (Photo by Fred Knapp, NET News)

Beyond concern for historic sites, Harms cited new information about the number of whooping cranes – also an endangered species – which use the area. And he mentioned landowners’ concerns that the line could encourage building wind turbines in the Sandhills, which many residents say would scar the land and spoil the view.

So far, wind energy projects generating more than 1,000 megawatts of electricity, and requiring hundreds of turbines, are on a list of potential tie-ins to the R-Project. The list is compiled by Southwest Power Pool, a 14-state group that NPPD belongs to. Harms says Fish and Wildlife might be able to require a change in the route of the power line as a condition of issuing a permit.

NPPD’s Kent has a different perspective.

“I know there’s a lot of confusion there. But the routing authority is something that’s granted to NPPD and our process for developing transmission lines,” Kent said. “We went through a very involved, multi-year process with lots of public impact to determine the route that we’re at, and the route that we’re at minimizes given all the different considerations.”

“We like our electricity. We understand the need that NPPD has for this line. We just wish that they would move the line so it does not go through three sections of pristine ruts and trails that have been preserved for over 175 years,” Tacey said.

Others, like Cleve Trimble, don’t want the line built at all.

“Rerouting it? I mean look at us – all of us here,” Trimble told those at the public hearing. “That’s like diverting the shark to another swimmer. Is that fair?"

“We’ve had 28 different open houses and public hearings. We’ve talked to literally a couple thousand people, held community conversations; we continue to meet with the landowners,” he said.

But project opponents who packed the North Platte meeting sounded far from convinced those efforts were enough. Among them was Neal Hansen.

“It’s wrong to have these public hearings and pretend like they’re listening to you people, when they have no intention to do a damn thing about it,” Hansen said, to applause.

Kent says some objections may be inevitable. But he says it’s important to move ahead with the R-project, which was originally scheduled to begin carrying electricity last January.

“We have been listening. We have been trying to find a way to minimize impact,” Kent said. “It’s just that with any big project, whether it’s a transmission project or a big economic development project, some people don’t like the answers.”

A decision from the Fish and Wildlife Service about giving the R-Project the permit it needs may come by the end of this year.

Hunt Wants Info From AG on Capitol March; Bills Include Meatpacking Safety, Government Efficiency, Doxing,
Facial Recognition Is Not Just for Your Phone. It Could Be Used to Prevent Livestock Disease.
State and Federal Efforts to Help Small Meatpacking Plants May Take Time