In 1998, there were only four wind turbines in the entire state. Now, there are more than 700. But as Nebraska’s wind farms continue to expand, finding trained people to work them has been a challenge. A unique education program is trying to change that.

Patrick Miles didn’t really like his job working in the food and beverage industry.

“Well, I’ve been doing the same thing for the past 15 years and I got kind of tired of it," Miles said.

So when he found out he could have a career in a field that actually interests him, and pays well, he thought he’d give it a shot. Even if he had a lot to learn.

“I’ve always been kind of interested in renewable energy. I’ve never been really mechanically inclined so this kind of is a big learning curve for me," Miles said. 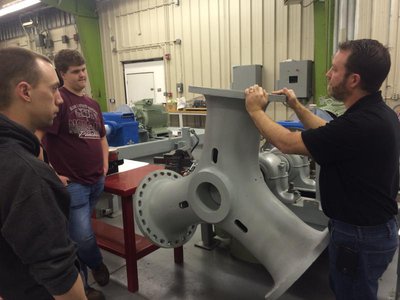 In a large workshop, Miles and three other students are studying a stripped-down wind turbine. It’s a smaller version of what you’ve probably seen driving around the state. It’s part of an industry on the rise, says John Liewer, a wind energy instructor at Northeast Community College in Norfolk.

“It should continue to grow in the foreseeable future,” Liewer said.

Liewer is teaching students the basics of being a wind turbine technician. This program began in 2009 and has since expanded with the help of a $365,000 grant from the Department of Energy. That’s allowed the college to add a fully functioning turbine onto its campus. It gives students hands-on experience -- everything from knowing how to safely climb turbines reaching 100 feet into the air, to safely replacing a faulty part.

“We can’t get too specific in certain models or procedures because it varies so much based on the manufacturer of the wind turbine and the site you go to," Liewer explained. "We give them the skills - the kind to give them a head start and hit the ground running when they get into the field.”

Dierdre Hirner is the Midwest Region director at the American Wind Energy Association.

“Not only is a wind turbine technician one of the fast-growing career opportunities, it is actually the fastest growing job in the United States,” Hirner said.

The growth rate for wind turbine technicians is more than double the rate of the second-fastest growing category, occupational-therapy assistants.

“We see that wind employs over 88,000 Americans and that includes the wind technicians, but those are other jobs in construction and manufacturing as well," Hirner said.

Construction is underway on 81 wind farm projects in 25 states, several of which are in Nebraska. The biggest is the Prairie Grande near O’Neill, which is expected to have 200 new turbines. 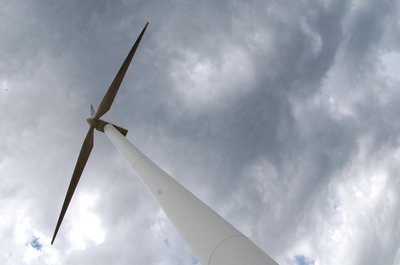 “When we look at where we’re constructing these wind farms, that’s about 33 billion dollars in new investments. We see that money going to both rustbelt states and to the rural areas in this country,” Hirner said

These projects haven’t come without their fair share of controversy. Some landowners have expressed concerns about harm to their property values due to noise and visual impacts from both wind turbines and transmission lines.

But with farm commodity prices on the decline in recent years, supporters argue wind energy can bring much needed revenue back into rural communities. Some argue the expansion of wind farms can also address another growing problem in small towns.

“We really struggle about how to keep our rural kids in rural communities,” said John Hansen, president of the Nebraska Farmers Union.

Hansen argues turbines offer a reason for young people to stay by providing much-needed jobs in rural areas. And he says that can help stop the “brain drain” away from rural areas.

“It takes a real toll on a rural community when you have these smart, hardworking, industrious kids that go off to a college education elsewhere and don’t come back home because there are no real economic opportunities for them,” Hansen said.

Back at Northeast Community College, Liewer said it’s something he’s noticed among his students who have graduated from the program. More often than not they find jobs in Nebraska, and that’s the way they like it.

“It seems like a lot of them want to stick around. That’s always kind of baffled me because I always hear about kids wanting to get out of their hometowns. So I’ve been surprised by how much they actually want to stay local. They want to stick around and close to home. The more development we see around here, the more it makes that possible,” Liewer said.