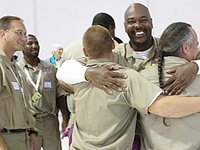 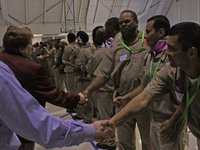 A group known as Defy Ventures believes some prison inmates have skills to create legal businesses of their own once they get out of jail. Two groups of inmates locked up in Nebraska want to take that challenge.

Defy began offering classes and support programming this fall at the Nebraska State Penitentiary in Lincoln and Omaha Correctional Center. At the start of the program 130 incarcerated men agreed to take part.

The program attempts to get those serving time in jail to think about who they are and what they could be outside of prison and away from a life of crime. Rather than focusing on the difficulty of finding a job once their sentences end, Defy works to identify the skills their participants already have to, in the words of founder Catherine Hoke, “put fast, legal money into their pockets.” 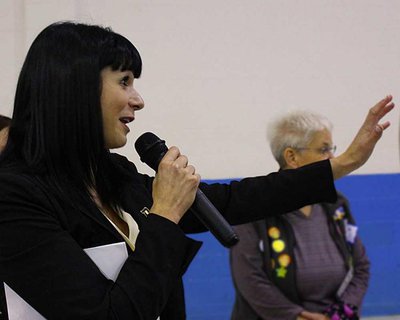 Once a Wall Street analyst who worked in the world of venture capital, Hoke had a revelation after visiting prisons in Texas where she found former criminals had skills that could be developed into legitimate businesses.

“A lot of people who have served time grew up in very tough circumstances that forced them to become natural-born hustlers,” Hoke said. “Many of them are really scrappy go-getters.”

Knowing how difficult it can be to find jobs with a criminal record, participants in the program get help with ideas for businesses of their own.

“We work with a lot of people who have committed very tough crimes,” Hoke recently told reporters. “Most of the people that we serve commit violent crimes, and we help them to transform their lives.”

While still serving time, Defy participants are offered classes and mentoring from volunteers in business. Those who develop solid business plans have the opportunity to pitch ideas to investors and get continued support in establishing their start-up venture.

Success stories from Defy in Texas, New York and California convinced the director of correctional services to give the still experimental program a chance to prove itself in Nebraska.

“They’re still early in their data collection process but the data is very positive, in terms of people that have completed the program, released, and not returned” to prison. 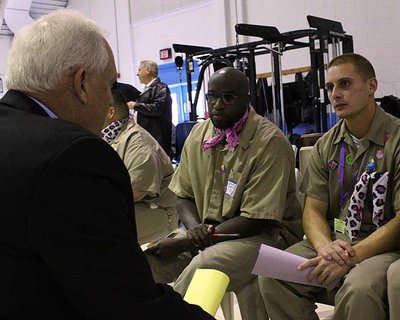 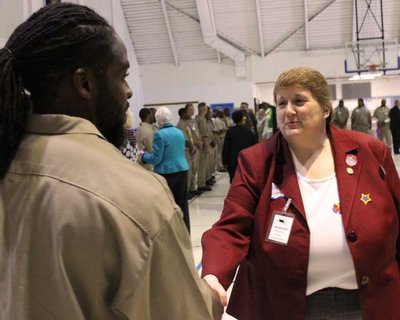 Defy claims less than five percent of its graduates have returned to prison facing new charges. In Nebraska, nearly a third of those in state prison system face new criminal charges. The program also boasts 95 percent of the graduates found employment. The organization helped create and finance 150 of the startups begun by those who were once incarcerated.

Also important, according to Frakes, was being “offered an opportunity to bring a program to our agency at no cost.”

Nationally Defy is funded by the Techstars Foundation. Another $2.5 million from Nebraska-based charitable foundations will pay for a three-year trial run of the program.

Hoke says “starting with a committed base of funders” in Nebraska provides a boost not seen in other places Defy has set up shop.

“The launch will be even more successful because we’re not starting from scratch,” Hoke said. 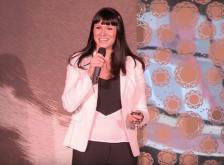 After the quiet start of the program at the Omaha facility, reporters were invited to attend the inaugural session at the state penitentiary in Lincoln.

The full day of exercises demonstrated for those in jail and observers the range of challenges facing the estimated 70 participants.

Volunteers from the business community, government, and non-profit organizations were asked to take part in the same exercises as the inmates.

In one small group session, a Lincoln-based businessman spoke with three men all dressed in their brown prison uniforms. The mentor conceded that for a long time “whenever anyone was applying with me and they had a criminal history, I threw the application away.” He said he now wants to help those who want a second chance in their lives.

The group included 26-year old Cash Ryba. He has at least seven more years on his sentence for dealing meth and cocaine. He already has plans to start his own carpentry business after he gets out.

Ryba says “to be able to learn all these etiquette and vocational skills and retain them when I get out, gives me a step ahead of everyone else.” But he worried aloud in the group how an employer would view having a gap in his resume that included time in jail.

The mentor was quick to encourage Ryba to tap into his strong, positive personality.

He asked Ryba how he got people to buy his illegal products out on the street.

“You sold them on quality,” the mentor offered. “To get an employee to hire you, have to get to sell the employer on yourself.”

Ryba nodded, understanding that he had qualities he could sell in a job interview.

Hoke made clear from the start she expected the men taking part to act accordingly.

“When I walked into that room, a lot of them looked like a bunch of thugs and inmate stereotypes. I told them, 'Do you want people to judge you for your stereotype? Is that who you are, or are you capable of more than that?' Hoke said. "They sat up straight, and they showed me respect almost immediately.”

On the first day, the program was introduced at the penitentiary the inmates generally were respectful and open to the exercises led by Defy staff.

Hoke spent more than an hour with one exercise, pacing between inmates and volunteers facing one another. After each increasingly personal and difficult question, people were asked to take a step forward if the question or statement was true in their lives.

“How do you act out?” Hoke asked, pacing between the rows.

Hoke asked the group to step forward if “there are some things I have not forgiven myself and I may never forgive myself.”

“We push them out of their comfort zones,” Hoke said. “It’s emotionally challenging for them. They have deep childhood wounds and issues that they’ve had with their parents, so they have to have courage to be willing to go there.”

The tough questions and demanding schedule of classes and homework will continue through early next year. Not everyone will graduate right away.

Even the application to get into the program demands effort. It’s a 15-page questionnaire that includes a lengthy essay.

The first day’s session ended with standing ovations for the Defy staff, the volunteers on hand, and even the staff of the Department of Corrections. This came after a year of prison escapes and assaults on prisoners and staff at the facility.

The response was welcome news for Director Frakes.

There is already discussion of expanding the program into the Tecumseh State Correctional Institution and the Nebraska Correctional Center for Women in York.