A businesswoman wants to move from Lincoln City Council to the U.S. Senate. We profile Democrat Jane Raybould, as we continue our NET News Campaign Connection 2018 coverage of the Senate race.

Jane Raybould believes political change is coming, and the time is right for a Nebraska Democrat to ride that to a seat in the U.S. Senate. 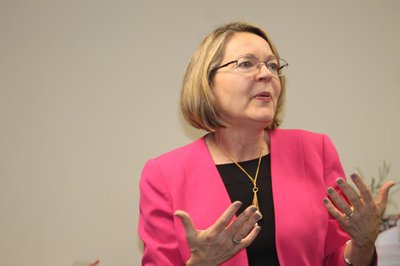 (Note: Since Libertarian candidate Jim Schultz is uncontested we are not including him in our primary profiles, but plan to include him in our general election coverage.)

Libertarian (not contested in primary)

Campaign Connection 2018 is the home for NET News coverage of the 2018 elections.

“It's certainly right for so many candidates, great candidates running up and down the ticket,” Raybould said. “But yes, we do see this blue wave coming to our state of Nebraska without a doubt.”

That would be a change for a state where Republicans have a 48 percent to 30 percent advantage over Democrats in voter registration, currently hold all five seats in Congress and have easily won most major contests in the last decade. Raybould herself was on the losing end in 2014, when she was a candidate for lt. governor. From that, Raybould said she learned that she loves campaigning, and said she’s now running for Senate for one simple reason.

“Washington, D.C. is broken, and it's time we send some common-sense Nebraskan there who will work for all Nebraskans and make sure she knows how to build coalitions,” she said. “I've spent my entire career building coalitions with my colleagues on the city council and county board, and that's what I intend to do, to find that common ground and to find those compromises always in the best interest of my state and of the country.”

The 59-year-old Raybould is a life-long Democrat currently in her first term on the Lincoln City Council and is vice chair. Before that she was on the Lancaster County Board. She was born and raised in Lincoln, then left for a while. She earned a bachelor’s degree in political science, business and French from Creighton University and a master’s in Russian studies from Georgetown University, and worked for the District of Columbia Building Industry Association.

Since returning Raybould has worked for B & R Stores, her family’s large grocery business, as vice president and director of buildings and equipment. “You know as a grocer, I feel very uniquely qualified as I listen to the customers that come in through our grocery stores and I feel very connected to, and I share their concerns about what is impacting their families or their farms or their children's education or their healthcare.”

On healthcare, Raybould said “mend, not end the Affordable Care Act.” “You know we need to stabilize the market, and then we need to look, maybe is it a Medicare for all program, or is it an expansion of Medicare? All I know is when I travel around Nebraska, our seniors say, ‘I love my Medicare. Please don't mess with my Medicare.’ So healthcare reform is what I'm hearing from Nebraskans.”

Raybould said her budget priorities include “healthcare, public education, of course infrastructure. We know how vital that is to our ag economy in our state and to all other businesses in our state as well.” She added, “We need to make sure that Social Security and Medicare funding are there for our seniors. That's where our priorities need to be, and we have to be focused on that to make sure that those programs are fully funded and they stay funded past the 2034 or the 2037 deadline.”

And while she thinks there are some good things in the recently passed federal budget, like money for roads, she’s not a fan of $1.3 trillion of spending. “The omnibus budget, unfortunately it seemed like it was a necessary hurdle for government to get through at that time. I don't like deficit spending. I'm a businesswoman, I'm a fiscal conservative.”

Raybould said the Republican tax cuts passed late last year “make no sense,” because they focus too heavily on the wealthiest corporations and individuals. “I certainly support making sure that we offer tax incentives to our small businesses and certainly corporate tax cuts for our small businesses. They're the job creators in our state and in our country. That's where the focus should be on and our working families.”

On trade and tariffs, Raybould said “any action that risks a potential trade war is irresponsible.” She calls improvement to NAFTA one better way to deal with the trade deficit. “You do upgrades, you do amendments, because things change in 20 years, and technology that was used 20 years ago is certainly far different than the technology we use today. Those are type of amendments and improvements that need to be made, but not under the threat that you're going to toss the baby out with the bathwater.”

On abortion, Raybould said her faith tells her not to judge and “Washington politicians have no place telling Nebraska families how to live their lives when it comes to an unintended pregnancy."

She said medical marijuana “has been proven effective and could even help stem the reliance on prescription opioids.”

“I do support the Second Amendment right,” Raybould said, “but we can’t allow what’s going on in our country to continue. The horrific gun violence.” She said action on common sense gun safety measures is needed and that the previous assault weapons ban was “amazingly effective in reducing the number of incidents of gun violence.”

“I'm not sure what form it should take, but I know that looking at the whole classifications of assault weapons certainly should be part of the consideration,” she said.

Raybould said immigration reform is needed that enhances opportunities for more people to come to live and work in Nebraska, in part to help grow the workforce. That includes helping DACA recipients stay in the United States. “We need to find a pathway for citizenship for these amazing young people. In Nebraska, we have invested in them, we have educated them. They are talented, they're smart, they're capable. We certainly want them to stay in their state of Nebraska.

“I think we do need more southern border security,” Raybould added. “I'm not sure it should be in the form of a wall, which is a very expensive proposition. I think the government of Israel has been so proficient in finding solutions of using the best technology out there with monitoring systems and infrared sources. I think that might be a better spend of our taxpayers' dollars.”

Among the four Democratic Senate candidates in Nebraska, Raybould has the largest campaign operation, and even with a pledge to not accept money from corporate political action committees, she has by far raised the most money, more than $700,000 through the end of March. She also points out Nebraska has a history of electing Democratic businesspeople like Ben Nelson and Bob Kerrey to the U.S. Senate, and hopes the next comes from the grocery business.