Update: On Oct. 20th, 2017, Bluestem Energy Solutions, LLC asked to withdraw its application to build a gas-fired power plant in Beatrice, NE. The company said while it disagreed with the public power districts that objected to the project, "neither Bluestem nor Beatrice believes that the construction of the project can be accomplished on the necessary timeline given the likelihood of continued litigation." 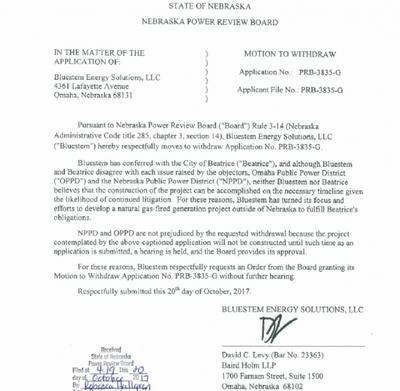 Nebraska has been known as the only all-public power state, where electricity is produced by publicly-owned utilities, not for profit. But that’s been changing, and a new proposal in Beatrice could change things.

Tobias Tempelmeyer pilots his car alongside a cornfield on the northern edge of Beatrice, and points to a place where something entirely new could be planted.

“So, the site would be up here to the north. This is the area where we’re looking at putting in the power plant,” Tempelmeyer said.

Tempelmeyer is city administrator for Beatrice, as well as general manager for its Board of Public Works. But the proposed power plant would actually be owned by a private company -- Bluestem Energy Solutions LLC, based in Omaha.

Bluestem owns other generating facilities in Nebraska, but they are wind-powered, under an exemption to public ownership for renewables carved out by the Nebraska Legislature. The proposed power plant in Beatrice would be powered by natural gas, and would sell its power to the city, under what appears to be the first such arrangement in the state.

But in filings with that board, NPPD termed the proposed project “unprecedented” and contrary to the public policy established by the Legislature. Both public power districts also argued the proposed plant was not needed and would amount to an unnecessary duplication of facilities.

John Hansen, president of the Nebraska Farmers Union and a supporter of public power, echoed those concerns.

“We think that that breaks new ground and that that would undermine the integrity of our unique public power system, which our organization helped create and continues to strongly support,” Hansen said.

A few years ago, Nebraska utilities joined the Southwest Power Pool, which oversees the wholesale power market in the central United States. Templemeyer says the effect on the energy market was like when the internet expanded retail choice.

“Before, I could buy it only from my ‘Main Street’ store, which was NPPD. SPP came along -- it was the internet. And now I could buy it anywhere on the market,” Tempelmeyer said. 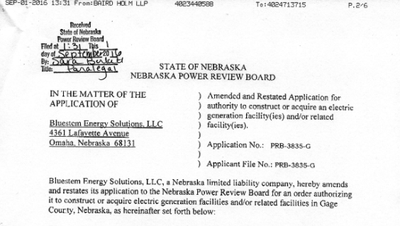 Beatrice has decided to discontinue buying energy from NPPD and buy it instead from Ohio-based American Electric Power, with the transition to be complete by 2021. But the story doesn’t end there. Beyond its day-to-day energy needs, Tempelmeyer said, SPP also requires Beatrice to have -- or contract for -- a certain amount of energy generating capacity. He compares buying energy to buying a certain amount of gas for a trip, while the capacity requirement is like having to have a certain sized gas tank.

That’s where the proposed Bluestem gas generating plant comes in. Beatrice would contract with Bluestem to give it the capacity it needs to have, guaranteed. Tempelmeyer said there are other advantages to having a plant in town.

“It pays property taxes. The other benefit to having it in your community is you could turn this power plant on that way your community would still have energy while the rest of the service area would not,” Tempelmeyer said.

Hansen pointed out NPPD already has a gas-fired power plant in Beatrice. But Tempelmeyer says it uses a different technology that can’t be turned on and off as quickly as the proposed plant, and would not be able to respond to changing demands in the SPP market, such as when the wind dies down.

There still remains a big question of how the proposed plant would fare under Nebraska’s eminent domain law. That’s been the ultimate enforcer of public power in the state – the threat that if a private plant were built, it could be taken over by a public power district. Tempelmeyer acknowledged the challenge, but referred questions about it to Bluestem. The company did not respond to calls seeking comment.

And then, there’s the bottom line question of how private competition with public power will affect consumers. Hansen said people shouldn’t undermine a system that’s worked well for the state.

“We already have a very efficient system. Our entire system is publicly owned. And its goal isn’t to maximize profits. It’s to efficiently provide dependable, low-cost service to Nebraskans. And our power rates as a state as a whole are very competitive,” he said. 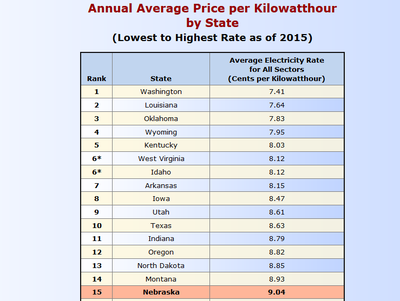 To compare Nebraska's electric rates to other states', click here.

Tempelmeyer said if things go according to plan, electric rates in Beatrice, which have gone up more than 10 percent in the last six years, will be flat for the next decade. And he doesn’t buy the argument that allowing private competition will undermine public power.

“You could make that argument. But at the same time you could argue that competition’s what’s needed to help keep prices low. You could argue that when public power was originally created it was because you had to get each farmstead electrified, and in private business it didn’t make sense to run a line that long to serve one customer,” Tempelmeyer said. “Are those days past us? I’m not one to make those decisions. And we’re just trying to do what’s best for our customers,” he added.

Those kind of questions, and future changes for electrical suppliers and consumers in Nebraska, could be at stake when the Power Review Board considers the proposed power plant in Beatrice on October 27.

Editor's Note: This story has been updated to reflect the withdrawal of the application by Bluestem Energy Solutions, LLC.