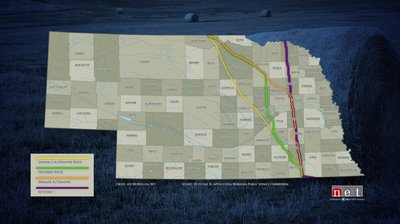 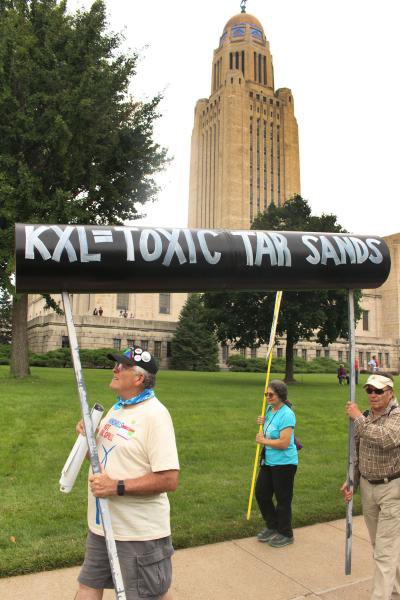 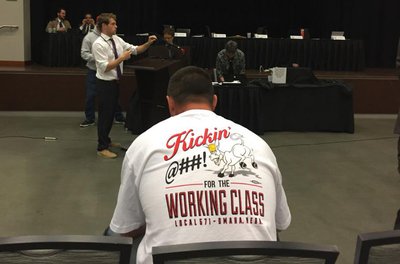 Member of Operating Engineers Local 571 prepares to testify at a public hearing in 2017. (Photos: Bill Kelly)

The announcement came from TC Energy (formerly TransCanada), the company behind the project.

Word of the presidential order got mixed reactions among Nebraskans, split between those who saw it as an economic benefit to the state and others who believed it could be an environmental disaster.

Among the Nebraska landowners who opposed the Keystone XL Pipeline, it was a day to celebrate.

"We hope that this put the final nail in the coffin," said Art Tanderup on his Antelope County farm outside of Neligh, Nebraska.

At one point, plans for the pipeline included a half-mile stretch across his land. The company altered the route after Native Americans raised concerns the project would disrupt land sacred to the Ponca Indian Nation.

Tanderup told NET News the ten-year fight to block the project took a psychological toll on him.

"It has been depressing at times," he said. "All of us value how important it is to protect the water and the environment, so we keep coming back and saying, 'no, you can't do this, and we're not going to stop until this thing's rejected."

His voice upbeat, he added, "and, you know, here we are today!"

Anticipating the Biden Administration's executive order, TC Energy released a statement immediately before the President's inauguration announcing it was suspending the pipeline's construction.

The company wrote it was "disappointed."

"The decision would overturn an unprecedented, comprehensive regulatory process that …repeatedly concluded the pipeline would transport much-needed energy in an environmentally responsible way."

The fate of the project swung wildly over the years in response to changing political tides and a range of legal challenges in federal and state courts.

President Barak Obama blocked the federal permits. Shortly after President Donald Trump took over the White House, he reversed the decision, determining the pipeline was safe and vital for American energy independence. President Biden switched it back in one of a series of actions to respond to climate change concerns.

The KXL pipeline would have been one of the most labor-intensive construction projects in the state's history. Some compared it in scope to the Interstate Highway system that crossed the state in the 1960s.

The statement from TC Energy noted the loss of construction jobs that would have assisted in constructing 280 miles of pipe below under Nebraska soil.

Equipment yards had been set up near the towns of Dorchester and Daykin. Construction crews had begun site preparation at the pipeline terminal at Steel City, Nebraska, at the Kansas border.

Losing the project is a blow to labor unions who lobbied for the project on behalf of the members it would put to work.

"It's just crazy to think of what the state and what the people in the state would be missing out on," said T.J. Dick, operations manager for Operating Engineers Local 571. He said members of his union would have operated the heavy machinery digging the pipeline's trenches.

"All the people that have planned to work on this job and wanted to work on this project for ten years, we've been fighting this," Dick said. "It's not good. This is people's livelihood, and how they take care of their families."

Nebraska Governor Pete Ricketts released a statement criticizing the executive order, stating, "failure to construct the pipeline would mean more dependence on overseas energy sources as well as fewer jobs and less property tax relief for Nebraskans. This is a project that would greatly benefit not just Nebraska but also our whole country, and it is our hope that TC Energy presses forward.”

The future of the project remains hazy.

In its statement, TC Energy said it would "review the decision, and consider its options," but added that even without the Keystone XL Pipeline, the company was financially stable and would be making money on its other energy projects.

How to Talk About Climate Change in Rural America? Don’t Say Those Words
Ricketts, Kleeb react to Trump; governor defends cuts to courts
5 Things You Must Know About the XL Pipeline Lawsuit