A jury has convicted Aubrey Trail of murdering Sydney Loofe. The 52-year-old Wilber man could now face the death penalty.

After a month of sometimes gruesome and bizarre testimony, the jury faced a decision: whether Loofe's death was planned or a horrible accident.

On Thursday morning the jury returns to hear the State of Nebraska make the case that this case of murder is worthy of receiving the death penalty. 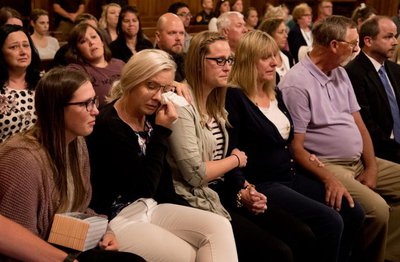 Family and friends of Sydney Loofe react to the verdict. 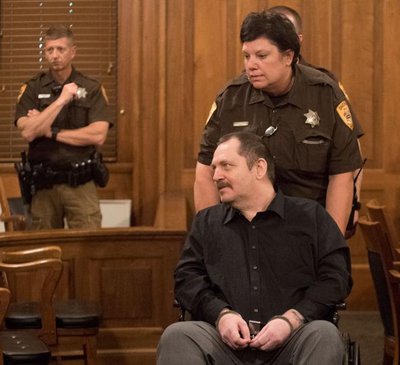 Aubrey Trail leaves court after hearing he is guilty of murder. 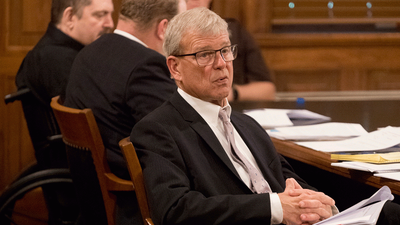 Defense attorney Joe Murray listens as case turned over to the jury. 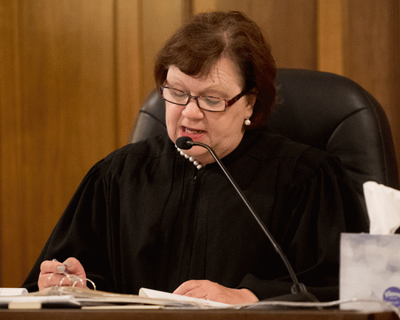 The verdict came at just after 7 o’clock last night. The wheel-chair bound Aubrey Trail, brought back to court just three and a half hours after his case was given to the jury. The foreman handed District Court Clerk Amber Mulbery the unanimous decision, who read aloud to the court. “Guilty of murder in the first degree by purposefully and with deliberate and premeditated malice killing Sydney Loofe."

Not a sound came from Trail or the audience, beyond the quiet sobbing of family and friends.

The quick verdict may be tied to something Prosecutor Michael Guinan said during his closing statements.

“We all watched as, right before our eyes, as Aubrey Trail dismembered his own story.”

The jury may have given substantial weight to Trails own admissions and conflicting confessions.

In his closing statement to the jury, Guinan made the case that Sydney Loofe had been recruited for murder — something for the pleasure of Aubrey Trail and his girlfriend Baily Boswell.

Guinan says Loofe could not have known the couple was already preparing for her death and dismemberment at their apartment in Wilber when Boswell picked Loofe up November 15, 2017.

Prosecutors theorize Loofe never knew Trail would be at the apartment, waiting in a tent a created with tarps to assure there would be little evidence of a murder.

“She fought. She did not survive,” Guinan said of Loofe. “I don’t know which was holding her hands and which was strangling her. Strangled her. Face to face. Eye to eye. Squeezed the life out of her.”

Trail looked on impassively throughout the presentation of the case against him. His defense attorney Joe Murray spent much of his closing argument reviewing evidence the defense does not dispute.

The defense sought to find “reasonable doubt,” a legal standard the jury must consider. A specific example: the experts who testified it could NOT be proven whether the choking was an accident or a murder, nor which of the two immobilized Loofe’s arms and who actually strangled her.

“As Mr. Guinan said in his closing, I can’t say who held her down and whose hands were around her throat,” Murray said with growing passion. “If he can’t tell you how are you to determine it? The evidence does not show it. That’s reasonable doubt.”

Murray repeated something he said to the jury when the trial opened a month ago. He said of Aubrey Trail: “you don’t like him, and I don’t like him, but you have to presume he is innocent.”

Trail was also found guilty of criminal conspiracy to commit murder. Trail and his girlfriend, Bailey Boswell, were both charged with first-degree murder.

Loofe’s body parts were found in 14 pieces in ditches along a state highway, weeks after her November 2017 disappearance. Boswell is awaiting trial.

On Thursday, a second phase of the trial will begin to determine if Trail’s action qualify for the death penalty.

(Editor's Note: This story was updated with additional information.)