Pregnancy on the Farm Comes With Its Own Set of Risks

Note: This story was originally published on Oct. 9, 2019. It has been updated with a video discussion from Speaking of Nebraska.

In the fall, livestock veterinarian Dr. Bailey Lammers is often busy with vaccinating calves and helping wean them from their mothers.

A herd of auburn cattle greeted her at the barn gate during one of her house calls in northeastern Nebraska, peering from behind the dirt-caked bars. Lammers and her technician Sadie Kalin pulled equipment from tackleboxes in the back of Lammers’ truck.

“These ones are a little spicy,” she said as she secured a cow in a headlock gate. “They get a little more ramped-up when they’re by themselves.” 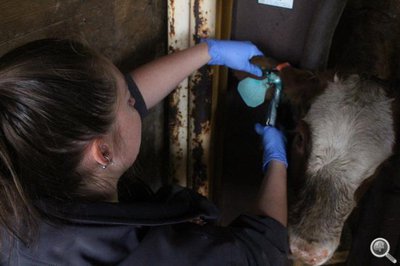 Sadie Kalin marks a heifer in northeastern Nebraska before the animal is vaccinated for Brucellosis. (Photo by Christina Stella, NET News)

When Lammers decided to become a mother herself, she wasn’t sure how the pregnancy would impact her work life or how easily her doctor would be able to discuss potential hazards.

“That’s probably why I waited to have a child,” she said.

Dwindling access to reproductive care has been an issue in rural communities for years: Since 2010, 134 rural hospitals in the U.S. have shut down their obstetrics units, and 18 have closed entirely. That left less than half of rural hospitals providing reproductive care. In Nebraska, about half of counties have no prenatal healthcare providers, and on average, there are 11 OBGYNS for every 100,000 patients.

The closures are coming at a time when at least one woman now works at more than half of America’s farms — a 27% increase according to the U.S. Department of Agriculture’s most recent census (which didn’t ask whether people were in operations vs. in the field). The category also doesn’t include people like Lammers, who work on the front lines of agriculture but aren’t technically producers.

Advocates say women are more comfortable asserting their roles in farm operations than ever, which is why they believe health care providers need to make sure women have access to safety information when it comes to things like pesticides and working with livestock.

“Our agriculture is a 24/7-type job. Our recreational life, our work life, our family life is all woven into agriculture. And so it's important that these females understand their risks,” said Linda Emmanuel, a community health nurse with Agrisafe. The nonprofit offers safety and health training services to people working in agriculture. She’s also Lammers’ aunt.

Conversations about the health risks of working with agricultural chemicals are gaining momentum. More producers than ever are using them in production, but some studies have linked certain chemical exposures with lowered fertility among women, birth defects and miscarriage.

But Emmanuel said exposures are hard to fully understand, because many studies use animal subjects instead of people — which is common due to ethical research concerns — and can’t promise it’ll be applicable for humans.

“Having that solid link is still difficult,” she said.

Working with livestock while pregnant can also be a concern. Some hormones for livestock can trigger abortions, so getting accidentally stuck with a needle can be disastrous. Plus, animals carry bacteria and zoonotic illnesses that can be unsafe for human mothers and their fetuses.

When Lammers was pregnant, she got a call about a heifer that had died after aborting one of her calves. She needed to perform an autopsy on the cow to diagnose the problem, which she did, though she was nervous.

“And I accidentally had nicked part of its stomach, and the stomach, kind of, (for) lack of a better word, blew up in my face,” Lammers said. “And so I was exposed to whatever was in there.”

A sample tested positive for Campylobacter, a bacteria commonly responsible for food poisoning. It’s also known to cause pregnancy complications, and even trigger miscarriages.

Lammers told her OB-GYN what happened. But her doctor didn’t know whether she was in danger, because her doctor wasn’t trained for livestock exposure.

“It's not a really common thing to say, ‘Hey, I blew up a rumen and have cow all over my face, here’s the bacteria it has. What do you think?’ I mean, it's not something they deal with every day,” Lammers said.

But Lammers and other women in agriculture are a minority within a minority workforce. She was happy to have any doctor to call. Lammers and Kalin drove to South Dakota to see an OB-GYN. When it became clear to Lammers there was nobody nearby to give a second opinion, she called her aunt.

“We were able to have access to an epidemiologist at the University of Minnesota, who is a veterinarian, as well as works in the public health realm,” Emmanuel said.

In the end, Lammers was OK, but Emmanuel said the Agrisafe network of experts was crucial for getting evidence-based reassurance.

The next step for agriculture workers and health care professionals needs to be an institutional one, Emmanuel said, baking teaching safety practices into doctors’ offices and degree programs.

“I questioned Bailey about her education when she was in veterinary school,” Emmanuel said. “I said, ‘Did they talk to you about the exposures and how to protect yourself?’ She said, ‘Not really.’”

“[But] I wish they would just turn to us, turn to those centers, turn to research to help them understand,” she added.

Lammers is less nervous should she decide to get pregnant again. She said she plans to wear more protective equipment, and ask for help when she needs it, instead of pushing through every risky situation.

“I mean, I might look a little silly, but I'll just explain what happened the last time,” she said. “I think they'll be fine,”

For her, self-advocating is part of normalizing the next generation of women working in the field: “We can stay safe.”