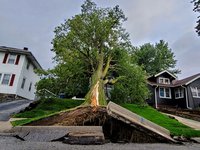 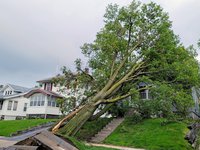 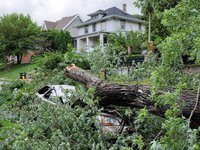 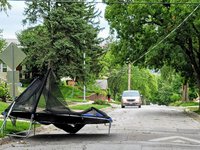 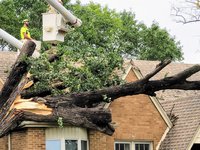 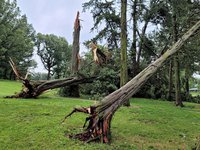 Clean-up is underway after rain and hail hit western and central Nebraska and rain with hurricane-force winds impacted the eastern part of the state over the weekend.

The storms slammed areas of Omaha and Lincoln early Saturday morning, knocking down trees and power lines and damaging homes and businesses. Jodi Baker with Omaha Public Power District said the power outage numbers in the OPPD service area have been historic.

“At our peak of this event early Saturday morning, we had 188,000 customers without power and that’s the highest number ever for any weather-related outage event in OPPD history,” she said.

Slightly more than 30,000 OPPD customers are still without power, as of Monday afternoon.

Baker says strong winds and lightning played a role in the outages.

“Lightning was also an issue. It hit some transformers and caused some outages, but primarily what we’ve been dealing with is that tree-related damage to our system,” she said. “That’s been the big driver, although lightning is always an issue when storms pop up like this, just not as big of an issue as the trees.”

“We started taking records in 1935 for Omaha / Eppley (Airfield) and we tied the fastest wind gust ever recorded there,” he said. “That’s 80-some years and there’s never been a faster wind speed than what we had on Friday night.”

Lincoln Forestry has responded to about 100 tree-related calls since early Saturday morning. Some trees in Omaha were completely up-rooted, even ripping out concrete from the road.