Pope's climate expert tells Nebraska audience: It's an issue in the laps of faith leaders 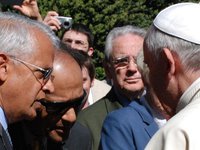 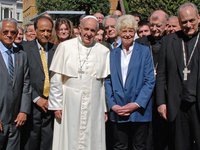 Did you know Pope Francis has a scientist consulting him on issues related to climate change? Neither did we.

Dr. Veerabhadran "Ram" Ramanathan, an atmospheric and climate scientist, recently spoke to students at Creighton University. In an interview with Bill Kelly of NET News he talked about his post with the Vatican, why the pope made climate an ethical and spiritual issue, and why Nebraska needs to pay attention.

V. Ramanathan: I'm a distinguished professor at the University of California, San Diego. I started working on this topic of climate change, at least for the last 40 years. I joined the Vatican as part of the Pontifical Academy of Science. They have 80 world renowned experts invited to the academy. I was invited, invited to join the Pontifical Academy of Science in 2004 by then-Pope John Paul II.

You are elected to the Academy not because of your religious beliefs, not because of your cultural or national origin, it's purely based on scientific merit. You're just chosen for your science and I found that to be remarkable. I don't think there is any panel equal to that in any religion that I know of having a scientific body exerting its free will.

Bill Kelly, NET News: As a member of the Vatican's Pontifical Academy of Sciences, you're in the service of Pope Francis. I'm betting most people still ask what is the service that you offer the pope.

Ramanathan: The Academy meets once every two years but then individual members organize meetings on special topics, there are at least two such meetings each year. Based on that, we then brief the pope what is the most recent scientific thought on any particular topic. We had meetings on creationism, we had meetings on fundamental areas of physics, and of course, climate change. Sometimes he comes to our meetings himself.

Kelly: Did Pope Francis need convincing that there's appropriate advocacy to be done in the area of climate change?

Ramanathan: I don't know the answer to that question. I personally don't think so. But I can just tell you about one event. I planned to organize a meeting under Pope Benedict on melting glaciers. By the time we got to organize the meeting in 2014 (Pope Benedict) stepped down and Pope Francis stepped in.

At the end of it, I was asked to brief the pope. Unfortunately that day he had only two minutes. So, I mentioned to him just on one thing, which is ‘what's going to be the plight of the poor?’ Climate change was caused by pollutants from the wealthiest billion around the world. But the poorest three billion who have not even discovered fossil fuels. They were still using primitive energy. I told him these three billion are going to suffer the worst consequences. He seems to have immediately got that (message). A year later he spoke about climate change extensively. In fact, there was a famous statement he made. “If you hurt nature, nature will hurt you back.”

When he released encyclical, I consider that the most influential document on us as human beings protecting nature. Scientifically it's very accurate. I challenge any climate scientist to look at Laudato Si, his encyclical, and find anything there which he or she doesn't agree with. It's stuck to the rigors of the science. Perhaps that may be because of the influence of the Pontifical Academy of Science.

There's one statement says, "Cry of the earth should be heard with the cry of the poor." That's how he synthesized all of climate change into one sentence.

Past and projected temperature changes in Nebraska resulting from carbon emissions. (Chart: NOAA)

CLICK HERE to read the federal NOAA summary on the impact of climate change on Nebraska.

Kelly: So where does the science and the spirituality intersect with this issue?

Ramanathan: This being my mantra, the thing I'm pushing last five years, more so after my interaction with Pope Francis, is that in the context of climate change we have reached an important fork on the road. Which is, if you ignore the science and go one way, my own science tells me I foresee destruction. Suffering on mass scales. Now we are talking about three quarters of the planet getting impacted if you let these pollutant emissions go unchecked for the next 30 years.

So where does spirituality fit in? Because of our inaction to stop this climate change, it has become a huge moral, ethical issue. Three billion (people) who have nothing to do with this (the cause of climate change) are going to suffer the worse consequences. The change, which is already happening, is going to get worse. They're irreversible on our time scales. Once you have the sea level rise 10, 15 feet, it's not going to go back for another several thousand years. So generations of our children, grandchildren, and their children, they're going to suffer the worse impacts of our actions. It's the huge equity issue, which puts it right in the laps of faith leaders.

Kelly: You're in the center of the United States and you have a faith community here often with roots in Christianity. They also can be traditionally politically conservative. This is where some of those ardent skeptics of climate change can be found these days, too. What would your message be to one of those congregations in Nebraska?

The fundamental challenge I face in talking with churches and with evangelical groups which I have done, is to separate the politics from the science of climate change

Kelly: If part of the tenant is science comes in opposition to biblical teaching, that's a huge hurdle for you to overcome. That their faith is in conflict with your science.

Kelly: There is a certain band of Christian belief that says this is just God's will and this is the course that God's intending. Your response.

Ramanathan: That's very difficult for me to understand because when the testaments were written, the whole issue of we damaging the planet beyond recognition was not there.

If God created us and God created our ecosystem, how can one part of that system destroy the other part? If you think of both as creation, then the issue of this as God's will, it's very difficult to justify.

Kelly: Nebraska is a state built on generations of farm families and a strong agricultural economy. Weather and climate, long range climate are part of people's lives and a big chunk of this state. What is the responsibility of American agriculture in addressing this issue?

Ramanathan: The issue that concerns me is how are (rural farmers) going to be impacted by this climate change? What we are predicting, the extreme weather, is going to get a lot worse because we are creating new climate. As the American Meteorological Society said, we are expecting huge heat waves exceeding 130 degrees Fahrenheit. Then we're predicting huge droughts. Not the drought that comes one or two or three years and go away. Lasting for ten years.

We need to work with the farmers in Midwest and the Great Plains region, to advise them what to expect. How do they adjust their agriculture practices?

How can they contribute? I think the main thing is conserve water use. It's not going to plentiful. Prevent greenhouse gases escaping from your farm, for example. The manure is a major source of greenhouse gas escaping. What can they do about? Very simple. Put them in bio-digesters, so the manure becomes biogas, which they can use for power. There are a lot of low hanging fruits, win-win solutions the farmers can adapt.

Kelly: When you look at this data, are there times you are already convinced that it's too late?

Ramanathan: Not at all. If it was too late, I would never be giving this message to the public. Then I'm doing a great disservice, right? Fortunately there's still time. Climate change is going to get worse, but at least 50% worse than when we were experiencing but it's not going to be catastrophic if they start cutting down the emissions. Starting today. Not 20 years from now. Not 15 years from now. But today. We have about 15 years from now to bending, what I call bending the curve. If we all start and unite, just like America unified before second World War, we just need that repeated.

Kelly: If the United States does do a better job of its preparation but there are still global effects on food supply in these other nations, even if America sustains itself, what are the impacts from food supply shortages back on this country?

Ramanathan: Let's assume America can deal with this. That's exactly what I thought until I saw what's happening to California last five years. I thought of California as the super technology, super rich amongst the U.S. This whole drought and fire of last five years has brought us to our knees. I'm not at all clear that if the changes happen on the scale many of us would do well, but a lot of the population are going to get hurt.

Let's assume that America can cope with this. Yet the burden on this is going to be huge. Just focusing on the three billion poorest population, they earn $1 a day, they depend on the next day's paycheck. Throw a five-year drought on them and I see how the world is unable to deal with one million Syrian refugees. There's no governing system. I'm talking about hundreds of millions. Fatalities, displacement, migration. It really worries me, concerns me.

Kelly: Last question. You're a little boy growing up in India. Other little boys thought they were going to be an astronaut or an actor or a cricket player. When you were growing up did you say, "I'm going to grow up to be an advisor to the pope?"

Ramanathan: It’s funny you ask. I grew up in small towns in India, spent most of my time in villages of my grandfathers. I had only one dream, when I came to America, not to pursue science. Definitely not climate change science. Not to pursue higher studies. I wanted to own a Chevy Impala. And live the American good life.

Kelly: Have you gotten it yet?

Ramanathan: It’s my fate I worked on climate change. I could never buy that Impala. If Chevy makes an electric Impala with batteries, I have solar in my rooftop, first thing I would do is buy that Impala.

LES Board Sets Goal to Reach Net-Zero Carbon Emissions by 2040
Fortenberry, Bolz Agree Climate Change Needs to Be Addressed, but Not How
UNL Students Interested in Moving on From Balloons