Ponca casino on Nebraska's border may open soon despite lawsuit 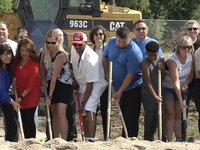 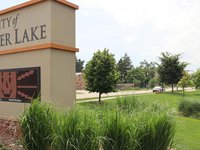 Preparations for a new tribal casino a few hundred feet outside the Omaha city limits are underway after years of delays and legal battles. 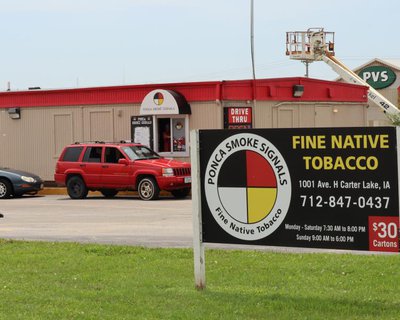 A discount tobacco story sits on the land being prepared for the casino project. (Photo by Bill Kelly, NET News) 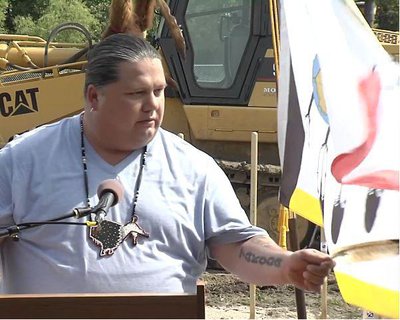 Larry Wright, chair of the Ponca Tribe of Nebraska, speaks at the groundbreaking. 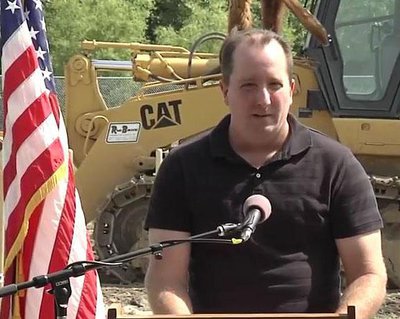 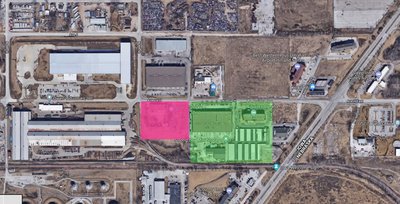 In Carter Lake, Iowa The Ponca Tribe of Nebraska is preparing the site for construction and finalizing agreements to reimburse the city for revenues lost by making the land tribal territory.

Bulldozers are preparing the land even as an effort by Iowa and Nebraska to block the casino is under review by a federal judge. Battles over its location stretch back more than a decade.

The push to proceed with construction began in June when the tribe hosted a low-key groundbreaking ceremony on four acres of land tucked amongst the town’s industrial properties.

Facing a small, sunlit crowd, with a bulldozer as a backdrop, Dwight Howe, the Ponca Tribe’s cultural affairs director offered a prayer in the Ponca’s native language.

“We want to be able to bring something to our nation, so we can truly be self-determined, truly be sovereign,” Howe explained in English to the audience.

Local media were not invited to the groundbreaking ceremony, but it can be seen on the tribe’s YouTube channel.

The ceremonial spades dug into soil just a few hundred feet from the Omaha city line, where casino gaming is forbidden. The lot is currently occupied by a discount tobacco story managed by the tribe. It’s sandwiched between a steel fabricating plant and a trucking company.

“The location is such that it is unique,” said Larry Wright, chair of the Ponca Tribe of Nebraska. “As we have said to everybody, we want to build positive relationships that are mutually beneficial.”

The tribe would not show NET News the architect drawings for the “phase one” casino, a stand-alone building housing up to 2,000 slot machines.

Wright said it would be “a first-rate facility.”

“We want to drive the user experience and provide first class hospitality,” he said.

Plans for a second phase are already in place, financed with proceeds from the first venture and loans from a large, Minnesota-based tribal gaming operation.

The tribe has told Carter Lake officials it will include a seven-story hotel (which may legally be placed on Nebraska land) linked to a more elaborate casino featuring table games like black jack and craps, similar to the large gaming resorts across the Missouri River in Council Bluffs.

Additional land adjacent to the phase one project has reportedly been purchased.

“The impact from the economic revenue we look to generate here was just too much to walk away from,” Wright said.

City leaders in Carter Lake, with just 3,500 residents and no more land on which to expand, felt it couldn’t say no to the casino. Mayor Ron Cumberledge did not respond to emails and phone messages from NET News, but in public appearances makes clear he is an enthusiastic booster. Speaking at the groundbreaking, he told the audience “this project brings new life to land that’s never seen development in my lifetime.”

City council member Pat Paterson does not approve of gambling, but voted to support the casino. 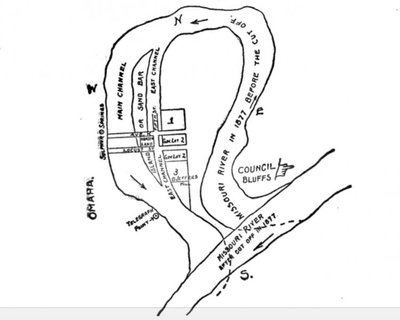 The geographical anomaly that is Carter Lake, Iowa sits on the west side of the Missouri River; mushroom shaped, landlocked, and surrounded by bordering Nebraska.

In 1877 it was cut off from Iowa by flood waters. Real estate developers and the criminal element both had designs on what they viewed as free land. The state of Iowa went to court arguing it wasn’t up to nature to determine if Nebraska had new territory. Ultimately, the U.S. Supreme Court agreed. The hand drawn map above was included in one of the court filings at the time.

Anyone traveling to or from Omaha’s Eppley Airfield from the south briefly cross into Iowa and back again. No one gave the tiny town much notice until there were plans for a casino. Legal in Iowa. Banned in Nebraska.

The article below, from the Omaha Daily Bee in 1892, gives you an idea of how Nebraska viewed the "orphaned" river town, known at one point as "Cut-Off Island." 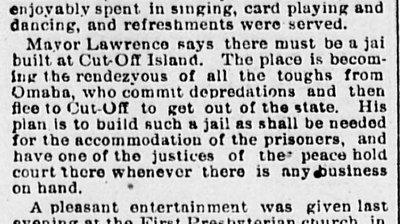 “The Ponca Tribe can build its casino on its sovereign land with or without the permission of Carter Lake,” Paterson said.

Since the city is unable to tax the Ponca Tribe’s designated trust land, city officials negotiated payments to be made in lieu of property taxes.

That privately negotiated contract was scheduled to be discussed at the council’s July meeting.

The arrangement, in Paterson’s view, made sense for the city in the hopes they could “try to come to a mutual benefit with both sides, instead of entering into the fight.”

The fight unfolded in U.S. Federal District Court. Filed in Iowa’s southern district, the original complaint was filed by the city of Council Bluffs and the state of Iowa.

Casino gambling has been legal in the state since 1989. Three substantial casinos operate in Council Bluffs.

A change in the tribal status of the Carter Lake land would result in the Ponca’s losing protections that make setting up a casino possible.

The lawsuit, filed against the federal agencies that approved the use of the land for gambling, claims the Ponca Tribe misrepresented its intentions when asking for federal government approval designating four acres of land as Ponca territory after it was reestablished as a legitimate, sovereign tribe.

The National Indian Gaming Commission (NIGC) regulates the industry for the federal government. It’s board twice approved the Ponca Tribe’s land acquisition. Secretary of the Interior Ryan Zinke is defending the decision made and upheld by previous administrations.

In May, the state of Nebraska joined as a party to the complaint.

Nebraska Attorney General Doug Peterson says he has “a lot of concern” that if the land is deemed tribal territory “the Ponca Tribe can go around and buy different properties” around Nebraska opening the possibility “those additional properties can be used for gambling purposes.”

This is the third time the case has been in the federal courts in ten years.

After the Ponca nation came back to life 25 years ago, the U.S. government allowed the tribe to reestablish lands in northeast Nebraska. Later, the federal government granted permission to add a five-acre parcel of trust land in Carter Lake for the purpose of setting up a medical clinic for the Native American community.

In the lawsuit Nebraska claims the Ponca abused the intent of how trust lands are intended to benefit the reestablished tribe.

Peterson maintains the tribe “in order to get a spirit of cooperation from the state of Iowa made representations it would be a medical clinic.” Within two years the tribe announced it was changing its plans and, Peterson says, “all of a sudden it was going to become a gaming facility.”

In 2007 the NIGC approved the Ponca’s request to use their Carter Lake trust land for a casino. The U.S. Department of Interior also signed off on the additions to tribal land.

After Iowa challenged the decision in federal court, a judge ruled NIGC to review its justification. After a more detailed accounting was filed, Iowa returned to court, but judges overruled the state and local governments, siding with gaming officials and the tribe.

Motives for the lawsuit go beyond legal technicalities, in the view of Ponca chair Wright.

“We think we are being unfairly scrutinized,” he told NET News. “This issue with Nebraska, and I don’t think anyone can argue, is largely because at the political level, they don’t want gaming.”

Peterson does not disagree, speaking often about the detrimental effects of gambling addiction, crime, and human trafficking.

“This is like a natural disaster that’s going to happen in our community and people don’t realize it,” Gregory said during an interview in her office. “The proximity of this is devastating to us.”

The potential for problems is even more acute, in her view, because the Open Door complex, providing service to the homeless and low income clients, is within walking distance of the shelter.

She lays out what she believes is a realistic scenario of clients who, tempted by a nearby casino, “try and hit the big one because it can get me out of this situation.”

That survival instinct is powerful, according to Gregory, adding she does not doubt the people served by the mission “are very smart, they are very creative, and unfortunately very vulnerable.”

He also dismisses fears his smaller gambling operation will “be a large factor” in contributing to community problems “just because we are the new kid on the block.”

There are other factors challenging the Ponca project, even as the site is still being prepared. Studies done by the State of Iowa show “an increasingly competitive market” in which multiple casinos in close proximity compete for gambling dollars, just as the over-all customer base is shrinking. Twelve out of the 19 commercial casinos in Iowa watched their revenue fall in fiscal year 2017.

It’s taken a long time to get here.

When Wright spoke at the groundbreaking, he focused on the future. “The next 27, 50, 100 years will be determined by this project here today.”

With the lawsuit still in court, it seemed the mere fact the tribe decided to proceed with construction was a sign of the tribe’s confidence.

“This isn’t going to solve all of our problems,” Wright said, “but it will help us take the next steps.”

Depending on how soon construction is complete the slot machines will have already collected tens of thousands of dollars before the case leaves the courtroom.