Sen. Steve Lathrop, sponsor of the police reform bill, said it grew out of the death of George Floyd at the hands of Minneapolis police last year, and the demonstrations that followed. Wednesday, Lathrop referred to hearings the Judiciary Committee he chairs held at the time to listen to people’s concerns.

“When we had those two days of hearings, we had people lined up outside of the Scott Center at UNO, and we had ‘em lined up outside NET in Lincoln, for the chance to talk to us for a couple of minutes. And now, it’s six months down the road and the rooms aren’t as full as they used to be, but we made a promise and there was a promise in listening to those people that we would do something that’s responsive,” Lathrop said.

Capt. Steve Cerveny of the Omaha Police Department supported the bill, listing some of its features.

“It will assist efforts to improve police, including a state registry of decertified officers, required background investigations of certified officers applying from other states, important de-escalation and implicit bias training, chokehold prohibitions, use of force and duty to intervene policies, increased realistic simulator training, requirements for complaint and misconduct investigations. It mandates psychological investigations prior to hiring officers, it provides for accreditation standards, and more,” Cerveny said.

Cerveny was one of several law enforcement officials supporting the bill, something remarked on by another supporter, Spike Eickholt of ACLU Nebraska, which frequently criticizes law enforcement misconduct.

“It’s a little bit – not uncomfortable, but a little bit awkward, to follow all these officers to praise these bills but I think that – maybe unusual is a better word – but I think when we do have common ground, we should recognize that,” Eickholt said.

“In many rural areas of Nebraska, law enforcement budgets are limited, and LB51’s requirement will significantly increase expenses,” Stukenholtz said.

Also Wednesday, the Legislature’s Executive Board heard Sen. Tom Brewer’s proposal to delay and study construction of the so-called R-Project, a high voltage electric transmission line through the Sandhills. The Nebraska Public Power District says the line is needed to improve reliability and allow for possible wind power development; critics say building the line would harm the fragile landscape and ruin unspoiled views. Brewer said he objects to the projected route of the line.

“It is needed for load balancing. I don’t have a problem with being able to balance the load or to provide redundancy. What I’m saying is, we have seen them (NPPD) pick the most dangerous, destructive route that they could pick, for their convenience,” Brewer said.

Brewer said the line could be built on a more southerly route that avoids the Sandhills. 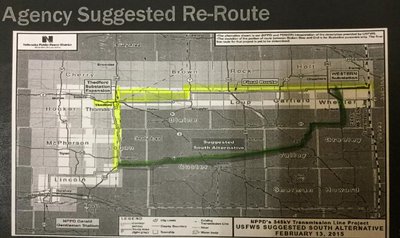 This is NPPD's interpretation of an alternative route (in dark green) suggested by the U.S. Fish and Wildlife Service. Bright green is NPPD's proposed route.

“The summer of 2012 was a very hot, dry summer, and we actually had an issue that summer where we had to interrupt people’s loads in north central Nebraska. We had to shut the lights off in the middle of the night, not because we didn’t have enough generation, but because we didn’t have enough transmission capability to move the energy into north central Nebraska. So that’s the primary driver for this project,” Kent said.

About five times as many people testified or wrote in agreement with Brewer’s opposition to the line route than those who expressed support for that route. On the other hand, Kent said NPPD has acquired 81 percent of the easements it needs for the project.

“It seems everyone in the state hates the idea of having to change their clocks twice a year, and I really do mean everyone. The feedback my office and others have gotten over this has been overwhelming,” Briese said.

Briese said sticking with later daylight hours would be good for business and also people’s health.

“A study by the University of Michigan, the University of Colorado, and the U.S. Department of Veteran’s Affairs in 2014 found a 24 percent increase in heart attacks on the Monday following the time change,” he said.

That’s true, although the same study found a 21 percent reduction on the Tuesday following the spring time change, and no overall change for the week. However, Briese said other studies did find increases.

No one spoke against the proposal at the hearing, but in written testimony the Nebraska Association of Broadcasters, to which NET belongs, said a patchwork approach among the states would be disruptive to stations whose markets stretch across state lines.

Briese’s bill says it wouldn’t go into effect until the federal government gives permission and at least three neighboring states have adopted it as well.

“I think I would really enjoy this because we’d be one hour closer to lunch,” Lowe said, to hearty laughter.