Poetry lets prisoners get outside the walls

Writer’s Block is a non-profit program that takes poetry into unlikely places. In several prisons across Nebraska, it’s helping inmates find their voice and even escape the prison walls for a few minutes.

It’s getting dark at the Omaha Correctional Center, a minimum- to medium-security state prison not far from Eppley Airfield. The prisoners, wearing beige uniforms, are gathered in a large, open courtyard talking in groups and milling about. Most are within five years of release. Some have longer sentences for more serious crimes but have been moved to OCC on good behavior.

It can be an intimidating place. Especially if you’ve never been to a prison before. But once we’re inside, seated in a circle and getting ready for a workshop, it feels like any other building. 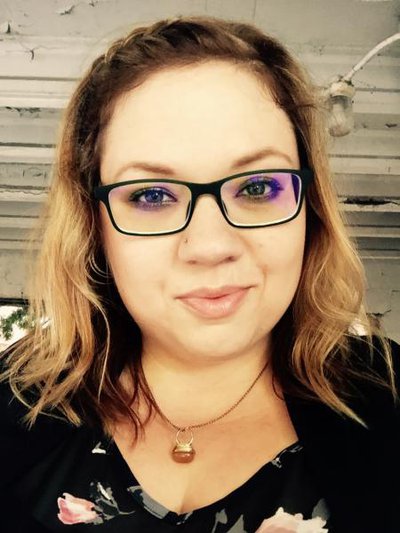 Emily Borgmann is a teaching artist for Nebraska Writers Collective.

“I’m Emily if you haven’t met me before,” says Emily Borgmann, addressing the group. Borgmann is a teaching artist for the Nebraska Writers Collective, and she is leading about a dozen men in a poetry exercise, encouraging them all to make a go of putting their thoughts to paper.

“Don’t limit yourself what you think poetry is,” Borgmann tells them. “Poetry is whatever you write on the page. It’s just a container.”

First, she gets the men to write down a list of 10 nouns, followed by a list of 10 adjectives. Then she asks them to link each noun to an adjective on the list to see what kind of creative combinations they come up with.

Poetry might seem a steep assignment, but Borgmann says it’s an open-ended medium that can encourage exploration. “Because people say I don’t know what poetry is,” she says, “instead of feeling locked out of it, it sort of means well I’m just going to throw up my hands and do it then because who knows how to write poetry.”

Creative writing offers a means to write about anything, Borgmann says. And through that, the men can work through emotional vulnerability and even trauma.

After the exercise, the writers share their work. A young man, Zach, volunteers to go first.

Sharp stay keys in dark, quiet entrances / The funny feeling suppressed by colorful minds / Escape while daydreaming of being free to enjoy sunny Nebraska summers / Razor wire nightmares becoming blockades to happiness / Feeling like nothing but bubblegum beneath a shoe / Whenever I mention happiness, I’m speaking of my mother and sister, and you

Zach’s reading is applauded by the group, and an older man named Will volunteers to go next.

The writers keep going around the circle. Most participate and share their work. Some have written about feeling condemned, some about missing time with family, and others about happiness they remember at home. A burly man named Curtis, who wrote about finding himself in his poem, says writing has helped him purge pent-up feelings.

“I never in a million years thought that writing my thoughts down would make me feel a million times better than any drink or drug,” Curtis says. “Because it’s there, it’s gone, you have the choice to burn it, crumple it up. It’s done.”

Zach says what he has enjoyed most about the writer’s workshops is the volunteers who give their time to help them tap into their creative sides. “A lot of us don’t do a lot of that on our own,” he says. “So just having this every other week to help us tap into our creativeness, it helps you get outside the walls for a while.”

Damon, who read a poem about awaiting judgment, says he has written for many years and spent a five-year window in prison completing a book. “What I like about writing especially is it can take me places,” he says. “Anywhere I want to go, anywhere in this universe that I plan on going to or want to go, I’m free to go there, nothing can stop me.”

The workshop ends and we gather our things. The men thank the volunteers profusely for sharing their time. Borgmann, who holds similar workshops in a variety of places, including middle and high schools, says the men in this prison are some of the most polite and respectful she’s met. “I don’t think any of us haven’t made a mistake in our lives,” she says “So I don’t think I’m any different from the writers that we work with, and it’s a privilege to get to work with them.”

The men file out – some tucking their scraps of paper into their pockets: a little reminder when they get back to their cells of what it felt like to be free.