Pandemic Is the Only Thing That Can Slow This Piano Man

The ongoing coronavirus pandemic has changed life for all of us. For one York, Nebraska senior citizen, it’s taken away his ability to perform before his favorite crowd. NET News followed him before long-term care facilities were forced to close their doors to visitors due to the virus.

It’s lunchtime on a Friday at the Mahoney House assisted living home in York. Chicken fried steak is on the menu. As usual, there’s also entertainment, catering to those with a taste for some good old-fashioned music. 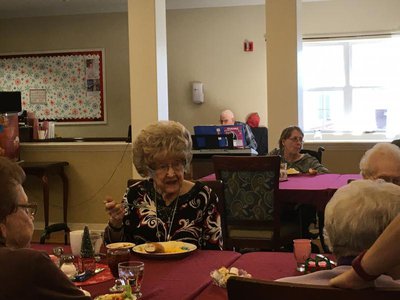 While residents at the Mahoney House in York, Nebraska eat lunch, Art Fredrickson entertains them by playing and singing some classic songs. (Photo by Dennis Kellogg, NET News)

Art Fredrickson is at the piano keyboard. That’s where he is every Friday – at least until a pandemic got in the way. Art is 94-years-old – older than most of those listening to him. But he’s not a resident here – he’s a volunteer.

"Well, I do it for two reasons," Art said. "I do it to entertain my old friends. And I like to hear those old songs myself."

"I try to do what the audience wants to hear," Art said. "But one thing… I’m not an expert piano player. Some people think I am, but I’m not. My singing is kind of mediocre, but I manage to get by."

Art can carry a tune. It’s his keyboard that’s a little more difficult.

"It’s heavy," Art admitted. "And sometimes I wonder how in the world I handle it. I have it in a crate so that it gets protected."

And yet he hauls that crate across town week after week to make music for his friends. 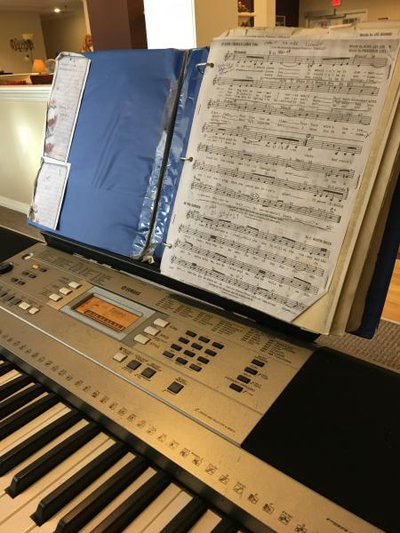 Art plays his music from a well-worn loose-leaf binder filled with music sheets featuring his favorite songs from decades ago. (Photo by Dennis Kellogg, NET News)

It doesn’t matter to him that most of the crowd is more focused on the dinner than the show.

Art started taking piano lessons when he was nine-years-old. His parents paid for the lessons in farm produce. He served in World War II and worked for years for the railroad. He eventually started playing songs on his keyboard for his second wife who was in an assisted living home for eight years before she passed away.

"I went down there and she liked to hear it, so I played it. And pretty soon, I was playing for everybody."

And his reputation has spread. Before coronavirus, Art was booked at several retirement homes in town.

"Some of the other homes heard about it, and they asked me if I’d play there, so I ended up with three," Art said. "And that’s about all you want to handle when you do your own housekeeping and cooking and lawn."

Art says he’s never dreamed of playing on a big stage before thousands of people.

"No, no, no. My performance ambitions are quite a bit less than that."

But there is one other venue where he sometimes plays -- and often eats -- the local Wendy’s restaurant.

"They come in a lot of times if they know I’m going to play ahead of time, or if I start playing, some of them go home and get some of their family," Art said. "So the Wendy’s manager doesn’t mind that."

While they take orders at the counter, Art takes requests in a corner. But not all requests. 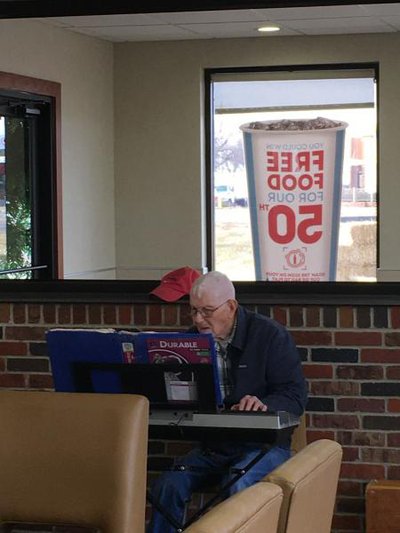 Art also plays his keyboard for customers at the local Wendy's restaurant in York, where he often eats, too. (Photo by Dennis Kellogg, NET News)

"Well, if it’s something in my book" he said. "I can play some by ear, but then I lose my concentration that way."

Whether it’s at a fast-food place or the retirement home. Art has his fans. Joyce Hackler, who is 95-years-old, just loves his afternoon concerts.

"And one day I tried to give him a tip," Joyce said. "I put some money in an envelope and put it over on the piano. He wouldn’t take it.

"I thought, gee, you know, he’s doing something that he really enjoys doing as he gets older, and it’s appreciated."

Art says he knows there will come a time when more than a pandemic will keep him away – a time when he’s just not physically able to do this.

"I’m a realist. I take things as they come. And someday, why, I won’t be able to do it, and I’ll be gone," he said. "But it really doesn’t terrorize me very much because I’m a Christian and I believe that the hereafter is just as good as where I’m at, or better."

When that day comes, Art Fredrickson, who has played the piano for nearly a century, doesn’t want to be remembered as a musician.

"I want them to remember me as a friendly person. And that’s all I care out of life."

Somehow, despite the circumstances, Art always manages to end on the right note.

Editor's Note: This story is part of our "Best of 2020 Signature Story reporting project. The story originally aired and was published in July 2020.