As Tom Osborne approaches the end of his career at the University of Nebraska-Lincoln, Big Red Wrap-Up host Kevin Kugler reflects on the high and lows while on the job and shares clips of a recent interview with the long-time coach and, more recently, athletic director.

The last day of 2012 will be the last day Tom Osborne serves as athletic director for the University of Nebraska-Lincoln. Earlier this year, at age 75, Osborne announced it was time to step down. His replacement is Shawn Eichorst, formerly with the University of Miami.

Osborne’s association with UNL began in 1967, becoming a Hall of Fame head football coach before retiring, for the first time, in 1997. When the University fired controversial athletic director Steve Pederson in 2007, UNL Chancellor Harvey Perlman asked Osborne to step in. 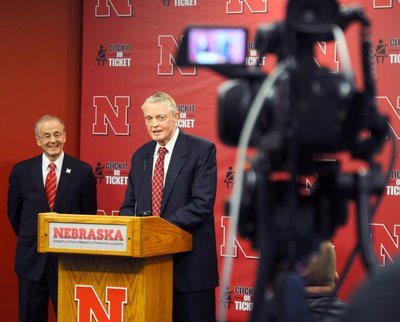 p, Osborne reflected on his five years in that job. High points have included a building boom in athletic facilities including an expansion of

, a new practice facility for baseball and softball, construction of a downtown arena featuring UNL basketball games, and renovations on the Devaney Center, the new home for women’s volleyball.

Below are reflections on Osborne’s term as AD from Big Red Wrap-Up host and Big Ten Network sportscaster Kevin Kugler collected during a conversation with NET News producer Bill Kelly. Tom Osborne’s comments were drawn from the retired coach’s recent interview on the program. (The entire interview can be seen below)

ON THE STATE OF THE ATHLETIC DEPARTMENT IN 2007

Kevin Kugler: The Athletic Department was in chaos and that’s not too strong a word to use for what was going on. People were leaving; people were looking over their shoulder. It was an uncertain atmosphere. The football team was losing; there was a real despondent feel around the campus of the University of Nebraska-Lincoln on the athletic side and he was brought in to be the stabilizer, to be the bridge builder and to get everything back on track and in all of those areas.

Tom Osborne: There were certain things that we found had disappeared (under Steve Pederson’s term as athletic director). We found the former players were not at practice for the most part, did not feel they were welcome in the building and that was unusual for me. Most of the All American pictures had been taken down and a lot of the history had pretty much been cast aside. I really don’t know why that was done. We tried to make the players feel welcome to come back and tried to restore some of the history and the tradition.

Kugler: He’s a fair man and I don’t think any coach comes in to a position like that (saying) ‘I’m going to fire this guy no matter what happens.’ I think he wants coaches to succeed and even though Bill Callahan was certainly not his guy. He looked at a program that couldn’t sustain at the level it was at in 2007. He had to make that change.

Osborne: In October 2007 I was hoping very much that I wouldn’t have to fire a coach. I was a coach. I know what goes into it. I know how difficult it is. The last thing I wanted to do was fire a coach.

I didn’t want to see the fan base get so discouraged that we had empty seats and it was hard to recruit. I let him know in the middle of the season to let him know what was expected. And I hated to put that kind of pressure on them but at the same time they needed to know.

So we went out to Colorado and lost that last game (of the season) and ended up 5 and 7 and did what I told them I was going to do.

Kugler: Coach Osborne came back with a specific set of goals to accomplish and he feels like he has accomplished the majority of those goals and he’s decided that it’s time to step aside.

Osborne: Most of the things that I felt I could do that could make a contribution have been done. And I could have waited around and cut a couple ribbons, but just didn’t want to do that.

Kugler: My assumption is that when they open the new arena, they’ll ask Tom Osborne to come back and cut the ribbon anyway, so I think he looked at the goal list that he had and he said, I’ve accomplished A., B., C., D. and E. and he feels like he’s leaving the University on a solid footing for years to some and so he’s decided now it’s time to finally step aside.

Any time you take a job in the latter years of your career you have to go in with a finite agenda because you know that at some point you’re not going to be in that job anymore and I think that’s the benefit of the wisdom that comes with age. Tom Osborne walked in and I think knew that while he didn’t have an exact date in mind, he knew that there was going to be an end date sooner rather than later.

Osborne: The first thing I thought needed to happen was the Student Life Center, because academics are really critical to recruiting and it impacts all 23 sports. So I felt that was the number one move. With that we were able to expand the training table which also affected all sports.

The research area over in the new east stadium addition, I think, is going to produce some stuff that is going to be pretty remarkable in terms of concussion research, better equipment, better strength training, nutrition, psychology of sports that will impact kids all around the country.

Kugler: This was as productive a stint as an athletic director can have because he’s done so much in so little time. He looked at each of the sports that have the possibility of producing revenue for Nebraska and because he had a finite amount of time, he could go to boosters and say, ‘look, I don’t have a lot of time, I’ve got to get this done.’ 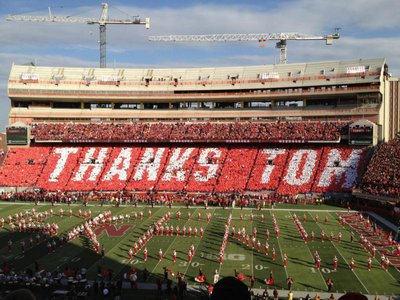 The send off for Osborne at the last Husker home game of 2012. (Photo courtesy UNL Athletic Department)

Football. He had to get that on the right track. That’s the cash cow. He feels good about Bo Pelini and where the football program is at, certainly as compared to 2007. Football has to be strong or none of the rest of it happens. Basketball, baseball, none of it matters without a strong and viable football program that’s producing the kind of money in order for the entire athletic department to be successful

Basketball. New practice facility, new arena. Osborne didn’t want to fire Doc Sadler but he felt like he had to so now he feels like the basketball program is on the right track.

Volleyball. Moving into the Devaney Center. A chance for them to produce more revenue in a sport that has great demand.

He came in with a list of goals, looked at each of the programs, and has done what he thinks is best to secure these programs well beyond his tenure at Nebraska. Of course, the biggest accomplishment of Tom Osborne’s time as athletic director is the entrance into the Big Ten Conference and that was done to secure his athletic program for generations to come.

OSBORNE AND THE BUSINESS OF COLLEGE ATHLETICS

Kugler: I think Nebraska’s already gone through the transition to making a business of athletics. That happened when Bill Byrne (athletic director, 1992–2003) came in and took over for Bob Devaney. Tom Osborne came in and continued the business of athletics. He did it from a football coach standpoint but you cannot run a multi-million dollar business, like athletics is now, without running it like a business. You have to and it can be run like a family business, it can be run like a major corporation, it can be run somewhere in between. There are different ways to run major businesses and there are different management styles but I think Nebraska went through that transition decades ago when Bill Byrne came in as a businessman athletic director and I think Nebraska is just continuing that now.

Kugler: (Volleyball coach) John Cook has certainly had a great run of success with volleyball. Connie Yori’s done a tremendous job coaching Nebraska Women’s Basketball and I guess that’s a nice thing for Tom Osborne but it’s also a bad thing because unfortunately to this point anyway, the women’s sports are not revenue producers to the extent that the men’s sports should be or can be. Football being one and men’s basketball certainly can generate more revenue if the program becomes more successful. It’s a nice thing that you don’t have to worry about it but in the same token, I think you prefer to have your men’s money sports on a solid, solid ground first before anything else gets taken care of.

Osborne: So overall it was fun. It was good. The relationships live on. The trophies fade. The rings get lost. So I probably couple times a day or seven or eight times a week hear from a player or somebody comes in see somebody who was headed off a cliff help them make a U-turn and those kinds of things are always gratifying to see.