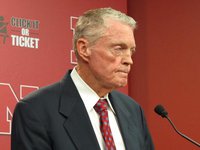 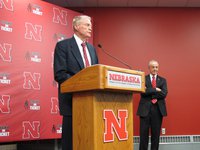 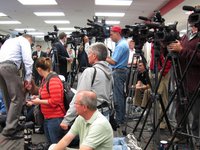 Tom Osborne announced Wednesday he is retiring from his position as athletic director at the University of Nebraska Lincoln. After more than 40 years at UNL, including 25 as head football coach and five more as athletic director, Osborne said he is ready to step away.

“I don’t want to be one of those guys where everybody’s walking around wringing their hands trying to figure out, well, what are we going to do with him,” Osborne said.

Osborne said he will step down as athletic director as of January 1, 2013, although he will stay around through July 2013 to assist his successor. The 75-year-old said the change is not because of his health. He feels fine. He said he felt it was the right time.

Mike Babcock, who writes about Husker sports for Hail Varsity magazine and is also an occasional contributor to NET’s Big Red Wrap Up, said while Osborne is known as a football coach his focus as athletic director went beyond that.

“You know if you were at a women’s basketball game, chances are you’d see Tom and his wife Nancy at the basketball game,” Babcock said. “A gymnastics meet, you might see them there. He was very supportive of other sports as well. The perception that he’s Nebraska athletics – he brought that to all sports.”

Osborne came in as athletic director in October 2007 when the football program was struggling and support was divided inside and outside the program.

But he did not return as just a caretaker. Osborne fired football coach Bill Callahan and hired Bo Pelini. He helped Nebraska move from the Big 12 to the Big 10 Conference. He also made major changes for basketball – hiring men’s coach Tim Miles, building a new practice facility, and pushing for the new Pinnacle Bank Arena going up in downtown Lincoln.

Osborne said he felt one of his most important accomplishments was restoring what had become a fractured program before he returned five years ago.

“At this point we’ve got our former players behind us and involved,” Osborne said. “I think the fans are pretty well engaged. And I think the people in the athletic department are working together and so, I think for me that’s the most significant thing.”

UNL Chancellor Harvey Perlman joined Osborne at the announcement. Perlman is leading the search for the next athletic director. He said UNL has hired a recruiter to do a national search for someone with more than a good resume.

“It’s not just experience and credentials,” Perlman said. “It’s a personality and a viewpoint that has to fit with Nebraska and what Nebraska has accomplished and what our ambitions and our culture is.”

Perlman said he has already done some interviews, but he said not to expect a public process. He would not name potential candidates. Babcock said Perlman has a big decision ahead of him.

“There are probably people that I’m not even aware of who have the administrative ability,” Babcock said. “The question is the credibility that Tom Osborne brought to the position. That’s going to be the difficult part. Because I’m sure, again, you can find people who can administrate.”

On social media, fans, politicians, former colleagues and competitors expressed their gratitude and wished Osborne well in his retirement. For his part, Osborne said he was not feeling nostalgic.

But as a legend gets ready to leave the game, a state that puts a lot of pride into its Husker sports wonders who is prepared to fill Osborne’s shoes.