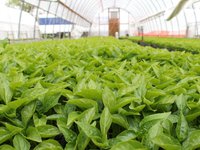 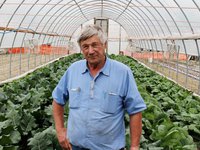 California grows almost half the fruits and vegetables in the U.S. It’s also deep in drought and some farms are short on water. That may sound like a chance for Midwestern farmers to churn out more peppers and broccoli, but it’s not that simple.

The California drought is not the golden opportunity that it may seem, not yet. Even in a drought California still has big advantages over the Midwest.

You can see why at Daniels Produce, a 500-acre vegetable farm along the Platte River in eastern Nebraska. Andy Daniels and his crew are rushing around steel barns and plastic covered hot houses sprouting cabbage seeds, tending to bell pepper seedlings, and deciding what kinds of squash to plant.

The food they grow will sell across the country from small town veggie stands to Walmart distribution centers.

For three years, Daniels has been watching for a business opportunity from California’s drought. He’s been waiting for Central Valley vegetable farms to cut back and save water.

“I don’t know how long they can get by,” Daniels said. He’s heard that some farms have been shut off from reservoir water and are now pumping from groundwater aquifers. “They’re going to run out of that deep aquifer water.” 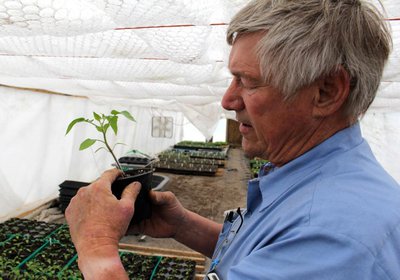 Andy Daniels holds a grafted tomato. The top is an heirloom variety prized for its flavor. The rootstock is a disease and pest-resistant hybrid. (Photo by Grant Gerlock, NET News/Harvest Public Media) 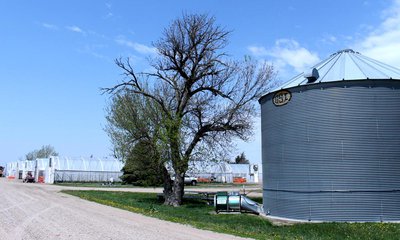 Grain bins stand at the Daniels’ farm entrance, a relic of their farming past. Andy Daniels started transitioning from corn and soybeans to vegetables in the 1980s after a massive flood. (Photo by Grant Gerlock, NET News/Harvest Public Media)

At least that’s what he’s been waiting for, and he’s still waiting.

“People who think that they’re going to make money because of California, jump on in. We’ll see how long you last,” Daniels said.

There are a few ways the Midwest is still at a disadvantage when it comes to raising fruits and vegetables on a large scale. First, is the climate.

California is a collection of micro-climates. Some spots are perfect for broccoli. Others for lettuce. The weather is predictable. In Nebraska, it’s erratic from summer to winter.

“You know, the average (temperature) in Nebraska may be 70 degrees. All that is, is the average of 120 and 20,” Daniels said. There’s hail and wind. The weather works against you.

The next problem is infrastructure. A field of peppers can’t be grown with corn machinery. It takes a $14,000 vegetable sorter and a $400,000 cold storage building. And that’s before any work is done. Labor is Daniels’ biggest expense. He’ll spend anywhere from $800,000-$1 million on labor, including teams of migrant workers because vegetables are picked by hand, not with combines.

Even if you have a crew and the equipment, there’s a learning curve. Daniels grows 20 to 30 varieties of vegetables and each one is unique.

“You’re gonna find God made a worm and a disease for every plant out here,” Daniels said. “I never knew there was such a thing as an asparagus beetle until I raised asparagus.”

Things were different fifty-years-ago when fruit and vegetable production was a larger part of Midwest farming. Now it’s all about corn and soybeans.

Dave Swenson, an agricultural economist at Iowa State University, says there is room to grow more fresh produce in and around urban areas. But not on a national, industrial scale.

Ramping that up in the Midwest would take decades. Meanwhile, the southern U.S. is more likely to take the pressure off of California.

“Many people have talked in the recent weeks and months about the Mississippi Delta, in that Mississippi flood plain area,” Swenson said.

Growers in Mexico and Canada will also be in the mix.

But there is a place where the Midwest can make a play on the drought: dairy and beef. The reason is alfalfa hay, used for livestock feed. Cattle ranchers in California might think about moving to greener Midwest pastures as their state grows less alfalfa to save water.

Dan Putnam, a forage specialist at the University of California Davis, says alfalfa acres there are headed for a record low.

“What (ranchers) do is they move water from one crop to another,” Putnam said. “If a grower has a tomato contract for example, they may let an alfalfa field go dry just because they don’t have enough water to go around their whole ranch.”

And that’s why Andy Daniels is still searching for a silver lining from California’s drought disaster. Fruits and vegetables will be the last crops to go dry.

“So where’s the opportunity? I’ve been telling my daughter for two years they got a drought in California, it’s gonna change, we’re gonna make money," Daniels said.

But instead, he says, prices for things like watermelons and cabbages went down. Daniels focuses on labor costs, food safety rules and new markets. California is way down the list.

America’s dairy cows are milk-producing machines, but is there a ceiling?
To limit sales, states propose legalizing raw milk
‘Prayer And Work’ Go Hand In Hand At This Ranch