One Town’s Hope Rests on Money and the Mighty Mississippi

The Mississippi River system is both an artery and a vein. It pumps ag products out of the heartland and into the world while bringing back fertilizer and steel to keep that economic engine purring.

But there’s too much water. Flooding is forcing boats and barges to wait for the river to drop. In the Quad Cities, bordering Illinois and Iowa, the Mississippi just dropped below flood stage for the first time in 96 consecutive days, crushing the prior 42-day record.

Mark Glaab, who is the facilities manager at American Commercial Barge Line’s Cairo office, said they’ve had good luck in recent years with moving more material upstream. But when the water is high, full barges have to wait until levels drop. (Photo by Madelyn Beck, Harvest Public Media)

The stalled river traffic could be an opportunity, though, for a town that’s been slowly dying for years: Cairo, Illinois. It has no grocery store or gas station, but the town is trying to construct its way out of poverty while giving those barge companies a place to unload stranded cargo.

On June 12, Mark Glaab looked through papers on his desk to find that there were 642 barges in the Ohio River next to his American Commercial Barge Line office near Cairo.

“And that’s just me, that’s not the other fleets in the area. That’s just ACBL,” said Glaab, who manages the facility.

The barges were visible outside his window, but the flotilla carrying thousands of tons of product was still dwarfed by the high, muddy water. Glaab said plants in Chicago threatened to shut down because they were running out of the products floating behind him.

“I get three or four calls a day. People wanting to be able to unload their barges here into trucks or into trains because we can’t go onto the river until the water goes down,” he said.

The products can’t unload in Cairo, though, because there isn’t a port. 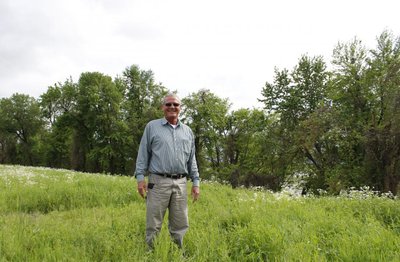 Larry Klein, who is on the local port authority board and works with the local utility, stands next to the Mississippi River on land where they’re hoping to build a port. The city owns this land but the public utility manages it. (Photo by Madelyn Beck, Harvest Public Media)

Cairo has tried to get a port before. The location makes sense. It’s at the confluence of the Ohio and Mississippi River, which both narrow as they go north. It’s where many barges split apart to make it through locks upstream. And Cairo has rail lines and nearby interstates.

However, poor river conditions and funding challenges have kept the port from becoming a reality.

“(The port) has been on the radar of, you know, different groups for many years. But this is the closest we've ever been actually building one,” said Larry Klein, a semi-retired utility company worker and member of the local port authority board.

Klein is optimistic about the port, even as he expressed dismay over how far the town has fallen.

“I’ve seen it in its heyday and I see it today. And well, it hurts,” he said. “You know, you can understand never having nothing...But to have everything and lost it all, something was wrong.”

Cairo’s Past And Future

Cairo has nearly died and come back several times, starting in the 1800’s.

Its most recent boomtime was in the 1950s and early 60’s. Cairo had more than 15,000 people and was a hub for rural-southern, Illinois.

While many were doing well around then, the black community was not. They had no representation and few opportunities, so they started fighting to be seen as equals. In 1967, riots broke out across the country, including in Cairo. Stores were boycotted. Businesses burned. 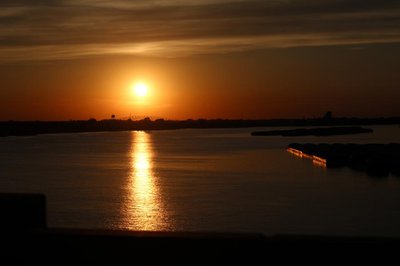 The sun sets over the Ohio River, looking back towards Cairo on the left. Barges sit parked in the water, waiting for levels to go down far enough for boats to ferry them north. (Photo by Madelyn Beck, Harvest Public Media)

On top of it all, a new interstate bypassed the town completely.

Now, people like Kenneth Taake hope that Cairo rebounds because it would be a boon to the entire region. Taake is a farmer in Ullin, Illinois, and he said he used to drive 20 miles to Cairo to get clothes and supplies as a kid. Now he’ll drive 30 or even 40 miles to get big items. Beyond supplies, though, Taake wants to bring back younger people.

“Most of our youth are not staying in the area. I think that’s true of most rural areas, but there’s not really anything to draw them back,” he said, adding that his own daughter moved to the St. Louis area. “So, you know, anything that would help our economy would be good.”

Brittany Harrell works the front desk at the only hotel listed near Cairo -- a Quality Inn that caters to those getting off Interstate 57. She said she stayed in Cairo to care for her father, and is now raising three kids, ages 9, 6 and 5 months. She said she wants them to have more options.

“We really need things to come back so people can live again here. And not just stay, you know?” she said. “Like there's nothing for my kids to do here. There's no kind of sports for them to do...it's just nothing,” she said. 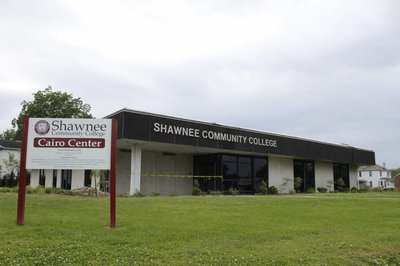 Shawnee Community College wants to give kids like Harrell’s opportunities as they grow up. The college serves rural communities around the southern part of the state, often giving students credits that can transfer to bigger universities or train them for trades.

The college opened a new annex in Cairo in December, and aims to help more kids in high school there take dual-credit courses. If a port were to come in, the college said it’d be poised to get those local students jobs. 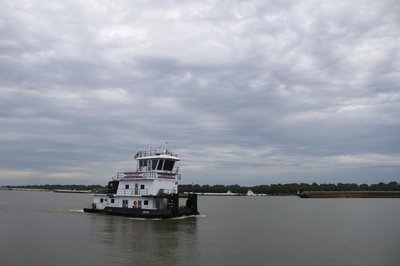 The Shawnee Forest towboat steers down the Ohio River near American Commercial Barge Line’s office outside Cairo, Illinois. As of June 12, there were more than 600 barges waiting to go upstream when water levels drop. (Photo by Madelyn Beck, Harvest Public Media)

The port project does have a champion in Congress named Dale Fowler. He said in April that securing something like a thousand-job manufacturing plant isn’t realistic for that depressed area.

“But what is realistic is to capitalize on some of the resources such as the confluence here of the Mississippi and Ohio here in Cairo,” he said. “An opportunity that doesn’t exist anywhere else in the entire nation.” 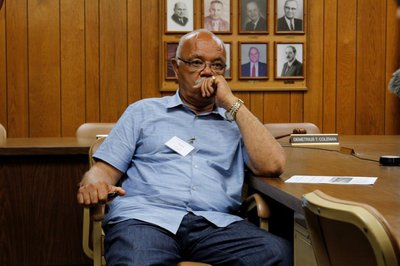 Former Mayor Tyrone Coleman has high hopes for a port in Cairo. He said a port could revitalize this town which once was home to 15,000 people. (Photo by Madelyn Beck, Harvest Public Media)

Fowler highlighted the hundreds of residents who recently lost their homes in Cairo when two public housing buildings were condemned. However, he said he felt a growing momentum to support Cairo in the wake of these challenges.

Two years ago, the Rauner Family Foundation gave $100,000 to help get the port planning off the ground. Then the legislature gave $1 million to the project last year. This year, a capitol funding bill has $150 million set aside for port funding in Illinois.

Governor J.B. Pritzker is expected to sign that capital funding bill in the next few weeks, which will explain how towns can apply for those funds. Cairo asked for half of the pot at $75 million -- but will be competing against 18 other port districts to get it. 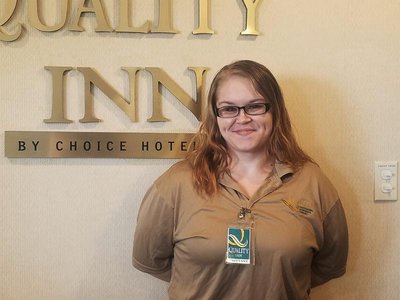 Brittany Harrell works the front desk at Quality Inn Cairo I-57, the only hotel listed online near Cairo. She said even in the last 30 years, the town has changed for the worst. She said many residents depend on a nearby dollar store or rides from friends to make it to pharmacies in neighboring communities. (Photo by Madelyn Beck, Harvest Public Media)

If Cairo doesn’t get the $75 million, Klein said they’ll use whatever money they do get to start groundwork for the port project to entice private investors.

“Hopefully build some roads, improve electrical, natural gas, sewers, water. Just improve the infrastructure and get it that much closer to being it done,” he said.

Former Mayor Tyrone Coleman has high hopes for this port, too. He told a group of journalists in April that there’s no limit to what this port could bring. Maybe a few trucking jobs here, then a gas station there. Maybe a few more people moving into town.

“And that’s the excitement of it all is the unknown factor,” he said. “I don’t want to say (a port would) ‘bring the past back’, but at least bring it to a point where there is opportunity. And that’s what’s been lacking in this most southern point of Illinois in the past couple of years.”