The invasive weed Palmer amaranth is spreading throughout the country, leaving Midwestern farmers worried about their fields. But with herbicide-resistance a growing concern, farmers are having to explore new methods for weed control.

A fast spreading, crop destroying weed may be coming to the farms near you.

Palmer amaranth, which has plagued southern farms for decades, has been marching across the Midwest. It can decimate a crop. It can withstand many common herbicides. And it can cost farmers millions.

Roger Hargrafen, a farmer in Muscatine County, Iowa, is on the front lines in the battle against Palmer amaranth. His is one of four Iowa farms confirmed as having it.

“I think it's producing... wanting to produce seeds,” he said, looking at the long pointy part of the plant carefully. “I'm leery of it.”

The weed can grow as tall as an NBA player and one plant might produce a million seeds. After ravaging fields in Arkansas, Louisiana and Mississippi, farmers hope it won’t spread across Iowa’s fertile ground. 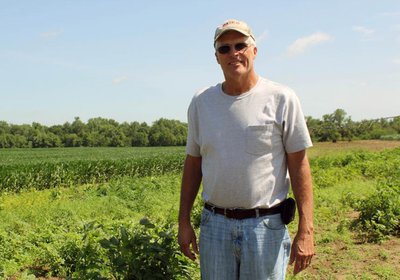 Iowa farmer Roger Hargrafen is on the front lines in the battle against Palmer amaranth in the Hawkeye state. (Photo by Amy Mayer, Harvest Public Media) 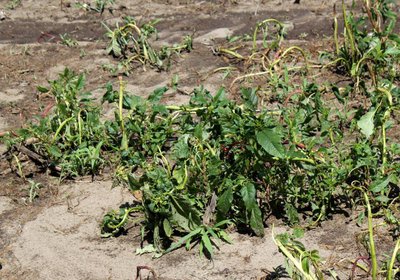 Even after being sprayed with herbicide, some Palmer amaranth plants remained alive on Roger Hargrafen’s field. (Photo by Amy Mayer, Harvest Public Media)

Six acres of Hargrafen’s farm would have been corn this year. Instead, they’re mainly growing Palmer amaranth. Last fall, Hargrafen destroyed three acres of soybeans after finding the fast-spreading weed and then added a buffer around those acres this spring. He wants to contain the Palmer amaranth and prevent it from going to seed. But it won’t be easy. After mowing and spraying herbicide, he’s hoping a sorghum cover-crop will stymie future weed growth.

Hargrafen will have to wait at least another year before planting. He also plans to walk the end rows of his corn fields, searching for rogue Palmer amaranth to hand-pick. During harvest, he’ll blow his combine clean with an air hose before moving it to another field, just in case any weed seeds survive to hitch a ride.

Beyond his time, it’s already costing him the three acres of soybeans last year and six acres of corn this year. But Bob Hartzler, a weed scientist at Iowa State University, says Hargrafen’s doing everything right.

“He is doing a great job at trying to prevent its spread in other fields and to eradicate it,” Hartzler said. “And that’s not something I have seen farmers do in my 30 years here in Iowa. So there is a change in attitude, I think, of farmers.”

Perhaps, it’s a realization that industry may not be able to continue offering cheap chemical solutions to weed problems. Just as human diseases can develop antibiotic resistance, plants can become resistant to herbicides, like glyphosate, better known by its trademark name, Round-Up. That’s what agronomists are seeing with Palmer amaranth. And the supply of new options is finite.

“Because it is very difficult to find these new chemicals,” Hartzler said, “just like with antibiotics and super-microbes that are causing problems in hospitals.”

Jason Norsworthy, a weed scientist at the University of Arkansas, has watched farmers react differently to Palmer amaranth in his state. He also works with industry to keep abreast of new developments.

“There’s absolutely nothing in the pipeline right now, from a new mode of action standpoint, that we’re going to have here within the next 6-8 years,” Norsworthy said.

He says it takes two or three management strategies to keep Palmer amaranth at bay. Proactive farmers have spent up to $85 an acre to succeed. Many who didn’t, failed. 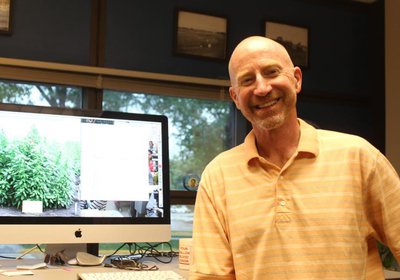 “They went bankrupt as a result of glyphosate-resistant Palmer amaranth,” Norsworthy said. “They essentially lost their crops, and they lost their crops for multiple years. And after a period of doing that, you’re no longer farming.”

In Missouri, Kansas and Nebraska, farmers are fighting the same battle and longing for reinforcements. But, Norsworthy says, that probably won’t include new chemicals.

“We’re going to have to integrate some pretty wild and radical concepts into how we deal with weeds,” Norsworthy said.

For now, Norsworthy’s message to Midwestern farmers: be vigilant and proactive.

That’s what Hargrafen is trying to do. From his pickup truck, he looks out the window and points to areas where stands of Palmer amaranth hang on amid dead grasses and other weeds. He understands all too well how things got to this point.

“Round Up has us spoiled,” he said. “That was a beautiful herbicide.”

But beauty can be fleeting. And Palmer amaranth may be offering him a glimpse into farming in a post-glyphosate world.

At least 28 states have confirmed the presence of Palmer amaranth. And many are struggling with strains resistant to common herbicides.

With Conventional Farmers Embracing Dicamba, Specialty Crops Likely Next in Line for Damage
Food companies show concern about farm runoff
Farmers on the meaning of organic