On a mission to fill a gap in dental care

Outside the abandoned ALCO discount store in Alliance, Neb., it looked like Black Friday. Dozens of people were camped out on a hot July night, sitting in lawn chairs, listening to the radio and trying to keep the mosquitoes at bay. Each person came with his or her own wish-list, but they weren't in line to go shopping: they were waiting through the night to be first in line for free dental care.

Nate Doda, a college student from Fort Collins, Colo., came to the Mission of Mercy clinic for two root canals and eight fillings. 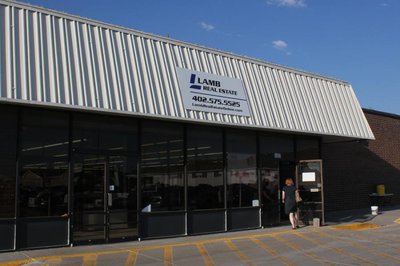 The Alliance Mission of Mercy was held in a strip mall flanked by an empty discount store and a former supermarket. 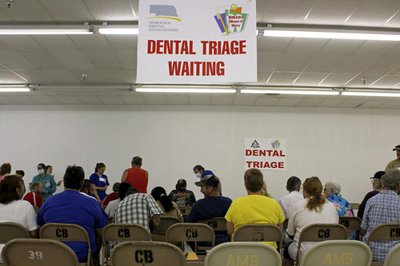 Patients were triaged by volunteer dentists before being sent on for treatment. 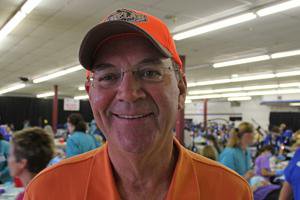 "I'm a student right now," Doda said. "So the dental work that I went to see a dentist for, (they) quoted me at about two-thirds of what I make for an entire year."

Adam Vancil of Scottsbluff, Neb. was urged by his mom to make the trip to the neighboring panhandle community.

"I'm pretty sure I've got a couple (teeth) I need pulled and a couple fillings, and that would at least cost two grand," Vancil said. "And I'm in-between jobs at the moment, so there's no way I'd be able to pay for it."

In the morning, the line moved inside the building, where patients were looked over and then sent to the opposite end of the strip mall for treatment - in a former supermarket. The store was transformed, with rows of tables and dentists chairs outfitted for cleanings, fillings, extractions, root canals, even dentures in a day. (Dentures usually take weeks.)

The two-day Mission of Mercy in Alliance was put on by the Nebraska Dental Association. The events started in Virginia in 2000, and Nebraska has held one each year since 2005.

Cork Taylor, a retired Alliance dentist, organized the Alliance Mission of Mercy. He said too many people fall through the cracks - especially as fewer Nebraskans have dental coverage than have health coverage.

"They have no insurance. They have a low income. So they have enough money for a roof over their head and food on the table for the family, but not enough for dentistry," Taylor said.

And while a hospital emergency room is required by law to treat a patient regardless of ability to pay, he said, dentists are different.

"You can't force a dentist to take just anyone," Taylor said. "That's his private business, and he can do what he feels is best for his family and himself to provide care. Many dentists see everyone. Some choose not to. But these folks are the ones who fall through the cracks, and that's why we're having this."

A Kaiser Family Foundation estimate puts the number of Americans without dental coverage at three times the number without medical health coverage.

According to the 2010 state survey on dental health, the most recent, 32 percent of Nebraskans had gone more than a year without a visit to the dentist. That's about even with the national average, but a higher percentage than in previous years.

Dr. James Jenkins, a professor at the University of Nebraska Medical Center College of Dentistry in Lincoln, said untreated dental problems can do more damage than a sore tooth.

"There have been cases of where, unfortunately, the infection got so bad the patient passed away," Jenkins said. "That would be if the bacteria got in the bloodstream and you have different organs infected, like a brain infection, which did happen a couple of years ago to a child in Washington, D.C."

That child was Deamonte Driver, who was only 12 years old when he died in 2007 from an untreated infected tooth. His story became a rallying cry in the public health community. 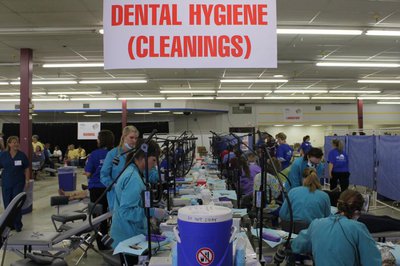 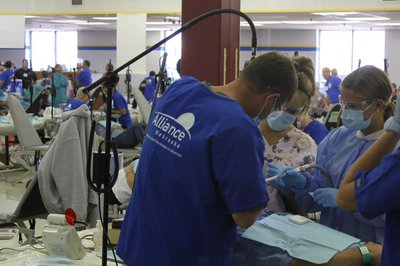 A dental team extracts a patient's tooth. Another Mission of Mercy is being planned for August 2013 in Lincoln.

There are clinics in many of the Nebraska's largest communities doing dental work at a reduced cost, but 43 of the state's 93 counties are short on dentists to begin with. Nineteen counties have no dentist at all.

Even in places where there's no shortage, the need is great, said Dr. Jim Howard of the Creighton University School of Dentistry.

"We could be treating patients here in the dental school 24 hours a day and still not meet the needs."

Howard gave the state government credit for emphasizing prevention, especially for children. For kids on Medicaid, he said dentists are paid close to what they would earn through private insurance; for adults, Medicaid provides good coverage, coverage cut by many other states, but it doesn't pay well, and it can be hard to find a dentist who takes those patients.

"There are some very dedicated practitioners who take Medicaid patients," Howard said. "Then there are others who just find that financially, they just cannot financially accept them."

So many people are left looking for something else - and hundreds of them showed up in Alliance.

Over two days, 70 volunteer dentists treated around 830 people. The work would have cost $425,000 if it had been done at a dentist's office. Angel Yohn from Hastings was one of those who camped out overnight.

"I have four extractions done, and now I'm going back in to have fillings for decay," Yohn said. "It was worth a six-hour drive and a night on a mattress to come. This would have cost thousands."