On a sweltering Sunday afternoon, a crowd estimated at more than a thousand people walked from 72nd and Dodge to Omaha's Memorial Park to hold a rally to protest police and society's mistreatment of minorities.

As temperatures topped 90 degrees, Reverend J. Shannon, serving as kind of a master of ceremonies, looked out on the diverse crowd that had come together, and suggested they would have an effect.

“The moment that the people make a fist in unity – I’m talking about black people, brown people, white people purple, people, yellow people, all people – the moment we make a fist there is nothing we cannot overtake in every system that rules our country. It’s set up that way. Democracy works when the people take action,” Shannon said.

Shannon then introduced Lt. Sherie Thomas of the Omaha Police. Despite the origins of the demonstration in the death of George Floyd while in custody of the Minneapolis Police, Shannon urged the crowd to give her a warm welcome.

“Now we got Sherie Thomas who represents us. If you know what that means, she represents us and she’s about to come to the podium. I want you to show her some legit love, not because of anything else but because she’s a person. She’s a human being that represents a shield You understand that? Make some love for Sister Sherie Thomas,” Shannon said, as the crowd cheered.

At that, Thomas, who’s black, addressed the crowd and expressed sorrow at the death of James Scurlock, a black man shot to death by a white bar owner during a protest in downtown Omaha a week ago. County Attorney Don Kleine has declined to charge the bar owner, saying video evidence shows the shooting was justified. But Kleine has supported a grand jury to take another look, and Thomas repeated calls for people with cellphone video of the shooting to come forward. She also said police support people’s rights to protest peacefully.

“We know people are hurting. But my message is that, as individuals decide to protest, because that’s your right to protest, we just ask that it’s peaceful. And the gathering, the large number of people that marched down Dodge Street – that’s history – that’s history y’all,” Thomas said.

Thomas later said she’d been told the crowd was over 1,000 people.

Back at the mic, Shannon brought the message back around to political action. 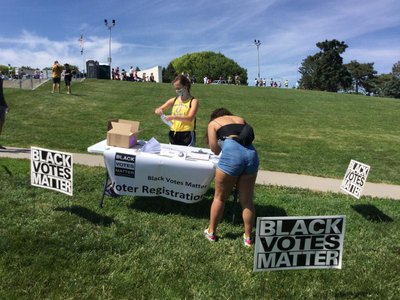 And after the rally, Kaylean Caldwell of Omaha, who graduated from high school a year ago, was registering to vote for the first time at a table set up in the park. Caldwell said it’s important, especially now.

“Just especially with what’s going on right now, I thought that it’s important that everyone’s voice is heard, and the best way to do that is through legislation and getting things passed, so, yeah,” Caldwell said