Team Rubicon will be working to aid those in need of assistance following last week's storm through the weekend. (Photos courtesy of Mark Coffin, Team Rubicon). 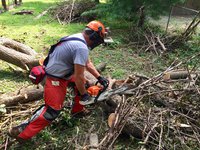 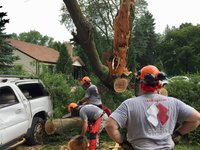 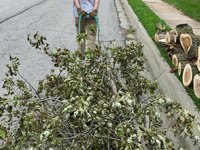 Disaster response volunteers have come in from across the state and surrounding areas to aid some of Omaha’s most vulnerable community members, shaken up from last week’s storm.

Team Rubicon will be in town until the weekend to help move fallen trees from homes for those who aren’t able to move the debris on their own or can’t afford to hire someone to do it. The nonprofit is made up of roughly 70% veterans and 20% first responders.

Task force leader Mike West came all the way from Denver to help. Team Rubicon volunteers in the Omaha area jumped into action right after the storm hit the night of July 9th. They set up a local service project to get debris out of roadways and blocking residential properties. However, West said the local Omaha team identified a greater need for assistance in the area, and asked for additional assistance from the greater Team.

"What we're trying to do is focus our efforts on those with the greatest needs," West said.

West said that, even after the task force finishes up in the city, there are other resources to further assist those who need it. To request their services or other disaster assistance dial 211.