An out-of-state oil company faces unexpectedly strong opposition to its plan to use an out-of-service oil well in Sioux County to dispose of the saltwater leftovers from nearby fracking operations. 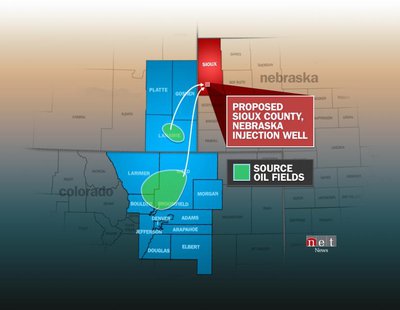 The public documents reviewed by NET News indicate the proposed project would be the largest operation of its type in the state. The facility would accept upwards of 80 trucks a day of saltwater waste. The brine, which may contain chemicals used in the drilling process, would be processed on location before being pumped underground. The application states that “initially” up to 10,000 barrels of wastewater a day would be injected into sandstone formations a mile underground.

According to the Oil and Gas Commission, 115 injection wells using a similar process are located in Nebraska. All of those operate on a much smaller scale than the Terex project.

Residents in the panhandle, raising concerns about spills, groundwater contamination, and an increased risk of earthquakes, have organized opposition to the project in advance of the Commission’s required public hearing.

“I just have reasonable doubts about the safety,” said Jane Grove, whose ranch sits across the highway from the well site.

The opposition caught the developer by surprise.

“It kind of flabbergasts me that such a big deal is being made of this,” Gottlob told NET News.

The saltwater, or brine, is a byproduct of “hydraulic fracturing,” known as fracking. Pressurized water is used to dislodge underground oil and gas deposits. The process also releases salt-laden pockets of water trapped beneath the surface. Water that is not returned to the original well site is often disposed of in wells no longer producing oil.

The proposed injection well site sits 14 miles north of Mitchell on the east side of Highway 29. The out-of-service oil well is a “perfect candidate to accept produced water from Wyoming, Colorado or Nebraska” according to Gottlob. The wastewater would come primarily from the out-of-state well fields where demand for disposal sites has increased dramatically.

“There are other facilities that do take water disposal,” Gottlob said, but trucks hauling barrels sometimes “have eight or 10 hour waits in line to unload their water.

“That says there is a demand,” he added.

The company’s application to use the injection well says the facility would occupy 11 acres of land and employ 10 to 15 people. Trucks would deliver the water to the site where the water would be processed to remove oil and chemicals leftover from the delivery site. The application does not specify where those hazardous wastes would be taken.

The processed water would be injected under pressure to one of two layers of porous sandstone nearly a mile underground. The well pipe and casing passes through the Ogallala Aquifer and a thick layer of shale above the disposal site. Before being capped the well extracted oil through the same layers without incident.

“This is something the industry is doing very regularly these days,” said Cara Burberry, a geologist teaching at the University of Nebraska-Lincoln. Burberry is not affiliated the project and reviewed the materials submitted by Terex at the request of NET News.

Burberry examined the company’s cross-section diagram of the well. It shows the underground pool of water is separated from the sandstone where the wastewater will be injected by more than 6,000 feet of impermeable clay. That shale deposit, Burberry said “is going to prevent water from above the aquifer from going down (and) neither can the water being injected go up.”

“It would have to get through two kilometers of essentially impermeable material for that to happen,” Burberry said.

“Everybody just needs to understand that it is going to be a clean project,” said Gottlob. “It’s going to be run professionally. We aren’t going to be introducing toxic chemicals into the ground. We will put water in the ground that probably is cleaner than where it came from.”

Opponents point out even if the geology can keep the groundwater separated from the saltwater, it would not rule out human error or equipment failure which could cause a problem. 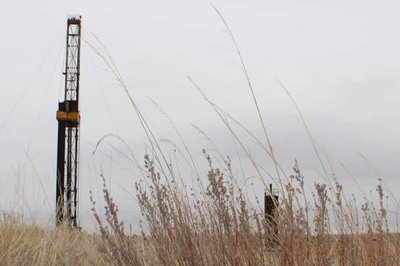 The application, while meeting the legal requirements for an application under Nebraska law, has few specifics about how Terex plans to operate the injection well. The lack of detail bothers Sioux County residents who reviewed the documents on file.

“We don’t have all the answers,” Grove said, sitting in a booth at the Rustic Tavern in Morrill, Nebraska.

Grove and her husband have operating oil wells on their property and are not opposed to the industry in general. However the injection wells raise concerns in spite of the “wonderful technology” available to the oil producers. Grove feels she and her neighbors have not been given enough information about the scope of the operation or the potential side effects of wastewater disposal.

“I believe in trying to limit your risk,” Grove said about the potential for harming the local environment. If you can limit your risk you have done a big part in preserving things for the future.

The saltwater waste from the wells is highly concentrated and a concern even without the other chemicals used in the drilling process. A University of Oklahoma study stated “salt water is recognized as perhaps the largest single potential contaminant of potable groundwater” in areas using injection well disposal.

Spills of the oil field brine on land are considered an environmental hazard. Last month a pipeline leak at oil fields outside of Williston, North Dakota spread more than 3 million gallons of the liquid across farmland. According to the Williston Herald the state’s Department of Health found “high readings” of contamination in two nearby streams that feed into the Missouri River.

While opinions differ on the environmental harm caused by oil field brine, research by Louisiana Tech University found cleaning up salts after an accidental release “is essential.”

Small earthquakes brought on by injection wells are another concern raised by opponents of injection wells in the region. The U.S. Geological Survey determined “while wastewater injection has not been linked to large earthquakes scientists cannot eliminate the possibility.” Researchers linked tremors in Colorado and Oklahoma to disposal wells.

“The pressure of the water put into the reservoir exceeds the strength of the rock, and bigger faults have opened up and we have felt an earthquake,” Burberry explained.

The processes used by operators of injection wells can minimize the potential for man-made tremors said Burberry. It is primarily dependent on the pressure used at the well site to force the fluids into the ground.

“Too fast is a problem,” Burberry said. “You run the risk of causing some big fractures but lots of water at a relatively slow rate is a much more manageable process.”

Harmon Maher, Jr, with the Department of Geology at the University of Nebraska at Omaha cautioned that “the risk (of earthquakes) will increase in time.” He also reviewed the Terex application documents at the request of NET News. He pointed to research that indicates wastewater operations in Oklahoma “injected so much fluid they started connecting with older faults” which resulted in a cluster of quakes that continue to this day.

Maher noted in its application Terex promises to use water pressure levels that are quite low which could reduce the chances of any underground disruptions.

Gottlob, the geologist for Terex, called the prospect for earthquakes in the panhandle “highly unlikely.”

“We are not in that fracture zone,” Gottlob said. “As far as I know, there are no known fault zones running through this part of the state that we would be lubricating and stimulating” with the injected water.

Many of the landowners notified felt the legal notice provided by Terex through the Oil and Gas Commission was so vague it disguised the nature of the project when it was first made public late last year.

After some additional research Grove was surprised to learn the well, planned for operation 24 hours a day and seven days a week, would dispose of millions of gallons of saltwater. 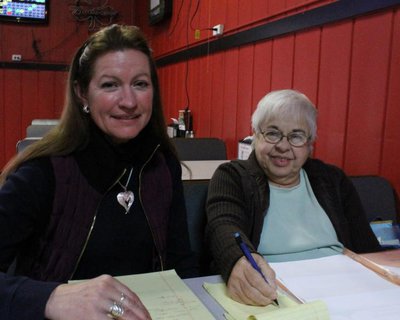 Rosemary Enlow, a homeowner in Morrill who also opposes the project, agrees the short application is too short on details.

“Every time you start to read it you come up with more questions,” Enlow said. She says Terex “saw an open gate with no laws and no restrictions and they could just come in and start.”

“I think we all need to be good partners,” Enlow added, “and I don’t see a partnership” between the residents and the developer.

Risks of pollution and seismic jolts depend largely on the proper operation of the injection well. The staff of the Nebraska Oil and Gas Commission have sole responsibility to monitor the safe operation of the well.

The Commission’s executive director, Bill Sydow, said he is “100 percent confident that this operation can be permitted and regulated safely and efficiently.”

Sydow insists his staff has demonstrated it has the experience and expertise through its oversight of injection wells and traditional oil fields.

Sydow and Gottlob of Terex acknowledge Nebraska has a less demanding regulatory structure for disposal wells compared to neighboring states which can make the approval process faster.

“We are highly efficient in what we do here in the permitting process,” Sydow said. “We don’t cut any corners. We know exactly what goes on in the permits, but we can handle them in a more timely basis.”

Opposition has steadily grown in a matter of weeks. On Monday, according to the Scottsbluff Star-Herald, Sioux County Commissioners faced an overflow crowd requesting the county pass a formal resolution opposing the project.

The Oil and Gas Commission must hold a public hearing before voting to approve the application. That can happen only after Gov. Pete Ricketts appoints someone to fill a vacancy on the three-member panel.

Keystone XL Pipeline Back in Court. Here Are the Questions You Should Be Asking
Medicaid petition drive launched; Larson charge pipeline opponents got Russian money denied
Nebraskans could vote on medical cannabis; senators fight over where bills on pipelines, guns are heard