The Oglala Sioux Tribe, headquartered on the Pine Ridge Reservation in South Dakota, is building a nursing home near Whiteclay, Nebraska. People involved hope the project will help tribal elders, and younger people as well.

On a hill just south of Whiteclay, Jacob Cottier’s hammer pounds like a drumbeat, as construction superintendent Gary Eagle shows a visitor around. “This is the entryway, and as we walk in, there’ll be a fireplace right in the middle here. And over on the right hand side, there’s a little coffee nook there,” Eagle explains. He's describing the nursing home the Ogalala Sioux Tribe is building near Whiteclay – a $16.5 million, 51,000 square foot structure that will be home to 60 residents, with the possibility of more later. 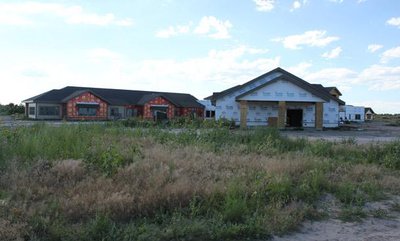 Duane Brewer of the Oglala Sioux Lakota Nursing Home Board says those elders are currently scattered from Rapid City to Minneapolis. And that can isolate them from families who live on the Pine Ridge Reservation, just across the South Dakota border from Whiteclay. “It’s just hard for some of the families to have the money or a vehicle to go visit them. Now that we can bring ‘em back, they can go see ‘em all the time,” Brewer says.

Brewer says the project will be good for younger tribal members, as well. “Eighty to a hundred jobs is what we’re looking at… that’s a good chunk of people to put to work,” he says, adding “It’s the greatest thing that could happen for us in a long time.”

With unemployment on the reservation estimated as high as 80 percent, those jobs – in everything from nursing to housekeeping, food service and laundry -- and the income that comes with them will have a big impact, predicts Ron Ross, president of Native American Health Management, the company that will manage the home.

Alcoholism on the Pine Ridge reservation

“When we have 80-100 employees, it’s probably going to have somewhere around a seven to eight million dollar a year impact. And salaries (will) probably be $4 million of that, give or take,” Ross says. “It’s going to be huge.”

The effect of nursing home jobs could go beyond economics for young tribal members, says Cottier, a 24 year-old tribal member working as a construction laborer on the home. “It gives people opportunity to learn something new, and something to look forward to every day when you get up,” he says, adding for someone who has been unemployed, a job “probably helps them straighten out their lives instead of having to live in poverty… and having to bum money.”

The Shakopee Mdewakanton Sioux Community of Minnesota, which operates that state’s largest casino, loaned the Oglala Sioux $13.5 million for construction, and Ross says the tribe put up $3 million. The loan will be repaid, and operating expenses reimbursed, by the federal government through Medicaid.

Ross, formerly Nebraska’s state treasurer and before that head of its Health and Human Services system, says the project won’t cost the state anything. “In most Medicaid, in most nursing homes, the state has to participate in general funds. As a tribal facility, the state of Nebraska does not put any money towards the Medicaid match. This is all federal dollars,” he says.

The nursing home is being built less than a mile from the village of Whiteclay, where four stores sell two to three million dollars worth of beer every year, mostly to residents of the reservation. The tribe’s Duane Brewer says the nursing home can change what people think of when they hear about Whiteclay.

“We have a real problem with alcohol on the reservation, and of course Whiteclay contributes tremendously to that. But just on the other side of that there’s a different story. We’re going to bring our elderly back, and put people to work. Hey!” he says.

Nursing home board member Leonard Little Finger says the nursing home may be located in Nebraska on the map -- but there is a larger significance to its location for the people who will live there.

“If we go back in the history, that was the land that we lived on. In those times there were no boundaries. We essentially followed the buffalo. It’s inconsequential to the current boundaries. It is back home, again,” Little Finger says.

Officials hope the first new residents will move in early in 2016.

Editor's note: This story is part of our "Best of 2015" Signature Story report. The story originally aired and was published in July..